Egg colour table for all chicken breeds with images and productivity.

You may need to rotate your device to see this page better.

This page might look odd but we have had to remove some of the formatting to get the table to display properly.


Egg colour is hugely subjective and often he source of much disagreement among keepers. A friend and I often argue over eggs I would call cream but he reckons are brown.

Which chickens lay which colour eggs?

The colour of the egg is the result of pigments being deposited during or after shell formation inside the oviduct of the chicken.

Egg colour is genetic and can vary between hens of the same breed and even from the same hen over the course of a laying season.

Please bear in mind that this is a general guide and there is a great deal of variation between hens of the same breed.

All egg shells are made from calcium carbonate and are either white or blue with all other colours being produced by various shades of pigments laid down on the surface of the egg as it is being made.

The brown pigment that is laid down on the surface of the egg is called protoporphyrin IX, which is an iron compound similar to the haemoglobin in your blood.

What are the different colours of chickens eggs?

Below: Here is a grey egg amongst a selection of other colours. It's not a trick of the light or photo-shopped and was laid by an Araucana cross Cream Legbar owned by Magners farm, Fethard, Co. Tipperary Ireland. 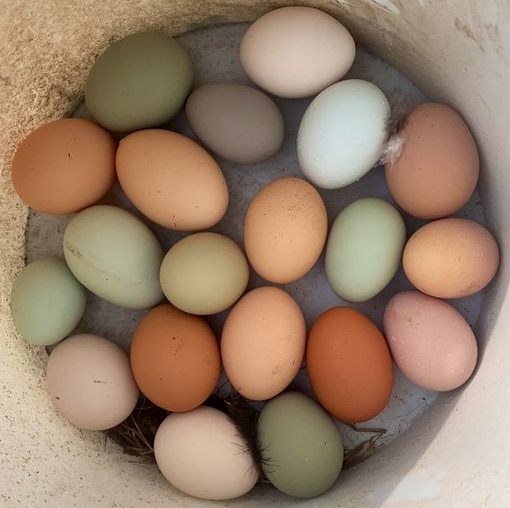