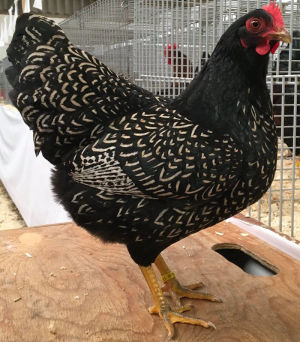 What is a Barnevelder?

The Barnevelder is a large, soft feathered chicken and a good layer of brown eggs that originated in the town of Barneveld in the Netherlands. Both bantam and large fowl Barnevelders exist with both solid coloured and laced feathering.

Barnevelders are easy to keep good natured chickens that prefer to be free ranged.

The Barnevelder was the first pure breed chickens I started breeding almost 30 years ago and they have had a special place in my heart ever since.

Below: Some of my flock of Barnevelders.

Primary use: Dual purpose and exhibition.

Origin: The town of Barneveld in the Netherlands

Cold hardy: Yes, the Barnevelder is covered with soft feathers and has a small comb

Useful to Know: A good layer that is an active forager and a reliable winter layer. Easy to tame and poor flyers.

The Barnevelders head is medium sized but wider and deeper than normal with a single comb which is quite small 4 to 6 teeth. Both sexes posses a single comb and have prominent orange eyes and yellow legs.

Below: A blue Laced Barnevelder hen.

Barnevelders are a full bodied, wide and heavy for their size and all feather patterns and types should have the beetle sheen on the feathers.

The most popular colour is the double laced, giving rise to dark hackle feathers that are tinged beetle green.

Barnevelder bantams are exact replicas of their large fowl counterparts and so standard, defects and scale of points apply.

Below: The Adults getting sprouts.

Barnevelders come in a wide range of colours and feather patterns. Solid colours include black, white and dark brown while the laced varieties include blue, gold and silver double laced, Partridge and splash. Silver-blue, Chamois, Isabel and auto-sexing barred also exist but not all types are in the standards in all countries.

Brief history of the Barnevelder:

The development of the Barnevelder as a breed owes more to it being a producer of fine brown eggs. Around 1899 when the breed was fist documented there was considerable variation in the feathers and it wasn't until 1921 that the Dutch association of Barnevelder breeders was formed and a standard for the breed was put in writing.

Eggs and birds were imported into the United kingdom that same year and the British Barnevelder Club was formed in 1922.

In the years that followed new colours and feather patterns were added to the breed standards, including the bantam size.

What colour eggs does the Barnevelder lay?

Barnevelder eggs are a glorious chocolate brown colour that gradually fades during the season but returns after the moult.

Below: The eggs from the Barnevelder.

The eggs have never been really dark like the Marans and hatchery birds often produce an assortment of browns from cream to dark.

Are Barnevelder good layers and how many eggs do they produce?

For a rare breed the Barnevelder is a good layer, producing as many as 200 eggs per year in their first year reducing by 15% after every moult. Mine produce well for at least 5 years.

The real delight is that Barnevelder hens have a long laying season, often as much as 10 months of the year.

How old are Barnevelder chickens when they start laying eggs?

The Barnevelder is slow to mature and won't produce eggs until they are 28 weeks of age and sometimes even longer.

Barnevelders, in my experience have an excellent temperament and have been docile and friendly members of the flock.

Below: Here are some of my Barnevelder bantams getting treats. You can see there is two cockerels in the group.

How big is a Barnevelder chicken?

The birds are a dual purpose medium to heavy chicken

Where do Barnevelder come from?

This bird originated in the Netherlands and was imported to the UK & US in the early 1920′s.

The Barnevelder is thought to have Cochin, Langshan and Brahma genes in it’s breeding. Also very popular is the bantam variety which was developed in Germany by crossing the smaller birds with bantam Rhode Island Reds and Gold Laced Wyandottes.

Do Barnevelder need any special care?

The Barnevelder is a sturdy and hardy breed that copes well with cold, mine live happily in North Yorkshire where we get some very bad and cold weather and they are fine.

This breed can be lazy, so make sure your hens are free ranged if possible so they don’t get too fat or they’ll stop laying.

As for space the Barnevelder needs the same as any large fowl chicken and as they are good foragers ensure you have a large grass run they can use, to make sure they get some exercise and fresh greens.

How long do Barnevelder chickens live?

Mine have proven to be quite long lived chickens. Barnevelders can live for between 7 and 12 years and I have two hens that are at least 11 years old.

I have found all of mine to be good natured over the years. All roosters will fight if they have to but I don't think I have ever seen my cockerels start a brawl.

It is the only breed I have seem where the males will brood chicks and I keep severel together in some of my breeding pens with little trouble.

Mine are average when it comes to broodiness, being neither repeated sitters like Silkies and non-broody like hybrids. They are most likely to go broody in their second or third season and sometimes both.

Below: A Barnevelder mum with her chicks.

I have found my bantams to be more broody that the large fowl.

It seems that docile chickens like these do get broody quite often, but the hens do make excellent mothers.

Where to get Barnevelders and how much to pay for them:

Barnevelders are rare, especially good quality specimens. Hatchery quality birds can be had as day old chickens for $3 to $5 each. The Double laced is the most common and any other types or colours are mostly in the hands of breeders and hard to find.