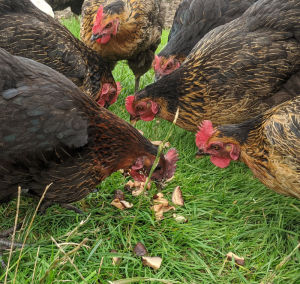 Fungi are complex and difficult to identify. There is scientifically no difference between mushrooms and toadstools but both are part of the fungi kingdom.

I did an experiment for this article and tried feeding my hens some shiitake mushrooms and at least half of them showed no interest at all so perhaps a better title would have been will chickens eat mushrooms?

Chickens can eat any mushroom that is suitable for human consumption, of which there are around 350. This is less than 1% of fungi species so the vast majority of are either inedible, poisonous or just horrid.

While there is no clear scientific distinctions between mushrooms and toadstools it is best to treat all toadstools as poisonous and make sure they are never fed to chickens and are removed from and coops and runs.

Below: My chickens eating cooked and chopped Shiitake mushrooms.

Cooked mushrooms are better and more easily digested. Any mushroom that is poisonous to humans will effect chickens, including the hallucinogenic ones.

The other thing I noticed is that when mine get into the compost they do like the mycelium. This is the fine white underground parts of the fungus.

Some mushrooms are edible but to tough and fibrous to eat. I have a few patches of wax-cap in the 4 acres of my grasslands where the hens roam and they tend to leave them well alone.

Are mushrooms good for chickens?

Typical store bought or home grown edible mushrooms are low in calories and sugar, high in protein and vitamin D, and a source of vitamin B12 so they are a good foodstuff for chickens in small amounts.

The problem will come if they are leftovers from your table and have too much added salt.

Which mushrooms are toxic to chickens?

It depends on where in the world that you live but between 2% and 4% of mushrooms are deadly poisonous and a further 20% to 30% are somewhat poisonous or cause illness. Of what is left at least 60% are inedible, which is a considerable number.

Below: When I was a kid, these were called toadstools. They are Fly Agaric, quite common and poisonous.

Consider all mushrooms off limits to chickens unless they are store bough, home-grown or you are an experienced forager.

Can chickens eat mushrooms growing in my yard?

This is an interesting question as although I have lost chickens over the years I have never thought it to be from eating mushrooms.

Below: For this article I walked the whole of my four and a half acres and found all these mushrooms. None of them had beak or peck marks.

I have never seen my hens eating wild mushrooms growing in my fields and I have a lot of birds and spend considerable time with them.

You should avoid letting chickens eat any wild mushrooms in your yard. Accurately identifying which species of fungi are fruiting in your backyard garden can be difficult.

I have from time to time seen them eating the mycelium from the compost heap but these are likely to be growing from discarded store bought mushrooms.

Some wild mushrooms contain parasites or certain species of microbes and could easily make chickens sick after eating.

Dealing with toadstools, mushrooms or fungi in the chicken pens:

Fungi grow on decaying organic matter and can pop up anywhere, mostly after rain. While wearing gloves, pull up any fruiting bodies and discard in a dust bin.

Try to avoid digging or disturbing the ground as that will bring the hens in to see what you are up to.

Which mushrooms can chickens eat?

For the purposes of this article we can divide fungi into two types, cultivated and wild. The cultivated mushrooms are grown in commercial operations and bought in stores and groceries. The wild ones grow anywhere there is enough moisture and you need to be an expert to identify them.

Below: My chickens were a bit unsure about mushroom.

When it comes to poultry and mushrooms it is best to give your hens the same store bought ones that you eat.

The most common types of edible mushrooms that chickens can have include:

To get my chickens to eat mushrooms I needed to cook and chop them up.

Chickens it seems have a natural in-built ability to avoid poisonous foods and that includes mushrooms. When I gave them plain button mushrooms they all just left them alone.

Don't forget magic mushrooms will have the same effect on chickens as humans except it is likely to be fatal.

Making a mistake and eating the wrong type of mushroom can cause bleeding, digestive problems, nerve problems, kidney failure and death.

What if my chickens have eaten wild mushrooms?

Being omnivorous foragers, chickens eat whatever looks good and can fit in their beaks, that said they intuitively know not to eat certain things and if they do try to eat mushrooms they will likely leave them after a peck or two.

If you are worried about your hens eating wild mushrooms, take a walk around the pasture after rain and see if there are any about and collect them all up.

For what chickens can eat, or not eat.