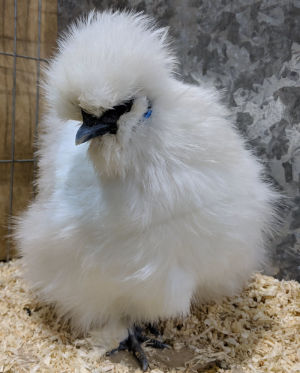 Size: Bantam and large fowl depending on where you live.

Useful to Know: The extra toes and feathery feet can cause issues

It was once thought that Silkies were the inspiration for the Tribbles of Star Trek which is hardly suprising given the behaviour of both.

Below: A white Silkie growers at 6 weeks old.

Below: A show winning silkie hen.

What are Silkie Chickens?

The Silkie is a peculiar breed of chicken that has been selectively bred to carry a gene that causes their feathers to lack structured “barbules”, which are the tiny individual hair-like strands on each feather’s quill that, when connected in an orderly and uniform fashion, create functional and practical feathers for avian flight.

Below: A Silkie hen close up. You can see the black skin and the blue ear lobes as well as the fluffy feathers.

Other notable features include shaggy feathered legs, metallic light blue earlobes, and five toes on each foot instead of the usual four, a rare trait shared by only a small few other breeds – and, last but not least, it’s breed standard for Silkies to have black skin, bones, and blood.

​A Brief History of Silkie Chickens:

Silkie Chickens come from ancient China, with some contribution from Java and India.

During his travels in Asia dating as far back as the 13th century, even Marco Polo tells stories of his sightings of oddly furred chickens.

Silkies originated in the Far East, where they are still kept (and eaten) today. They have black skin and bones and 5 toes instead of the normal 4. In addition, Silkie hens make wonderful brooders and mothers, and are even known to adopt baby ducks if given the chance!

The breed was officially recognized in North America by acceptance in to the Standard of Perfection in the first year of publication which was 1874.

It was not until the mid-1800s that Silkie Chickens had made their way into the West. By 1872, they finally made their debut into the American Standard of Perfection, and have been quickly gaining in popularity ever since!

What colours do Silkie Chickens come in?

The standard colours are by far not the only colours, just the colours recognized in the standard of perfection, there is also red, cuckoo, tortoiseshell, calico, paint, lavender and many others.

A well bred Silkie is a stunning sight to behold. The larger the crest on the birds head and puffs on the cheeks the more difficulty they have seeing in a free range environment. Some careful trimming around and in front of the eyes with scissors a couple times a year takes care of this problem.

Take note that the appearance of Silkies from hatcheries and from breeders is vastly different. These make ideal pets and projects for children and those that dislike dealing with birds that are rowdy and active.

Many breeders are still hard at work to create and perfect many more eye-catching and exotic new colour varieties of Silkie Chickens, such as Paint, Cuckoo, Lavender, Red, and Splash.

How do you sex Silkie chickens?

There are only 2 guaranteed ways to sex a Silkie chicken, DNA and vent sexing.

You can sex Silkie chickens by:

Sexing Silkies is difficult as the are slow growers, you should never cull a bird until you are sure.

Silkie Chickens can live in a coop with any other similarly gentle-tempered breeds, making them just as much, if not more low-maintenance as any other chicken.

Something important to remember is that Silkie chickens are entirely flightless. This comes as a disadvantage in a large, open yard with predators abound, such as a stray cat, dog, or even wild predators like coyotes and hawks.

Even though most chickens are already poor fliers, the Silkie is an even easier victim. Coops should have a sizeable run with access to grass, so that you can keep your Silkie contained comfortably and safely when you’re not around to supervise free-ranging times.

Although Silkies are birds, some small grooming from time to time can be expected. Silkie Chickens won’t get knots and matting in their fluff, but their feathered feet can collect mud after a heavy rain, causing discomfort for the bird and a big mess for anyone thinking of bringing the bird indoors.

Bathing Silkie Chickens kept outdoors is seldom necessary, as chickens are generally hygienic animals that keep themselves well-groomed with dust baths to cool off and remove bugs, as well as constant “preening” (this is when birds skim their feathers with their beak to remove any grime, and to make them lay in an orderly way).

Baths are not required as part of keeping Silkies any more or in any circumstance different from any other chicken breed. Baths do tend to make them look fresh, airy and extra fluffy and whether to bathe regularly or not is more a matter of personal preference rather than need.

Breeders that have many often don’t bathe unless they are preparing for a show or have a health situation that calls for it, some that keep them for house pets bathe regularly to keep them looking their fluffy best.

A Silkies feet can be problematic because they have extra toes and heavily feathered legs which means they often get caked in mud and are susceptible to parasites.

What do Silkie chickens eat?

Silkies chickens need the same feed as any other chickens, a quality pelleted feed, a few scratch grains, the odd treat and whatever they can find while free ranging.

If you have bantam Silkies there are a few companies that make a smaller pellet specially for smaller beaks.

Do Silkie chickens lay eggs that you can eat?

Silkie chickens do lay eggs you can eat and they are delicious. Because they lay so few, the eggs which they do produce are of very high quality with solid shells and bright yolks.

Below: A display of 6 Silkie eggs  in a poultry show.

How many years do Silkie chickens lay eggs?

How big are Silkies?

Silkie Chickens happen to be one of the Breeds of Chicken that come in both in the typical or standard size of the average Chicken, as well as a smaller, Bantam counterpart.

Many Silkies of today are being kept as house pets much like rabbits are kept as household pets. Silkies are rather hardy birds tolerating extremes fairly well and should be cared for as one cares for any other chicken. keep a Silkie chicken indoors

Silkies are not as flighty and energetic as other breeds and are far easier to catch and manage and due to their gentle disposition, endearing personality and social nature, are delightful little characters that would make a great fit as a pet for many lifestyles and ages.

Below: Silkie chickens, even as roosters like this one, are an adorable and remarkably easy option for a pet.

With supervision, they could make a good pet for families with young children, or even as an easy, novice pet for an older child to teach responsibility and maturity!

How long do Silkie chickens live?

Silkies as a breed of chicken are long lived and will live an average of 8 years. My oldest one was a cockerel who lived to 11 but this is rare. Silkies do tend to live a few years longer than other breeds, perhaps because they are much less stressed and produce fewer eggs.

Can Silkie chickens be potty trained?

Silkie chickens poop just as much as any other chickens of similar size and can't be potty trained easily, if at all.

How cold is too cold for Silkie chickens?

How much room does a Silkie need?

Silkies need as much room as the average chicken does. They love to free range as much as the rest of the flock.

Are Silkie chickens easy to keep?

Of all the ornamental chicken breeds, the Silkie Bantam is one of the most popular and beloved, and certainly one of the most entertaining to watch. Can’t you tell why? They’re the lap kitty of the chicken world, complete with hair-like plumage and an incredibly sweet temperament.

From a glance, many might see Silkies as purely a pet animal with no other potential for other uses; this could not be further from the truth. They may be poor layers, giving out a meagre 2 to 4 small eggs a week, but they more than make up for it in other ways.

Do Silkies roost at night?

All chickens prefer to roost at night and Silkies are no exception. Silkies do like to roost and prefer to but may need help getting up to the perches. You can provide them with staging perches or a ladder to help them.

My Silkies have always roosted with my other birds and get up onto my 3 foot high perches with few problems. I just have one perch half way up. Roosting is natural behaviour for chickens and should be encouraged.

Roosters DO crow and while not as loudly as some other breeds, they do it with sufficient decibel level to alert neighbours and would not be a good choice where roosters or chickens are not allowed. The roosters in most (but not all) lines tend to be more docile and less intent on aggression then many other breeds, tending to be more laid back.

The hens primarily make quiet clucking and cooing sounds to themselves and their friends as they forage and only become loud for a very brief time as they call out an alert to their flock mates if suddenly startled or they detect danger. Generally Silkie hens will let you collect eggs from underneath them without aggression or complaint with only the occasional odd hen being willing to go as far as to peck somebody.

Silkies are greatly valued as broody hens and for their ability to incubate eggs. They have a habit of going broody more frequently than other breeds and being good mothers.

Below: A broody Silkie with her new chicks.

Likely able to be at least partly attributed to their uniquely docile temperament, Silkie Chickens are well known among chicken fanciers to be incredible mothers.

These birds have willingly accepted the neglected chicks of another inexperienced mother hen, they will sit diligently on any other bird’s eggs they are given, and they have even been seen sitting on other newborn animals in need, such as abandoned baby rabbits or kittens.

Silkies go broody as young as 6 months of age and may raise two or three clutches a year in ideal conditions.

You do need to be a little careful, I once used a Silkie to hatch 2 goose eggs and she had a fit when they dissappeared in to the water.

Silkies were historically kept for meat as well as eggs and it was valued as a medicinal food item because of its black skin and bones, and was thought to be particularly good to reinforce body immunity and protect from emaciation and feebleness.

The black flesh is often made into a soup and used to treat diabetes, anaemia, female reproductive functioning and post-partum disorders.

Where to get Silkies and their cost:

Pure bred  Silkie chickens are worth a considerable amount. A trio bred from show winners went for £240 ($320) at a local auction near me last year.

Silkie chicken prices vary depepnding on the colour and quality. Expect to pay between $30 and $60 for full grown birds.