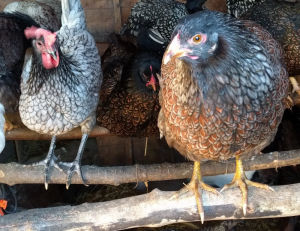 I have had a few problems over the years with chickens roosting in the trees at night or getting lost and ending up on the coop roof.

Below: Four Leghorn hens roosting in the trees at night.

I have guinea fowl in my flock and they have a habit of buggering off into the trees at night and you might find the chickens following them.

If some or all of your flock of chickens is suddenly refusing to roost in the coop at night then it is likely to be parasites in the coop like red mites, predators disturbing their nights or stress in the flock.

If it is just one or two it is likely to be youthful exuberance or bullying.

Should chickens go back in the coop at night?

Chickens that have been accustomed to their coop should go back into it at night to roost.

Below: One chickens sleeping outside is likely to be being bullied.

Sleeping outside coop can happen if birds get disorientated if you move the coop or they get trapped. It doesn't take long to change a chickens habits.

Why do my chickens not go in the coop at night?

If you are sure that your chickens are used to your coop and have stopped using it there may be a few reasons.

In the wild if a flock of jungle fowl were being bothered every night by the presence of predators they would move on and find a new roosting spot but they're not able to in your backyard.

Fleas, lice and mites inside the coop can drive chickens to distraction and really bad infestations can make chickens unwell. Your flock will choose to stay away from parasites if it can and may refuse to enter the coop at night.

Growers and especially young cockerels seem to think it's just fine to spend their nights in the trees and shrubs in your garden. It may be because the alpha rooster is giving them a hard time.

Young chickens are also slower to learn and easier to frighten.

Below: The problem is not limited to chickens, here is some ducks on a roof!

If your coop is too small or overcrowded then it is likely that there is stress and bullying amongst your birds which can lead to some of them finding a more peaceful place to roost.

Chickens like to roost above a certain height, it makes them feel safe and small coops are often quite small with low roosting bars.

If you haven't got your hens used to their coop by shutting them in for three days then they may struggle to get themselves back in through the pop hole to go to bed.

Lack of ventilation can lead to a build up of ammonia which chickens will avoid if they can.

Below: Small coops like these can be problematic from both a size and ventilation point of view.

If just one or two chickens won't go in coop at night, they may be being bullied.

Over the years I have had a few breeds of chicken where this was more of a problem. Leghorns, Old English Pheasant fowl and German bush fowl have been problematic for me in the past.

Why have my chickens have suddenly stopped going into the coop at night?

Adult chickens that roosted normally before but have suddenly stopped going back into the coop at night means that either they have been scared by a predator or there are mites and parasites in the coop.

You can check the perches at night to see if red mite or other parasites are present and use a trail-cam if you need to check on predators. For information of how to use Diatomaceous earth to keep parasites out of the coop - https://cluckin.net/diatomaceous-earth-and-how-to-use-it-for-chickens.html

Do chickens need light at night in their coop?

Lights turned off suddenly can leave chickens on the floor in the dark. Artificial light for chickens - https://silkie.org/artificial-light-for-chickens.html .

What time do chickens go in the coop at night?

Chickens lives are controlled by light levels and bed time for your flock has more to do with brightness levels than time. Chickens begin to roost 30 minutes before dark.

How to get chickens to go into the coop at night:

The first thing to do is make sure there are no parasites pestering your chickens over night.

The second is to shut them in the coop for at least three full days so as they all known where home is.

Chickens roosting outside at night is a common problem with growers and younger birds so keep a close eye on your unruly teenage chickens.

Can chickens stay in the run at night?

If your run is completely secure then you can leave the hens in the run overnight. All my hens are free ranged from dawn to dusk and I shut them in the coop securely at night.

The trouble with having hens on display is it might help bring predators in to your backyard.

How to get chickens used to new coop:

Getting your chickens used their new coop is a very important first step in keeping a happy flock. Chickens that know where their home is will come back every night without fail and roost before dark, rather that you running around in the near dark trying to get them into the coop.

Step one - Shut the chickens in the coop for 3 days and 4 nights and let them out as normal on the fourth day. They can be allowed into the run if it is completely enclose but must not be allowed to free range during the frst three days.

Step two - Keep the feed in the coop for a few days so they come home to feed.

There is little else to be done and you may need to repeat the steps a second time.