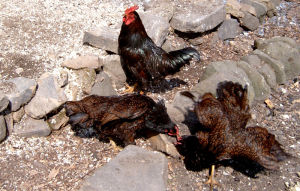 Both Cockerels and hens will fight, sometimes with each other. The most common reason chickens fight is over establishing a pecking order. Keepers often see squabbles with new hens in the flock or as young chickens grow up and find their place.

Cockerels fight all the time but serious disagreements are very rare amongst hens. I have had to wait three years to catch these two and it was all over in less than 10 seconds.

That said the most brutal fight I have ever witnessed between chickens involved two Old English Game hens with chicks. Chickens keeping is always full of surprises.

Below: A disagreement between two hens.

Most fighting and squabbling between hens is over pecking order, food or perch space and mostly involves posturing, feather (or comb) pulling, sumo style body bumping and jumping on your opponents head with lots of wing flapping and raised hackle feathers on the neck.

Below: Comb pulling amongst hens.

These sorts of disagreements are normally over in a flash and are nothing more than preserving the pecking order, they also rarely result in any injury. Hens rarely waste energy so any fights that last more than half a minute or are repeated are ones you will need to keep an eye on.

Why are my chickens fighting?

Below: This is the sort of pecking order dispute most backyard keepers see amongst their hens.


As a rule, hens do not fight like roosters but will do so for these reasons:

Cockerels fight as a matter of course and the only way to introduce a new cockerel into the flock is from very young to allow it to mature. Two adult cockerels will normally fight all the time unless they have grown up together. We have 4 Barnevelder roosters and they all live happily together with no fighting between them.

It is best to introduce new hens at night so as they all wake up together in the morning, see this page for how to add new chickens to an existing flock.

When should you intervene to stop the fighting?

You should step in to stop the fighting if:

Not all flock violence requires your intervention. Occasional scuffles are normal, but when it’s obvious that one hen has become an outlier and she’s being injured, she needs human help. It is rare that fight between hens go on for more than a few minutes or do any real damage so when it does this is when you need to step in and stop things.

Below: Happy chickens in a mixed flock with Guinea fowl.

That said, it does happen that a well aimed peck draws blood from a comb. Chickens peck at blood repeatedly and it will get worse very quickly. Also pulled feathers bleed and some surprisingly large sores can be opened up with repeated pecking.

Sometimes the only solution for bullying is to remove the picked-on (and hen-pecked) hen and keep her separately - not ideal, but some people put some wire netting across the hut so she has her own space and the others cannot get to her.

Hens will always pick on one which is a bit weaker, but if they get used to her being near, it will reduce the chasing round the garden. As far as they are concerned, if she is not with them during the day (and as they sleep at night and she is there is doesn’t count), she is not part of the flock and, therefore, will be chased away.

How do I stop my hens bullying and attacking each other?

The only way to stop chickens fighting is either to let them get on with it until one submits, or separate them from each other. This might be doable with two cockerels but you can't be separating your flock of hens into small groups all the time.

I have found over the years that the biggest causes of fights amongst hens are either broody hens or young pullets that are just maturing and are trying to work their way up the pecking order a little.

You can try to stop chickens from fighting in the following ways:

All methods will require a little patience.

Try these simple methods to keep the peace in your backyard flock:

When it is dark bend some really strong herbs in a blender like rosemary or sage and rub it all over all of the hens and the coop. Then put everyone to bed, you may have to manually put them on their perches and do not worry to much if one flaps down.

Next sprinkle some sunflower seeds and a little split maize on the coop floor. When they wake up the next morning they will all smell the same and have feed to distract them. This is by far the easiest and most successful method I have used. It may need repeating 2 or three times.

Split the feed and water into two areas at least 8 foot apart. This takes away some of the proximity bad feelings around food and water time and means that the bullied hens are not competing for food and water.

Free range. More space and the ability to escape when picked on. A confined hen will soon succumb if bullied in an enclosed coop and may be killed.

Distractions like more perches or a swing, a hanging cabbage or broccoli or a pecking block will take their minds off strife.

Make sure they have a dust bath.

Identify the bully and separate her in a dog crate or something similar till things quiet down but this may just postpone the problem.

Give her a taste of her own medicine. I had an old colleague who kept hens near me a few years ago who used to bully a bully hen until she submitted. He used to grab the hackle feathers and hold her on the ground for a minute or two with her legs held to the side so she couldn't kick. It worked for him and I have seen mixed results with this method. He was just making the most of his position as flock master and using the chickens own methods. Don't try it if you are not comfortable with it.

Get rid of the bully.

Get a rooster. If you can. They tend to keep the hens in order but it depends how many you have. More than a dozen is probably too many.

A water pistol. A few well aimed squirts at the bully just as she is going for the others may well do the trick. It will certainly distract her. I was amazed how well and quickly this worked.

Pinless peepers. Stop the hens being able to see their target. Not sure I approve of this but if you are desperate give it a whirl. As its is interfering with their natural behaviour it may be illegal in Europe.

Will chickens kill each other?

Although it is rare, chickens can kill each other when fighting. Apart from cockerels, I have only ever seen hens fighting to the death over chicks.

Even if the bird is not killed there will be stress, she will suffer mentally and be afraid.

Then there is the lack of food and water followed by loss of feathers if the stress is extreme.

When blood is drawn chickens can become cannibalistic.

She will likely stop laying and the rest of the flock may be disturbed as well.

Why is my rooster attacking my hens?

It is common for young cockerels to challenge hens in the pecking order. This is something I witness a lot, the young roo's are growing up but are not brave enough to challenge an alfa male to a dual, so they pick on the hens as they see them as an easy target.

It can also happen if you add a new rooster to the flock and one or two of the higher ranking hens refuse to submit to him, this can end in a fight as he tries to dominate her.

A third and much less common reason is a hen that has a damaged ovary and has taken on some male characteristics.

Why do chickens attack injured chickens?

Chickens will attack sick or injured birds to drive them away from the flock so that predators are not attracted to weak birds.

This is a communal survival strategy that has evolved because it benefited the flock overall.

Why are my baby chickens fighting?

Baby chickens fight as they grow up for the same reason large fully grown chickens fight, to establish a pecking order in the brooder.

Even when very young chicks will chest bump each other and will normally begin to assert their dominance over the other chicks within 4 weeks of hatching.