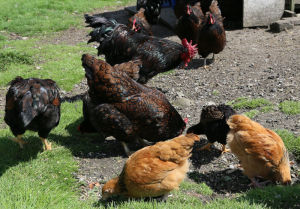 Keeping small flocks of chickens is always a challenge, and the feathers that start flying around when sweet and seemingly docile hens turn instantly from Jekyll into Hyde can be horrific, especially when young birds are involved.

Below: 2 hens fighting for dominance.

Choosing when to introduce new chickens to your existing flock is one of those things that most backyard keepers dread but it is something we have to do occasionally as we get new birds to renew the flock.

Over the years I have integrated quite a few flocks over the years and there are a few things you can do to make it easier. New chickens getting bullied by the original flock

One of the things my grandfather did was to swap roosters about just before mixing flocks or borrow one in for two weeks or so. In the next few days the rooster will establish his dominance and that is the time to add new flock members.

How do I introduce new chickens to my flock?

Adding new chickens to and existing flock is always going to stir up the pecking order and lead to unrest in the ranks and one of the most successful ways to ingrate two groups of chickens is to cause the unrest and upset the pecking order yourself just before you mix the birds up.

Below: You can see from the video that the hens may need to fight more than one battle for their place in the pecking order.


There are a few things I always do, the first is to make sure they can see and get to know each other for a few weeks before hand, seperated by a fence.

The second thing is to make sure that the young chickens always have a place to escape to.

When it comes to adding new chickens or mixing the flocks, I always do it at night.

Get a strong herb like rosemary or sage or lavender and blend it up in the food processor. Rub it all over all of the hens and sprinkle it in the coop and run and put them all to bed in the same coop. Now when they wake up in the morning they all smell the same.

Be there in the morning when they get up with treats and anything you have to distract them and always have two food and water sources for a while.

Other things that work are removing the dominant hen from the original flock for a couple of days when adding the young in or to add a rooster (borrowed for a few days) in at the same time.

Both methods rely on disturbing the pecking order which does cause chaos for a time, although this is the likely outcome for a few days regardless of the method you use.

It might look brutal but in reality the hens are not trying to injure each other, they in a mental and physical trial of strength to find the dominant one.

At what age should you introduce new chickens to the flock?

Young chickens should be at least 12 weeks of age before you add them too the existing flock. A well aimed peck on the head of young chicken can kill it stone dead and older birds are more resilient.

Below: Look out for warning signs like raised hackles. Bantams are just as bad as large fowl hens, a chickens size is all in the mind!

With true bantams like Pekins I would always wait until they were 16 to 18 weeks old and would increase the "getting to know each other time" by 2 weeks.

When is the best time to add new chickens?

The best time to add new chickens to your flock is late in the evening or at night when the older birds have begun to roost.

If you can place the youngsters on the roosts then that is the best procedure otherwise add them to the coop floor and see if they begin to perch.

Chickens tend to be more calm at bed time as they settle down for the night and this is time to introduce new birds.

It is a possibility that chickens could be killed when mixing or merging two flocks but it is highly unlikely.

Below: Serious injuries are rare but can happen.

The only time it has happened to me is when the birds being added into the flock were too young.

How long does it take for hens to accept new hens?

The fight will continue until one hen submits and withdraws from the fight and they may fight two or more times over the course of a few days.

The pecking order in a new mixed flock should settle down within 3 days but it could happen in minutes or disagreements in the pecking order could drag on for three months.

My flock of Barnevelders never seems to have a disagreements lasting more than a few minutes where as the Leghorns are a different matter.

How do you stop chickens from pecking new chickens?

How to integrate chicks or baby chickens into flock:

I am going to preface this section by saying that the most brutal and costly (for me) fight I have ever seen amongst a flock of chickens was between 2 hens with chicks and the sound of the chicks bleating only spurs them on. In the space of around 30 seconds one of the hens was blind in one eye and three chicks were dead and she drew blood from my arm.

My advice is to keep hens with chicks separate until she has begun to roost again. By this time the chicks may be old enough to hold their own against the flock but you still need to use care and judgement mixing birds.

A mother hen with baby chickens can be allowed out to free range with the flock if there is plenty of space, this way they can get used to each other in a gradual way.