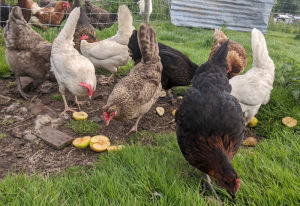 My chickens go nuts for apples! They do get them every year and they get all my left overs from making cider as well.

I even went so far as to plant 4 apple trees and a few crab apple on my land where the hens free range and on more than one occasion I have found the hens in the trees trying to get the apples from source.

Below: My egg flock eating the windfall apples.

Is it safe for chickens to eat apples?

It is perfectly safe for chickens to eat apples, including the skins and the seeds. Yes, the seeds have a tiny amount of a poison inside but your chickens will never get ill on the 6 to 10 seeds inside of an apple.

Chickens will not gorge themselves on apples unless they are really hungry so as long as you are providing them with a balanced nutritious diet otherwise, small amounts of fruit in the diet will do no harm.

Mine spend a few minutes on an apple and then move on and when I give them my pressings left over from cider making, it comes as a solid lump they peck through over the course of a few days.

Below: My chickens love apples.

I'm going to add my grandfather spent nearly 40 years keeping hens in an orchard with apples and pears and his hens were always healthy.

What is the deal with apple seeds, why are people so worried?

Below: I have never removed the seeds from apples and it has never done my hens any harm.

This is more of a theoretical risk as the body rapidly detoxifies cyanide and you struggle to eat enough seeds to do yourself any real harm.

The same is true for your chickens, they would need to eat in a single dose, around 2 tablespoons of apple pips to do them any real harm.

Also there is some evidence to suggest that these minute quantities of cyanide act as a bio-fumigant and are actually beneficial.

Is apple good for chickens?

Apples are good for chickens up to 5% of the diet and make a tasty treat, but too high in fibre and carbohydrate and too low in protein to be a large source of food for your flock. You won't be able to reduce your food bill much by adding fruits into the diet.

Remember to not over do, or you'll get watery poo and dirty bottoms.

Cooking and Cooked apple is fine for chickens as long as it does not contain too much added sugar.

Apples that are bruised or have gone brown are fine.

Apple sauce is sweetened and devoid of nutrition and should not be given to chickens.

Apple cider or juice should be avoided as it is mostly sugar.

Alcoholic or hard apple cider must never be given to chickens as alcohol is poisonous to birds and will kill them quickly.

Apple skin and peelings is fine for chickens. I make apple cider every year in the fall with my own press and my flock get lots of apple mush. This is actually better for them as most of the sugar has been removed.

Crab apples are fine for chickens although they may need to lie on the ground to soften in the frosts for a week or so because they are so hard. I have three crab apple trees and they ripen later in the season and last the chickens into November.

Apple pie and desserts may be OK in very small amounts but likely have a very high percentage of sugar which should be avoided.

Windfall apples are fine and the chickens will likely find a load of bugs under the trees as well so benefits all round.

How much apple can you give chickens?

You can give a chicken as much as one quarter of and average sized apple at a time but not every day. Limit to two or three times a week.

If you have bored chickens confined to the run on a rainy day try hanging an apple on a rope for them to peck at. Or you can play a game I like to call "Chicken Boules".

Below: How to play "Chicken Boules" with apples.

Stand at one end of your run and bowl the apples down the run, the chickens will soon get the hang of the game and chaos will ensue as they run about chasing the apples.

Rotten, mouldy apples should never be fed to your chickens because they can cause illness and possibly death.

Below: This is some apples we were trying to store and the chickens got into the box and started eating them.

Apples that have gone brown are fine as this is oxidation and not rotting.