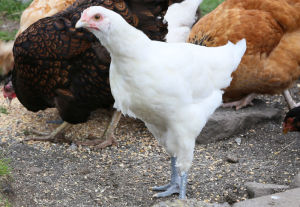 The poulet de Bresse has the reputation of being the best quality table chicken in the world. Called "The Queen of Poultry, the Poultry of Kings" Bresse matches the colours of the French flag with its blue legs, white body and red comb.

The La Bresse Gauloise, or the French chicken, is a 400 year old breed of meat chicken raised only in the Bresse region of Eastern France. It is noted for the fine quality of it's meat and was the first chickens to receive appellation d'origine contrôlée status.

This is why this breed when produced anywhere other than a legally-defined area of the historic region and former province of Bresse, in eastern France must be called by another name. In the us it is sold as "American Bresse", “Blue Feet” or “Poulet Bleu”.

Broodiness: Poor, not a broody type.

Availability: Not easy to find.

Useful to Know: A seasonal layer that is an active forager that likes to be free range.

What makes the Bresse so special?

While the Bresse is a special bird, selected for many generations to have the best eating qualities, it is much more than that.

Bresse chickens are much older when processed, they grow up for at least four months, free range in the fields full of wild plants, they are fed local grains and produce and drink local fresh water.

La Bresse must be given at least 10 square metres of ground each and when they reach 5 months old the are moved to darkened fattening sheds to stop them laying.

Below: A Trio of Bresse chickens.

They are never transported distances for slaughter, this often happens on the farm where they are raised. This local production method reduces the stress on the chickens and makes for a better product.

All varieties have a single, fairly big comb, hanging on one side at the hen, dark eyes and most important of all- blue legs. In France, this is also the nickname of the
breed: “des pattes bleues”.

Below: How an old poultry book described La Bresse Gauloise.

The defining features of the Bresse is a red single comb, blue legs, white skin, a good layer with a heavy body structure.

Below: A Bresse day old chick. You can already see the blue legs coming through.

Below:  A mixed batch of older bresse chickens free ranging.

Bresse tastes delicious and is succulent and after being allowed to free range for 4 months and finished on a special diet they are full of traditional flavour.

It is served roasted with just a little seasoning and even if portioned should be cooked in it's own skin and on the bone.

Having raised and eaten quite a few of my own over the years I can say that the Bresse is the best tasting chicken there is. Yes, I live in the UK so mine are not the genuine article, but there are the correct breed and mine a raised free range and finished properly.

Below: A home grown Bresse, plucked, dressed and ready to eat.

Three things stand out when it comes to processing and eating Bresse chickens, the fat has a different flavour and texture and the carcass has more of it. The extra fat ensures the meat is never dry and always succulent.

Secondly, the bones take up very little of the carcass, the skin is quite thin and the blue legs can put some people off.

Thirdly, the muscle fibres are shorter, resulting in a firm but more tender meat and the birds are raised longer and slaughtered later which adds depth and complexity to the flavour when cooked.

When cooked the meat is a very light colour except for the legs and thighs which have a very dark meat.

The result of this is the bresse has a deep, complex and slightly gamey flavour and succulent skin with an almost sweet and nutty taste from the fat.

Brief history of the Bresse chicken:

The Bresse is a 400 year old breed and the first mention of chicken breeding in the Bourg-en-Bresse region dates from November 12, 1591. The breed suffered during the early 1900's and nearly went extinct.

Luckily it survived and is now entrenched as the premium meat bird and has been protected under French law since 22nd of December 1936.

What colour eggs does the Bresse chicken lay?

Bresse lay between 160 and 200 large white eggs per year.

Bresse are seasonal layers producing all their eggs between late February and November and generally stop completely in the winter months.

Bresse begin to lay quite young, as a breed they grow fast and some start as early as 16 weeks depending on the season.

The Bresse chickens are calm and not shy birds at all. Mine are not friendly like some breeds and they dislike being handled. Bresse is not the choice for family pet chickens.

Below: Here are 6 bresse youngsters in with my mixed flock and they get on just fine.

Bresse chicken roosters are not aggressive for the most part, mine often grow up with a dozen or more males in the same batch and there never seems to be any fighting.

How big is a Bresse chicken?

Fully grown mature Bresse cockerels weigh 3 to 3.6Kg (7 to 8 lb) and hens between 2.2 and 2,5Kg (5 to 6 lb). The Bresse is not especially tall or big for a chickens but has a heavy, solid and muscly feel when held.

Bresse chicken need a lot of space and will eat much more feed than egg layers. They do not make family pets like some breeds and dislike being held.

Below: Bresse chickens grow fast. This is a 1 week old comparison with a Light Sussex chick.

Bresse also have a fine lightweight carcases and bone structure making them prone to breakages and injury.

How long do Bresse chickens live?

The Bresse is not a long lived bird, mine rarely live more than 5 or 6 years.

Bresse are not a broody type of chicken. I have been struggling to think if any of mine have ever been broody in the last few years.

Where to get Bresse chicken and how much to pay for them:

Genuine Bresse are rare, difficult to find and expensive. Expect to pay at least $10 for hatching eggs, $30 for day old chicks and $200 a breeding pair.

Breeding groups do exist across the continent of Europe and in the UK. I sell hatching eggs occasionally.

Bresse are available in the US as "American Bresse" but the chicks I found for sale were $30 each.

To find Bresse chickens for sale near where you live you will need to resort to specialist Facebook groups or find a breeder willing to part with eggs or birds. There is no breed society and the french never sell live birds to rear outside the region.