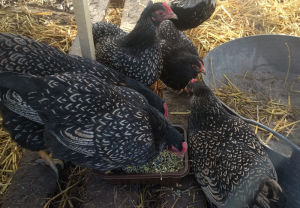 Having to clean out the chicken coop every week, especially if it means stepping out in the winter season, can be a chore, to say the least.

But you have to do it, otherwise you end up with a thick pile of droppings and damp bedding which can reek terribly when the ammonia mixes with moisture. The smell can be wafting up to your front door, or worse, even your neighbours’!

Below: Here are some young chickens of mine on deep litter.

You’ve probably heard that the only solution is cleaning out the coop regularly, about once every week. But, what if someone told you that there is a way you can take care of your chicken coop while only having to clean it out once or twice a year.

You’re probably not convinced though; it sounds so unhealthy, unsanitary, and makes you imagine how much months’ worth of manure piling up in that coop would smell!

But trust us when we say, there is a way to avoid cleaning your coop all through the winter without worrying about a smelly coop. In fact, it has health benefits for your chickens too!

This method is called the “deep litter” method.

What is the deep litter method for chickens?

The deep litter method is an ages-old, sustainable method that lets you manage your coop litter without having to replace it every week. You will need a light carbon-based bedding like pine shavings, hemp bedding or straw which will absorb the nitrogen from the chicken droppings. Over time it will create a nutrient rich, odour-free compost that will keep the chicken coop warm and fertilise your garden

It does this by allowing the bedding and waste to decompose on the coop floor and turn itself into compost, which does not smell like chicken droppings any longer. Not only does it allow waste to decompose quickly with minimal effort from you, but it also provides a bio-rich environment for beneficial microbes to bloom in.

As the name goes, it lets a “deep” mass of litter build up in the coop overtime (since you don’t have to remove it every week). However, the mass is not smelly or unhygienic because it decomposes into humus.

At the end, all you get is a pile of nutrient-rich compost-like matter that you can occasionally spread out in your garden.

What’s the science behind the deep litter method?

For the deep litter method, you will only use bedding which contains carbon, like pine shavings, paper, and straw. Pine shavings work the best for this method because they are small and compost faster.

You cannot use sand for the deep litter method because it has no carbon in its composition.

Since chicken waste is rich in nitrogen, mixing it with a carbon source will allow the decomposition process to speed up a lot. The mixture must also be exposed to oxygen, which requires turning the litter to aerate it. You will not have to do too much effort for this either, because your chickens will do that for you.

You should frequently turn it over with a shovel or rake yourself too, especially in places you notice build up and caking of waste.

So, throwing in a few handfuls of fresh bedding g every week is all you need to do through the winter - no more difficult clean-ups!

What bedding can you use for the deep litter method?

With the deep litter method you can use any of the types of bedding you would normally use for the floor of a chickens coop although some work better than others.

Below: Deep litter method done with hard wood chips. This way takes a bit longer to get going.

Pine shavings is really the best for deep litter and is cheap an easy to get hold off. Shredded paper is the worst and should only be used as a last resort and mixed with shavings.

What are the advantages of using deep litter for chickens?

What are the disadvantages of deep litter system?

There are some disadvantages to using the deep litter system to keep chickens on:

Deep litter is not a good solution for small chicken coops or those with thinner wooden bases as it will reduce the amount of air space available in a small coop and could cramp your chickens or collapse the floor.

You can't use deep litter with Omlet chicken coops.

The depth of the litter provides insulation and the decomposition process creates natural heat during the cold winter, keeping your flock warm.

In fact, the deep litter becomes such a rich biologically active mass that it not only provides sanitary absorption and decomposition of waste, but the microbes in it also produce some key nutrients like vitamins and protein which the chickens ingest as they peck around for food, making them healthier.

How to use the deep litter method in the hen house:

Now we provide a step-by-step guide for you on how to get the deep litter started and going.

Does the deep litter method work in spring and summer?

Although the deep litter method is ideal for winter, it is harder to manage in months which are wet and warm because it generates additional heat that you would not want.

I get around this problem by removing half to three quarters of the litter as the weather warms in spring.

Excess moisture in the atmosphere can impede the process but it can work year-round if you monitor the moisture levels, temperature, and air circulation in the wetter months.

It is recommended to start the deep litter process in spring so it can receive enough heat to start decomposition. Winter is not the best time to start it off because the atmosphere is dry and freezing.

A list of dos and don’ts for the deep litter method:

Does the deep litter method smell?

It can smell a little earthy, like compost but it doesn't smell bad at all. If yours is smelly you have got the make up wrong.

The deep litter method has numerous advantages other than being almost maintenance free. It is more economical too as you don’t have to clean out and replace the whole bedding frequently.

Moreover, it keeps your flock warm and happy in the winter, not to mention the health benefits it has for them.

The only issue that might arise is that the younger birds might get stuck in the deep litter and have trouble moving around.

But for a mature flock, the method is a win-win. You can finally say goodbye to the horrid stench of ammonia too!