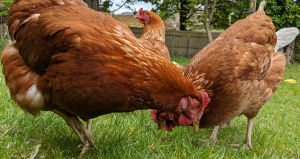 What is a Cinnamon Queen chicken?

Cinnamon Queens are a modern red sex linked hybrid chicken which are quick to start laying and produce 250 to 300 big brown eggs per year. They are easy to keep and docile in nature.

Below: Some video of my Cinnamon Queen chickens snacking on a pepper.

Since Cinnamon Queens are hybrids to begin with, there is no such thing as a "true" Cinnamon Queen. The name is a marketing tool, but these strains of red sex links are world class layers of large brown eggs. Great layers but not a heritage breed chicken.

You wont be able to show them as there is no APA class to exhibit them in.

They are supposed to double as a table bird if needed but I can safely say they are not for feeding the hungry!

This is a Cinnamon Queen, which is a cross between a Rhode Island Red male and the Rhode Island White female. Hens are a reddish brown colour, giving the breed its name, and young males are white.

Below: Here is a Cinnamon Queen hen.

Below: The Males are white.

The cockerels weigh approximately 7.5 lbs and the pullets top the scales at 5.5 lbs, so they are not heavy birds.

Cinnamon Queens are raised primarily for their egg laying abilities, they can also be raised for meat. They have compact, heavy bodies.

Cinnamon queens do need a little special care, they are a high production hybrid and require a fresh feed which contains at least 16% protein and all the other nutrients they need.

Their health and egg production may suffer if there is too much whole grains in the diet and they should be fed at least 90% of their food allowance as a quality pellet.

Below: CQ's grow fast and feather up quickly.

CQ's are delightful chickens, they are easily pleased, good natured and do well free ranged on pasture or kept confined in a run. Mine laid huge brown eggs and lots of them. They seem to be naturally tame.

You should remember that this breed was originally produced for the commercial environment where chickens have and 80 to 90 week laying cycle before being disposed off.

How many eggs does a Cinnamon Queen chicken lay?

If conditions are perfect Cinnamon Queens will lay 300 large to jumbo sized brown eggs in their first year. Production drops by 15% after every moult but they keep up the good numbers for at least three years.

Below: Here is a selection of large brown eggs from Cinnamon Queen chickens.

CQ's are good winter layers and even through the winter you will have eggs. Not quite as many as during the spring and summer but hybrids are noted for their year round laying ability.

They also seem to lay a clean egg and I rarely if ever have to wash mine.

How long do Cinnamon Queen chickens lay eggs for?

Cinnamon Queen chickens start laying eggs earlier than most breeds and well before heritage types start laying. Some may start as early as 16 or 18 weeks.

They will lay about 300 eggs in their first year if conditions are good, 260 eggs in their second and 200 or so in their third year. After that it tapers off quickly and CQ's rarely lay well for more than 3 years.

Their laying does tend to burn out quicker, due to the sheer number of eggs they lay, compared to standard breeds.

Some of my CQ's are 2 years old and their egg production has dropped dramatically and I now have one or two regularly laying soft shelled and shell-less eggs. The start early and lay well and then start to run out of gas.

They are friendly chickens, seemingly tame from the moment you get them. As a rule they integrate well with the other chickens in your flock and are naturally happy and active birds.

Below: You can see how close mine have come to me. Yes they are friendly.

What are the problems with Cinnamon queen chickens?

I've raised them for years and have not had lots of health problems with them and I know of quite a few other keepers who are happy with them as egg birds.

The breeds that make up a Cinnamon Queen chicken are both sturdy cold hardy chickens from the northern areas. Cinnamon Queens are wonderful egg layers that get their cold hardiness from their parents. You can keep them almost anywhere without having to worry about whether they are warm enough or not.

Due to their hybrid nature they are well able to look after themselves and as a rule are sturdy hardy chickens that require little extra care.

How do you sex Cinnamon Queens?

Cinnamon Queens are sexed at hatching by colour. The males chicks have white down and the hens have red down.

Below: It is easy to sex Cinnamon Queen chickens.

After the first year they will not be colour sexable any more.

No, Cinnamon Queens do not breed true. The bird you buy as a day old chick is a hybrid produced from two parents and is bred to be easily sexed. The males are white and the hens are reddy brown and if you go on to breed them a second time they will not be feather sex-able and may be all sorts of different colours.

Like breeds like, and you will still get a mix of Rhode Island types of chickens but they will not be so uniform in colour and size as the first generation.

You will have no trouble getting them to breed as hybrid vigour ensures they generally have a high percentage of fertile eggs and good hatch rates.

Where to buy Cinnamon Queen chickens and how much to pay for them:

The "Cinnamon Queen" is a marketing name hatcheries use for their Red Sex Link chickens. These are produced by crossing red gene roosters with silver gene hens and as well as being sexed by colour from hatching (male chicks are white and female chicks are red), they are egg laying machines. One of the interesting quirks of hybridization is the offspring outlay both of the parents.

You can really only buy them as day old chicks and thre best price we found for straight run chicks was $2.25 each and for sexed hens was $3.75.

Below: Bulk price deals for chicks.

You can buy CQ's sexed so it's not a problem if you're not allowed males.

Vaccination is an option from most hatcheries that sell them and you should look into it as it will benefit the health of your flock in the long run.

Will Cinnamon Queens integrate with my current flock?

Mine have mixed well with all my other birds and seem naturally docile and non confrontational.

Below: This is mine eating pellets and if you look carefully you can see some light Sussex in the background.

To help avoid egg binding make sure your hen is getting enough calcium. Like many production fowl, the Cinnamon Queen can suffer mineral and nutrient shortages easily.

If raising a large flock of Cinnamon Queen’s, you may want to consider vaccinations.

Rhode Island Red rooster are sometimes crossed with a Silver Laced Wyandotte hen to produce birds with the same colouring but black tips on the feathers.

Thanks to a phenomena called 'hybrid vigour' this breeding method produces stronger and more robust offspring than pure breeds.