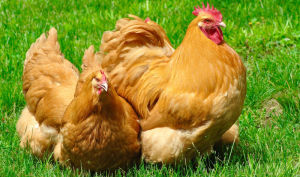 Orpington chickens are big, friendly dual-purpose birds originally developed in the UK. They are cold-hardy due to their fluffy plumage.

The Buff Orpington is the most popular and all varieties, especially the black and blue, are rare. The blue suffers from the usual wastage of the colour.

The Orpington looks huge for a chicken. The fluffy, slightly curled feathers make them look much bigger then they are. The tails appear comparatively short and Orpingtons have a square appearance.

Below: A Buff Orpington, the most common type.

Characteristics of the Orpinton breed:

The Orpington originates from Great Britain in the late 1800’s. A period that ignited an interest in peculiar breeds of chickens. William Cook, a coachman who lived in Orpington, Kent developed the Orpington by crossbreeding a Minorca and a Black Plymouth Rocks and then crossing the offspring with clean-legged Langshans.

William Cook set out to develop a breed of chicken that has a dual-purpose in eggs and table meat. It is important to remember the feathers had considerable value at that time as well.

Below: Some of my white Orpingtons.

A short history of the Orpington breed:

The original Black Orpington was bred by William Cook in 1886 by crossing Minorcas,
Langshans and Plymouth Rocks to create a new hybrid bird.

Cook selected a black bird
that would exhibit well by hiding the dirt and soot of London. When the breed
was shown in Madison Square Gardens in 1895, its popularity soared.

It was bred for superior egg laying and while retaining meat quality. It is said that the original Orpington laid over 300 eggs a year but the selection of the ornamental over the utility has lead to the decline and loss of the brown egg.

Its large size and soft almost fluffy appearance together with its solid colour and gentle contours give it an attractive appearance. It is kept more often as a show bird these days rather than a utility fowl.

Below: My Partridge Orpingtons.

Hens often become broody and are good mothers. Some of mine have raised two or three clutches in a year and can incubate a large clutch because of their size.

Although quite heavy Orpingtons are able to fly small distances but rarely do so. I have never seen mine do anything more than fly to a perch. If the roosts are high they will need a staging post halfway up.

Orpingtons are used for exhibition, ornamental value, meat and eggs.

Docile and calm, a good choice to have around with children. They are also good in gardens where they need to be kept confined. Their reluctance to fly means they tens to stay put inside even small fences.

The Orpington is a very large fowl with soft feathering that masks its true size. The feathering allows the endurance of cold temperatures better than some other breeds.

The Orpington is considered an active fowl and does better free-range rather than confined. Their personality is calm and gentle and their docile disposition can lead to bullying by more aggressive breeds so they may not find a home in a mixed flock.

This fowl has a deep breast with a curved back, short legs with thighs covered by thick feathering. The Orpington has either a single or rose comb (depending on the standards of the country), red wattles and white earlobes. The hen does tend to go broody and is thought to be a good mother. The hen is a reliable sitter.

I have listed all the colours that I know of. Some may not be standardised in some countries.

Orpingtons come in both the large fowl and bantam size.

In the beginning of the twentieth century, Herman Kuhn of Germany developed a Bantam variety.

The Bantam retains the appearance of the full-size bird, but in a smaller size. There
is a large variety of colours in the Bantam version, including black, blue laced, white, buff, red, buff black laced, barred, buff Colombian, and birchen.

The Bantam retains the friendly personality of the Standard breed, and seldom or never flies.

Type - Body deep, broad and cobby with the back nicely curved with a somewhat short, concaved outline.

Wings - Small, nicely formed and carried closely to the body, the ends almost hidden by the saddle hackle.

Tail – Somewhat short, compact, flowing and high, but by not a squirrel tail.

Head - Small and neat, fairly full over the eyes.

Comb - single, small, firmly set on head, evenly serrated and free from side sprigs. narrowing behind to a distinct peak lying well down to the head and not sticking up.