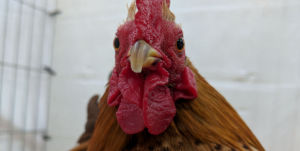 Although rumoured to have been first bred in the Kelatan province of Malaysia in the 1600's, it is widely accepted that the creator of the modern Serama bantam chicken is Wee Yean Een. In 1971 he began a breeding program that would see Ayam Kapans crossed with Japanese bantams and Silkies. He gave his breed of small chickens the name "Serama" in honour of the Thai King Rama.

The Malaysian Serama Bantam is the smallest and lightest bantam chicken in the world taking the position once held by the Dutch bantam.

Whilst the complete ancestry of the Serama is uncertain and there are many claims and myths regarding it's origin. Some theories date as far back to the 1600s and to the Thai King Sri Rama, although there is no documented evidence to prove this.

It is believed the Ayam Serama originated with crossing many old Malaysian Kapans, game birds and wild tree birds. It is thought the history of the creation of Serama comes from the Japanese bantam which was bred with Ayam kapas - a Malaysian version of the Chinese Silkie bantam which has soft woolly feathers like animal fur.

It is also believed that the kapas walik also played a role in the Serama's ancestry, this is an unusual bird that has feathers which curl backwards and are brittle it can also sometimes have a crest on the head and feathers on the feet. These birds have an ugly appearance like curly scales.

Before the Serama was established and pure breeding, there were some birds bred which displayed curly feathers, Silkie feathers, feathery feet and nut heads or rose combs.

The Serama has since been refined in Malaysia with all undesirable attributes removed. Though in USA and Europe there seem to be interest in the birds which still hold the undesirable faults such as Silkie feathers, curly feathers and feathers on the feet.

Below: Ayam Kapas - The breed is rose combed, Silkie feathered, has 5 toes and dark skin. It is believed that from these the Silkie genetics in Serama occur.

Below: An Ayam Walik displaying the curly scale like feathers as described by Lutfihadi Indrawan. This breed has a fine bone structure. These curly feathers are called "bulu terbalik" in Malay.

The Ayam Walik is similar in size and stature to the Old English Game bantam.

The Malaysian Serama Bantam is the smallest and lightest bantam chicken in the world and often described as a living work of art.

The complete ancestry is uncertain and there are many claims and myths regarding the origin of the Serama Bantam. Some claims dating as far back to the 1600s and to the Thai King Sri Rama, although there is no documented evidence to prove this.

Seramas are actually very easy to care for, provided that you have the time, and willingness to do so. If you recognise that the birds health, happiness and well being must be first and foremost, then your enjoyment will come automatically.

The modern day Malaysian Serama Bantam is said to be due to the many years work by Wee Yean Een from Kelantan Malaysia, who had a fascination with chickens since his early childhood days.

Wee Yean Een obtained some Ayam Kapans in 1971 weighing 22 oz/ 650 grams, which were similar in type to the the UK's own Modern Game Bantam. However,these birds did not conform to any written bantam standard.

From the first breeding and to his surprise he only bred normal feathered offspring. As the offspring had the desirable compact bone and body structure of the Silkie Wee decided to continue with his breeding programme and tried to breed out the undesirable traits of the Silkie like the leg feathering and the extra toes.

Despite his attempts he never truly managed to completely breed out these undesirable traits as occasional throwbacks such as Silkie feathering and leg feathering still occurs even to this day.

In the UK breeding of Silkie feathered Serama is encouraged, in the home country of the Serama it is a serious fault and all specimens displaying this are culled.

Also there are programmes in the USA breeding the booted Serama, also deemed undesirable in Malaysia.

In 1985 Wee Yean Een introduced the Japanese Chabo Bantam into his breeding program for their colour and erect tail carriage. His plan was to try to produce a bantam with a large breast and a confident, regal style. The vertical wing carriage that was close to or lightly touching the ground and a compact body were also traits he aimed to reproduce within his project.

The Japanese out-cross was successful so he line bred the offspring to lock in these features. As with all poultry line breeding parent to offspring causes the resulting offspring to be smaller in size so he continued with the breeding program and again aimed to reduce size further.

By 1988, the line offspring were breeding in a recurring similarity and weighing less than 500 grams. Wee Yean Een decided to name the breed Serama after Raja Sri Rama a mythical character from shadow puppet plays, which Wee Yean Een had enjoyed as a child.

Wee Yean Een thought that Raja Sri Rama who is famous for his beauty, majestic and regal bearing an ideal role model for his Seramas.

To popularise the Serama and to help fund his breeding program, Wee Yean Een started selling off excess breeding stock to the public and they became very popular.

In 1990 with sufficient Serama in public circulation, the first ever Serama show was held in the district of Bukit Batu Pahat in the northern Malaysian state of Perlis.

It was held in alongside a state government organised event featuring songbirds.

Below Left: Wee Yean Een Judging Serama in one of he earliest Malaysian Serama Competitions.

Pictured above is believed to be the earliest drawing by Wee Yean Een of a Serama.

This drawing pre-dates 12/2001 and was drawn well before any other standard developed outside Malaysia.

In Malaysia and other eastern countries the popularity of the Malaysian Serama Bantam is mostly due to its physical beauty and the small size making them suitable for keeping even in urban areas.

Breeding still progresses to perfect them even further and improve their small size, temperaments, physical structure and over-all physical beauty.

Above: The Honourable Prime Minister of Malaysia, Datuk Seri Dr Mahathir Mohammad, handling a champion Serama rooster accompanied by Tuan Ghazali Bin Cha (in blue batik behind the rooster) and Wee Yean Een. This photo was front-paged on 23 July 2000 in Mingguan Malaysia, the Sunday edition of Utusan Malaysia, the leading Malay newspaper in Malaysia.

Breeding still progresses to perfect them even further and improve their small size,temperaments, physical structure and over-all physical beauty. The downsizing of the Serama is still ongoing with a few specimens weighing in at 6ozs (185gms) for males and 5ozs (155gms) for hens.