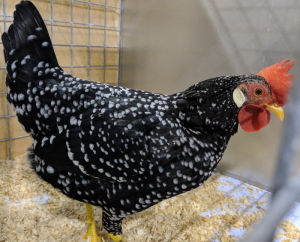 The Ancona chicken is a heritage breed. This lovely chicken originates in the Italian seaport of Ancona on the Adriatic Sea. Exported from Italy and mainly bred in England in the 19th century, the Ancona is now very rare in its homeland.

I have kept a few Ancona large fowl for many years now and they have become an indispensible part of my egg flock.

Conservation status: Ancona chickens are fairly rare. The Ancona has a "Watch" status on the Livestock Conservancy list of heritage poultry. This breed is available at several large hatcheries, but it can be hard to search out a breeder.

Origin: Italy in the Mediterranean.

Temperament: Can be a little wild and restless or flighty. Needs open range and does not like confinement. Mine are noisy and wary of people.

Cold hardy: Mostly. The large comb can be a problem.

Colours: Only one. Mottled, black feathers with white tips and a beetle sheen to the plumage.

Recognised variety: Rose Comb, Single Comb. The comb is single or rose and the wattles are large and pendulous.

Useful to Know: A good winter layer that is an active forager. Like the Leghorn, the large comb can suffer from frostbite.

Ancona have a black background with a beetle green sheen and a white V-shaped tip on 1/2 to 1/3 of the feathers. They have the classic white ear lobe associated with all Mediterranean breeds.

They have yellow skin and shanks, although the shanks may also have black mottling on them. Ancona come in both single comb and rose comb varieties. Some claim their mottled pattern gives them a camouflage advantage again predation.

Below: The mottled feathers from the Ancona.

Ancona Chickens are a light, soft feathered bird. This fowls plumage is generally black with a white V shaped tip to its edge. The black colouring has a ‘beetle green’ sheen iridescence which is most attractive.

The face, wattles and comb are bright red. The ear lobes are white white or creamy. The beak is yellow, with dark shading. The legs are either clear yellow, or yellow mottled with black. The comb on the male is erect, while on the female it tips over to one side.

Below: The Ancona hen.

It is quite a challenge to get the mottling right to win in the show ring as there can be a lot of variation, even within the same bloodline. Birds should be evaluated their first year because the white mottling becomes more pronounced with age. This is true for all mottled varieties of chickens.

Brief history of the Ancona chicken:

England took up the breeding of Ancona in 1848. The breed met the critical demands of the English for a profitable fowl, and became one of the popular and stable breed at the time.

America first imported Anconas in 1890 from England, but at that time poultry matters were slower than at present, and it was several years before they became well known.

Below: Anconas from yesteryear - Winners at Madison square gardens.

They were first thought to be a member of the Leghorn family, particularly from the Mottled Leghorn, but this is now known to be untrue. They are so similar in type, that some refer to Ancona as mottled or black Leghorns.

Like the Leghorn, Ancona are famous for being excellent layers of large, white eggs.

Below: A display of 6 Ancona eggs.

In 1916, H. Cecil Sheppard, the most famous of Ancona breeders, held the world egg laying record with a Ancona hen that laid 306 eggs in 330 days!

They are bold, active bird sand are excellent foragers with a good feed conversion ratio for economical production of eggs.

He also noted from his records that his Ancona hens laid 408 eggs in January from just 25 hens, making them exceptional winter layers.

How many eggs does a Ancona chicken lay?

The Ancona is a true white egg laying machine, results show that for every 100lb of food the Ancona lays 300 eggs, which beat off all the other entrants easily. Also the Anconas eggs were heavier than all the other breeds.

Females are excellent layers and they are a good forager and flyer. They lay white to cream coloured eggs and you can still get white eggs to those with red earlobes. They like foraging away from humans and are very active alert and bold. They will be happy in confinement, but at first they may seem a bit restless. Many of the birds will become whiter and whiter as they become older.

Not as a rule, and they are not unfriendly. I find mine mostly ignore me unless I have food. Hand reared birds might be more friendly but this is not a breed to choose if you are after family pets.

How big is an Ancona chicken?

Ancona are relatively tall with their upright stance and are quite well built and full bodied.

Large fowl males can reach 26 to 30 inches tall and weigh 6 1/2 lbs. The hens are 4 to 6 inches shorter and about two thirds the weight of the males.

Where do Anconas come from?

There is nothing mysterious or even doubtful about the origin of Ancona chickens.

They are native of Italy, and have been bred there for centuries, as they are today. The Ancona is a breed of chicken which originated in the Marche region of Italy, but which was bred to its present type mainly in the United Kingdom in the nineteenth century. It is named after the city of Ancona, the capital of the Marche.

In his book "History of the Anconas" from 1915 the author, R.W. Van Hoesen writes:

"In August, 1910, I wrote to the Consul at Rome, Italy, hoping to secure some information on this subject. The following extract from the reply to my letter shows the status of Ancona fowls in their native country:

"Ancona fowls are a breed of The Marches, a geographical designation embracing the Province and City of Ancona, Italy, and are considered the best in this country, both as producers of eggs and of meat."

Ancona is not far distant from Rome. Italy is boot like in form, and the city of Ancona is on the Eastern coast where the peninsula has the greatest breadth.

Do Anconas need any special care?

From his book on Anconas, R.W. Van Hoesen writes: "In Italy the climate ranges from below zero in the mountain regions to 109 degrees above in the lower part during the hot season, and this great diversity doubtless accounts for the extreme hardiness of Ancona fowls, and their adaptability to the varied climates of America."

Caring for your Ancona chickens is much the same as with any other breed. The comb is large and can get frostbitten easily and they require more space than some breeds.

Anconas can be a little flighty, but mine soon settled down. They do not respond well to being kept in a small run and prefer large areas to roam around in. If left to free range they will discover half of the food they require.

They’re a quick growing breed and don’t require any specialist treatment. Hardy and a great bird that avoids some predators.

How old are Ancona chickens when they start laying eggs?

Anconas begin laying at an early age, pullets reared early in the year often start laying at sixteen weeks of age and lay persistently all year, except during the moult. They will repeat the performance during the second and third years, and even four year old hens lay well. As a consequence it is not necessary to replace your flock with young stock every year or two.

At twenty weeks mine are in full lay, not just an occasional egg but from five to seven full sized eggs every week.

How long do Ancona chickens live?

The Ancona is relatively long lived and as a general rule has good fertility and hatch rates.

Mine always produce good strong chicks that grow fast. Expect good productivity for 5 years and eggs for 7. I have two Ancona hens that are nearly 10 and still going strong.

How much space do Ancona need?

The Ancona is on the large side and they need a lot of room. They prefer high roosts and a large run or to free range.

Mine have never been aggressive but they are quick to defend themselves and don't take kindly to being picked on.

The birds don’t go broody and therefore are classed as non-sitters, so if you want to breed have a natural sitter like a Silkie chicken to raise the young chicks.

Where to get Ancona and how much to pay for them:

There are several hatcheries which keep stock of backyard standard birds. The mottled feathering is difficult to produce accurately and hatchery stock varies wildly in it's quality.

You can find Ancona for sale at:

The cost of Ancona reflects the scarcity of the breed and the limited number available. To buy Ancona expect to pay:

Bantams can be easily twice the price of large fowl.