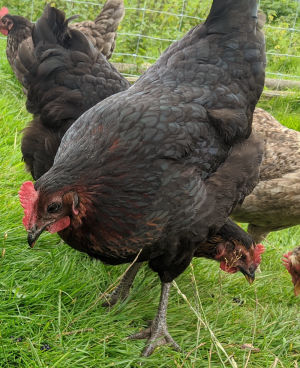 Where do Marans come from?

The Marans chickens comes from the town of Marans, an Atlantic port twelve miles north of La Rochelle, at the mouth of the river Sevre and the canal system that forms the famous Marais Poietvin, more often known as the green Venice.

Fens rich in Gray clay, bathed in hot sunshine during the day but sleeping under a thick blanket of mist at night, surround the town. It's in these immense expanses, often covered with briny water during the winter high tides, that on the raised ground could be found these courageous farmers cultivating their modest lands. Linked to their capital Marans, by the canals where small flat bottomed punts offer the sole means of transport, not only for themselves but also for the many itinerant trades people

Since Roman times, MARANS has been a port specialised in cereals that arrived mainly by river or canal from the surrounding regions. This favoured the development of poultry farming with a local breed of chicken known as the Pictave.

These early attempts at breeding were well supported by the many monasteries in the area and a large population of monks maintaining a constant demand for eggs and chicken. The local farmers were breeding then a small black chicken that was the popular in the Aunis and Vendee fen regions.

In 1152, Henry Plantagenet, Count of Anju, Duke of Normandy and later King of England Henry Henry II, by marrying Eleonora, acquired the Aquitaine part of the southwestern region of France. In the XIIth century, during nearly two centuries of occupation, English conquerors began using the port of MARANS to export cereals, wines from Cognac, and the poultry from Marans; a trade with ENGLAND that thrived, almost uninterrupted, for more than eight centuries.

In order to have fresh meat and eggs constantly available, ships have always carried live chicken on their voyages. The English ships sailing into Marans were not an exception. In return, they took on board new poultry, which provided them with fresh meat and eggs.

However, it was not until 1880 that the Marans started to appreciate a widespread reputation, due largely to the rivalry between two brothers, both poultry merchants in London. One of them was one of the biggest wholesalers of white Russian eggs, then the most important poultry producing country in Europe. His brother, whose ships often docked at Marans, had the idea of competing with the white Russian egg trade by selling the dark brown eggs of Marans, bigger and fresher.

History of the origin of the Marans breed:

The second half of the 19th century was a decisive phase in the formation of French breeds, which was significantly influenced by the influx of Asian breeds. In 1876, Geoffre Saint Hilair and Foucalt imported Langshanks.

Luis Rouillé, a prominent amateur breeder, was fascinated by this Chinese breed, which did not have yellow legs, which were no longer very popular at that time. The remarkable quality of the meat and intensely coloured chocolate eggs left a strong impression.

Luis Rouillé bred many Langgans in the village of Fouras, 20 km south of La Rochelle. His animals got into farms in his nearby region and so began the second phase of breeding Marans. Since then, the main characteristics of this breed - large dark red eggs - have been determined. Unfortunately, this did not apply to all, then quite numerous, colour traits, which were created by the influence of many fighting breeds.

In 1914, these hens were presented for the first time at the national exhibition in La Rochelle, under the name "regional hen".

In 1921, breeder Martha ROUSSEAU-CHARPENTIER presented a number of hens in La Rochelle, an almost balanced frizzy colouring that laid amazingly large eggs. Luckily for the future breed of Marans, Paul Waroquiez's editor-in-chief of the magazine "French Poultry Breeder" visited this exhibition. He was very interested in this unknown breed, which laid such beautiful eggs. He published a number of articles on the subject of this breed, especially the article of July 1, 1929 on the origin of the breed Marans.

In 1929, a department for the breeding of Marans was established at the Association of Poultry Breeders in Auniser and Saintonger. The aim was to protect the advantages of Marans. The Marans breed has since been able to be exhibited at regional exhibitions. Because of this, Paul Watoquiez proposed the establishment of the club. The French Marans Club was founded in September 1929 and Mr. Bouyer became chairman.

In the same year, the Englishman Lord Greenway, enchanted by the exceptional qualities of Marans, bought several animals of various colours at the Paris Exhibition and during the following years focused his breeding intentions only on the cockerels. Due to the instability of this colour character, he divided it into three types: dark-necked, silver-necked and golden-necked. Fifteen years later, he introduced to the world slightly smaller hens, which were to lay up to 200 eggs a year.

In 1930 Marans were exhibited at exhibitions in Lütticher, Paris, Liller, Lyon and others.

From these observations a breeding standard was to emerge, which was to be examined by the committee on the Aulnaie estate at the end of 1930. On April 2, 1931, it was written and published in many breeding magazines, even before the General Assembly, which took place on November 22, 1931, where it officially recognized this standard by entry in the list of recognized breeds of SCAF.

On 22 November, the Marans breeders club amended its statutes so that their efforts to protect and spread the Marans and their red-brown eggs could take effect throughout France.

The second world war nearly put and end to the Marans, as it did with nearly all heritage breeds at the time and by 1946, shortly after the Second World War, the state of the breed was in approximately the same condition as in 1929.

In an effort to improve this situation, in Laborde (a suburb of La Rochelle), they have jointly set up the French Marans Club, the SCAF and the local Breeders' Association. Breeding in this cooperative was based on the fact that chickens were hatched from eggs from control nests, so it was possible to trace the origin of each animal and their genetics could be improved. The cooperative then supplied its members with hatching eggs and chickens and in the first monitored year, the average number of eggs was 168 per laying hen. The plan for 1954 was to breed between 500-1000 laying hens. However, it was not realistic to fulfil it and only half this number were produced.

It went so far that Alex Wiltzer, Chairman of SCAF, in 1963 wrote:

"I am left in a very uncomfortable state, during a visit to breeders of Marans in Belle-Croix I found that in each of the centres, aimed at producing pure breed Marans ,there are a lot of cross-breeds and I did not find a single hen of the Marans breed. "He adds:" But I was pleased and surprised that beautiful black, copper and white animals can be found on the surrounding farms. "

On August 28, 1946, Mr. Deraze was elected chairman of the club. He was succeeded on 30 July by Mr Liet, on 15 July 1965 by Mr Bachelier and on 30 April 1966 by Patrice Bougrain Dubourg. The latter was appointed chairman until 19 January 1991. Madame de Gaulle then had the chickens brought from Marans to Colombey-Ies-Deux-Eglises, the seat of the de Gaulle family.

The club had a board made and placed at the entrances to the city of Marans with the words: "Marans, the capital of hens that lay red eggs." After seven years, however, the board was removed by the local council. Despite all the difficulties that the Marans suffered during the fifties and sixties, scientists and breeders worked to improve the Marans, especially thanks to the chairman of the club, Bachelier. Bachelier led the Maranza breeder, Mr. Priouzeau, to use artificial hatching for 20 years as a breeder and specialist.