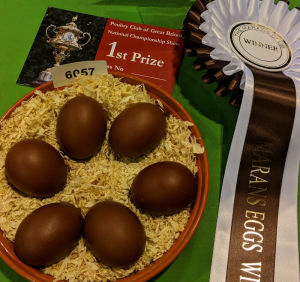 The egg and colour standards are the same for both the bantam and large fowl Marans unless where specifically noted below.

The Marans breed standard serves the ideal. Conservation breeding of the Marans chicken has the goal:

My breeding goal for my flock of Marans chickens was slightly different and is mainly based on the colour of the eggs as I neither show them nor sell them as pure breeds.

Below: One of my 30 or so Copper Black Marans. Mine are kept purely for the dark eggs and not necessarily the proper breed standard.

The following are severe faults in Marans:

Please note that the English selection of Marans without feathered legs is not recognised in Europe and standards differ across the world depending on your country.

The following is a list of the minimum and maximum allowed weights for the different ages and types of Marans:

There are two distinct qualities for the Marans egg, firstly the eggs should be large, ranging in size from about 65 grams for a pullet to 70-80 grams for an adult hen and secondly they should have a deep, chocolate, dark red-brown coloured shell.

Below: A selection of Marans eggs from my copper blacks.

The eggs standards for the Bantam Marans calls for the same dark-brown shell and an egg weight of 40 grams.

The criteria to be evaluated are:

For more on the Marans egg and how to breed for the deep chocolate brown.

Standards for the Marans rooster:

Standards for the Marans hen:

Back almost horizontal. The tail is not too long, set wide and tapering towards the end. Abdomen well developed. Comb straight or inclined to the side, not exceeding the line of the eye.

The white Marans: All plumage should be pure white although some straw colour is tolerated in the hackles of the cockerel. Any other colouring in the feathers is a serious defect.

The black Marans: The feathers must all be completely black and the green sheen is not required. Any buff or white feathering is a serious defect.

The brown-red Marans, also called Black Copper-neck, Copper Black & Red Birchen: The hen is black with red hackle markings and no breast lacing although some chest colour is allowed. Green sheen is not a requirement. The cockerel is black breasted red with a black wing triangle, copper colour in the neck hackles and along the back with deep red shoulders. No brassiness, yellow or mahogany is allowed in the feathers.

The Silver birchen Marans: Similar in all respect to the copper black Marans but silver instead of copper colouring. Must be white with no colour or brassiness in the feathering.

The Silver cuckoo Marans: The hen has dark cuckoo plumage, with a rough pattern and irregular lines, lighter hackles and grey undercolour.

The Golden cuckoo Marans: The same as for the Silver Cuckoo except all silver or white areas are red or gold.

The columbian or ermine Marans: A white bird with black laced hackles, black tail and flight feathers. Under colour is white.

The wheaten Marans: In the male golden to brown-red head, lancets and hackles with red wing covers and a black wing bar . The black primaries are edged with brown and the secondary feathers have internal black edged and external brown edges, which forms a brown wing bay. The upper breast is black and its lowest parts blackish.

In the hen, the head and hackles are golden-red to brown and some black spots are allowed. Back, rump and wing covers are wheaten coloured. The tail feathers and the flights are black, edged with brown. The breast and the abdomen are cream and the under colour is whitish.