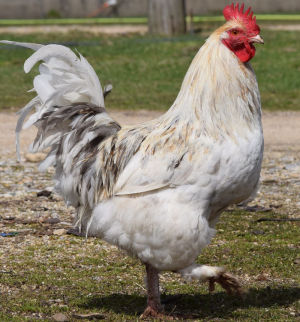 The Marans is a breed of chicken originating in France. It is a medium breed compared to others, popular for poultry shows and is a dual purpose fowl known both for its extremely dark eggs as well as for its very fine meat qualities.

Black Copper (black with copper feathers on the neck) and Cuckoo (barred feathers, giving a black and white speckled appearance) are the most common of these.

The breed as it was when first brought to England was very variable in appearance. The only colours at this time were the white and brassy black. The breed became more of a standard breed than a country fowl due to the vigorous breeding standards of early

British breeders, however this was only started fairly early in the 20th century, To the present day there is still much work to be done as “throw backs” are prevalent in the form of white and black birds being bred from other coloured strains.

The original Marans have feathered legs but this has been bred out by many UK breeders.

Marans are generally quiet and docile; but they are quite active, taking well to free ranging in rough terrain and are also tough and disease-resistant. They were originally bred in the marshy areas of France and can cope with damper conditions.

Marans lay around 160 dark brown eggs each year. Marans are an historically dual-purpose bird, prised not only for their dark eggs but for their table qualities as well.

Marans were approved and accepted into the American Poultry Association in the Continental Class in April 2011. They were developed in France and are known for their famous, chocolate brown egg. The English standard calls for clean legs, the French standard calls for feathered legs.

The Black Copper variety is the most common variety in France and is generally believed to have the darkest egg colour of all the varieties.

Marans varieties not yet approved:

The Black Tailed Buff Marans has uniform buff plumage, ranging from a light shade to a deep reddish shade. Tail is primarily black, but feathers may have brown edging.

One of the difficulties faced by breeders of the Black Copper Marans in the US is the lack of genetic diversity. Much of the breeding stock left in this country 10 years ago was of the English variety; with smooth, unfeathered legs. The French standard calls for lightly feathered legs. There are only a few breeders that have been able to produce Marans stock that comes close to the French standard.

Rooster should have black feathering with the neck and saddle copper coloured with a black body. The undercoat is grey. Back and wing cover copper coloured. The wings are black. Breast black, slightly translucent copper colour allowed. Gold orange head. Neck brace gold-orange, turning orange-yellow at the bottom, each pen with a light brown body pattern, in the lower part a slight, hidden matt black is permissible.

The inner side of the shoulder squadrons is black, the outer light brown so that the wing triangle is light brown when the wing is folded. Large black rafters with a green sheen. Breasts, abdomen and thighs black. Rudder pens black. Main blackbirds with green gloss. Side skirts black with brown trim.

One of the oldest types in the standard and seemingly almost extinct. The black Marans has completely black feathers and under fluff all over with no other colours allowed.

There is no requirement for the beetle green sheen on the feathers.

Pure white colour. A slight hint of yellow at the cock allowed in the neck sling, saddle and shoulders. strong hint of yellow, otherwise coloured feathers. Sporadically appearing yellow colouration to the legs and beak rather than the preferred white is also a problem found in the breed. All have red or orange eyes and white feet. They are in the medium weight class, generally rather smaller than the more common Rhode Island Red.

Clearly visible body drawing and too pale colour in the neck brace, too light or dark wheaten colour, too light edging in the cover feathers. Feather wraps for both sexes.

When breeding these birds, you do not have to worry about producing chicks of different colour varieties. This line has been kept pure and still lays as an egg averaging about a 7 on the French Marans Egg Chart.

The Wheaten Males have the stunning golden cape. With his wings folded to the side, a distinctive gold v-shaped pattern will appear.

Wheaten Marans have pearl legs and beaks. The hens have a dark mahogany cape with light wheat fawn under fluff. The Wheaten gene will produce various shades ranging from dark to light gold in the female birds. It is our goal to breed these birds to the consistent colour pattern we just described. These birds are docile and excellent consistent layers of nice dark eggs.

With the hen the head is coloured gold. Neck brace golden brown with gold edging; in the lower part, a slight, hidden matt black is permissible. Cover the body of the field options evenly wheaten, breasts, thighs and abdomen a slightly lighter shade of wheat.

Basic colour and drawing the same as black copper. The colour of the drawing is silver white instead of copper.

This Blue Copper variety is a striking colour combination with all the traits Black Copper Marans are famous for. Because the blue colour gene is a variant of the black colour gene, the two varieties can be run together.

Base colour pure uniform grey blue. Head and neck brace copper-colored with a dark blue body drawing. Back and wing cover copper coloured. The remaining feathers are gray-blue with more or less dark blue edging, a little darker on the tail. Slightly permeable copper colour on the chest allowed.

Hen has a copper coloured neck with a dark blue body. The remaining feathers are gray-blue with more or less dark blue edging, a little darker on the tail. Slightly permeable copper colour on the chest allowed.

I much prefer the clean legged English Marans, both for looks, for keeping the eggs and nesting boxes clean, and their resistance to scaly leg (I have never ever had this in my fowl) English Cuckoo Marans look more attractive should you intend to rear any spare Maran cockerels for meat - and they were originally a dual purpose utility bird. Marans were valued for the excellent quality and fine flavour as gourmet table birds, as well as for their wonderful eggs, something which seems to have been overlooked recently.

My Maran flock is a fine healthy long-lived strain, and they are normally allowed complete free range over several acres of orchard and pasture. My Marans are fed as much as possible on wheat and other whole grains and natural food, and the land they are on is never sprayed or artificially fertilised. They have natural dried and ground seaweed meal and oyster-shell grit ad lib as a supplement.

I have always selected Marans which have a calm, quiet temperament and I have never had any trouble with aggression from the Maran cockerels. As these birds are from a large strain they are easily kept penned in (or out) of parts of the garden, as they are too heavy to fly. Marans also seem to be less inclined to scratch and peck the garden than some of the lighter and smaller breeds.

I have tried to concentrate on quality rather than quantity and so I do not have a large number of Marran eggs for sale so please contact me for availability. I only ever hatch from dark coloured, well shaped eggs which come from Marans that are good egg producers. So the genes for the really dark eggs are being concentrated, whilst the egg laying abilities are not being lost.