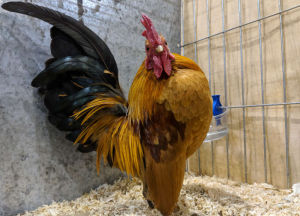 What am I looking for in Serama bantams?

I get emails from a lot of people that are having some trouble planning their serama flocks. Not only beginners, but even those who are into their 5th generation are saying they still don’t know what they are looking for.

Below: It is hard to know what to look for in Serama bantams.

Why is it so difficult to find quality Serama?

This lack of a good start is coming from the fact that this is a new and highly variable breed. Type is not set. Near perfect birds for use in line breeding efforts don't exist. If you can’t find excellent birds to base a flock on, what do you do? You make them.

Below: Quality Serama bantam chickens are hard to come by.

The real truth behind so many bad birds is money. Breeders sell all their substandard birds rather than culling them from the breeding flock. Some are cashing in on the demand for the Serama bantam by producing as many as they can and selling eggs or young stock before they know if they are good stock or not.

I started with an observational flock. I simply found I had birds with the different individual traits, such is the nature of the Serama breed as it currently stands.

I am looking to find birds that carried some “smallness” and attitude.

I looked for small hens that laid largish eggs for their size. Any trait I wanted in my final bird (years from now) I looked for them in these offspring. Identifying these birds is key to moving forward with a breed as unrefined as the Serama.

Where am I now? Still observing. However, some birds have proven to carry and pass on some of these features. They have gone from the “observation” flock and have become my breeder birds for improvement. I have brought in additional birds to my “observation” flock to try to pick up some missing pieces. It is very slow going and the steps are small. Don’t be frustrated and if you aren't finding all the traits you want, bring in more birds.

Why am I getting so many poor quality Serama?

I watch the auctions a lot, and I am often discouraged by the quality of the Serama sold. I am not the only one to notice, but not everyone seems to. These poor birds often sell for good money when they were really meant for the cull pen.

Why is this happening? I see three main reasons. The first is money. People want it and will sell poor, misrepresented birds to get it.

The second reason is people are inexperienced at putting together flocks of young breeds. People are going “hen heavy”, producing numbers to sort through (or just sell). In reality, picking hens this early is a shot in the dark. Why? Because the Serama breeding at this point is more influenced by the rooster.

We know what we want in a cock bird, it is defined in the USSC standard. Unfortunately, the hen type will less based on its merits alone, but more so on the roosters she produces. This can be hard to visualise. We have to learn what a hen that produces the correct type in roosters looks like, and adapt the female standard to that early on.

No one knows yet what this hen looks like. Some have defined a hen “standard”, but it too is a shot in the dark. What’s the solution? Your flock should be hen and rooster matched.

Find the best roosters you can, get many of them, and rotate them through your hens. Keep good records, find out which ones produce good numbers of excellent male offspring. The sisters to the good offspring are the hens you want to keep. In effect, they are proven by their brothers.

The last reason for such poor birds is poor selection of a breeders to buy from. I have noticed some of the biggest sellers have the least knowledge of the genetics and breeding methods to produce quality birds. I have seen such large “breeders” not be able to describe the action of a simple recessive gene, why would you expect them to sell you the best birds available?

Another big seller buys out other failed breeders and resells their stock for profit. You will be the third or fourth person with these birds that no one else was able to do anything with. What are your chances of success? I also get many emails from egg buyers asking to get eggs from me after being disappointed with birds from another egg source that grew to 900 grams.

You see many eBay / Eggbid sellers advertising “A and B Parents”. However, in the virtual shows and at the Ohio Nationals, no A birds were shown. Why? Because, in reality, not many exist! Simply put, most of these sellers are probably lying. Check their feedback from last hatching season and contact some buyers. See what the birds turned out like. To put it in perspective, I have a handful of A birds. To get them, it took 2 generations and over 700 birds raised! Ask anyone trying to buy an A rooster how hard it is to find one, and you’ll see how rare they are.

How do you combat these issues? First, read the USSC standard and learn what the roosters should look like. Study them, compare photos to the standard diagram.

Locate a good, skilled, and honest breeder. You can find them by reading the message board. If a big breeder seems confused over simple breeding strategies (such as breeding out throw-back traits), he is probably just a “seller”. Skip his birds. Also, ask them questions about their methods. Then check references to see if the answer was correct or bull. If bull, pass again.

Get pictures and ask for information  about the parents. If they can provide neither, it is best for you to walk away from them. And last, unless the birds are over 7 months old minimum, don’t spend the cash unless they are nearly a giveaway. Most will cull out, not become valued breeders.

If you are planning a new Serama flock, or rebuilding a disappointing one, these tips should help. Remember, not only will a good, proven breeder of Serama sell you a better bird now, they will be a great asset to share things with, and ask questions of, later.

One of the things interesting about Seramas is the veil of mystery about their creation. A true record of their start is not available and I have seen and heard several versions.

One particular breed mentioned is the Silkie bantam. It is said someone used them to obtain certain traits, hence the appearance of Silkie feathered Seramas and those with feathered legs. However, I still have some doubt this was actually the course of their development.

While the Slkie bantam could have been used in the Serama development, I find it to be less likely than other explanations.

I will say that getting a specific trait from the Silkie bantam into the Serama would come with a lot of “baggage”. There would be of course leg feathering and Silkie feathering to remove ( This is seen in some Serama, perhaps why this rumour began), and there would be several other traits to remove.

These include walnut comb, five toes, black skin, etc. While it could be done, it would have been done in a relatively short time, as the Serama is a young breed.

This would entail huge numbers of cull birds displaying these bad traits. However, it seems no one saw these culls, as the “silkie bantam theory” seems to be rumour, not a hard fact. The “evidence” of these cull birds seems to be lacking.

So where did the “Silkie” traits come from? Silkie chabo have been mentioned (along with frizzle chabo to explain the frizzling seen in some Serama), but I again doubt they were used directly.

One bird that shows up in most Serama history notes is what they refer to as the common Malaysian village bantam. They are basically like our “barnyard mutt chickens” the Malaysians have running around for food and eggs. I find it a much simpler explanation that these free-range chickens crossed with these other breeds first, picking up these traits in their make-up. Later, when these village bantams were used in the Serama, they carried these traits with them.

While breeds like the Silkie bantam may have gotten their traits into the Serama, I just believe it was done in this manner, inadvertently, not purposefully.