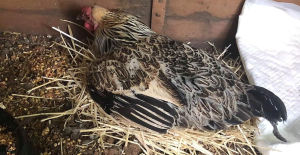 What is Mareks disease?

Below: Leg paralysis caused by Marek's disease. Birds often drop their wind to stabilise themselves or sit back.

It is characterised by marked enlargement of the nerves, liver, spleen, and kidneys due to diffuse growth of certain cells. Birds exhibit classic symptoms including paralysis, cloudy eyes, dropped wings and death.

Although Marek's disease has been effectively controlled by vaccine, sporadic and sometimes serious losses still continue to occur from it. The disease therefore needs adequate attention.

Marek's disease appears almost exclusively confined to female birds. The author has observed that the disease usually begins in growers when they approach sexual maturity, that is, between 17-20 weeks of age. The disease may then continue to inflict mortality even up to 40 weeks (a grower-to-layer disease).

Chickens are the most important natural host and Marek’s is very rare and probably of no real importance in other species except for quail. Chickens of 12-24 weeks of age are most susceptible to Marek’s disease and generally, it rarely occurs in chickens below 6 weeks of age or above 35 weeks of age except in backyard flocks where it may be endemic.

What is the cause of Marek's disease?

Marek’s disease is a lymphoproliferative, highly contagious disease of poultry caused by a high cell-associated galled herpes virus, a DNA virus belonging to the Herpesvirus family.

There are three serotypes of the virus recognised. The virus remains stable for about 24 hours at 30°C. The Marek’s disease virus has been propagated and assayed in newly hatched chicks, tissue cultures ( co-cultivation of lymphocytes with chicken kidney cells or duck embryo fibroblast), and embryonated eggs.

How common is Mareks disease?

Very common. Mareks is found on every continent where there are chickens.

How does Marek's disease spread?

This disease exists in poultry producing countries throughout the world. The mode of transmission of this disease is through the inhalation of infected material from the environment.

The virus particles can persist for a considerable period in the dandruff of feather follicles, which are released in the environment. The infected materials are oral, nasal, tracheal secretions, and litter materials. The darkling beetle (Alphitribus diaperinus) is acting as a mechanical transmitter of the disease.

This disease can be spread through the following ways:

A brief history of Marek's disease:

The seminal report by Józef Marek, distributed in 1907, of paresis in 4 chickens is the first account of the disease named after him, Afterwards, outbreaks were accounted for as early as 1914 in the USA, and in this way in many different nations. Pappenheimer et al. (439) explained the lymphoproliferative idea of the injuries in fringe nerves and spinal ganglia and described lymphoid neoplasms in the ovary and other visceral organs as a major aspect of the infection.

A definite history of MD examination can be found in the twelfth release of Infections of Poultry, a paper by Biggs, the tape "Inheritance of the 1960s," and the chronicled files of the American Relationship of Avian Pathologists. A long view on the most recent 40 years of Marek's sickness research has as of late been distributed as a major aspect of the 40th anniversary of Avian Pathology.

What age do chickens get Marek's?

Chickens get between the age of 3 and 35 weeks as a rule. It can be later in backyard flocks.

Most chickens become infected with Marek’s disease virus during the first few weeks of life than carry the infection throughout their lives, often without developing the overt disease.

How contagious is Mareks?

Marek's disease is highly contagious and the virus spreads rapidly from infected to uninfected birds.

Inhalation through the respiratory tract is the most important route of infection.

The virus survives for months and possibly years under the right conditions outside the birds. This makes it very difficult to eradicate

What are the symptoms of Marek's disease?

Below: Wing paralysis may involve one or both wings to variable degrees.

The outcome is fatal with chickens usually dying from starvation, as they are unable to acquire water and food. A chicken with Marek’s often ‘wastes away’ very quickly.

How to know if your chickens have Marek's. Clinical sign and symptoms vary a little depending on the form of the virus.

The incubation period ranges from 3 weeks to 9 weeks. The disease appeared in several forms:

The acute or visceral form:

The transitional and paralytic form:

Skin and a cutaneous form:

What is the mortality rate of Marek's disease?

Highly pathogenic Viral Marek's Disease strains are liable for acute outbreaks of mortality which may achieve 50% or 60% in exposed, non-vaccinated flocks. Generally, erosive losses of up to 20% happen in non-secured or poorly immunised flocks. Losses of around 1% can be expected in vaccinated flocks.

Marek's disease virus is an immunosuppressive and infected broiler and pullet substitution flocks are vulnerable to a wide range of viral and bacterial diseases. Uncovered broiler shows expanded mortality and condemnation rates at processing.

With Mareks as many as 6 in every 10 birds will die and many others will get secondary infections or become unthrifty as a result.

How is Marek's disease diagnosed?

Diagnosis is based on the characteristic postmortem findings. That is, from the markedly enlarged liver and spleen, and the presence of tumours in various other internal organs.

Specimens to be collected include: Skin, dander, feather tips of infected chicken, blood.

Based on the clinical sign and postmortem lesion or Serological Test.

Are some chicken breeds more susceptible to Marek's disease?

Some strains and breeds have a genetic resistance to Marek's.

How is Marek's disease treated in chickens?

There is no satisfactory treatment of Marek’s disease virus. If you notice signs of the disease, see a veterinarian for the confirmation as sometimes paralysis also occurs due to injury. If the disease is confirmed than isolate the healthy chickens and cull the diseased birds.

Can chickens recover from Marek's disease?

No, there is no treatment for Marek's disease, only prevention. Once a bird has been infected, even if it overcomes the initial infection it goes on to shed virus laden dander everywhere it goes for the rest of it's life.

Below: There is no treatment, only prevention.

Once the virus is introduced into the shed it can be spread very quickly from infected chicken to healthy chicken and infected chicken shed virus continuously. It is difficult to recover once the bird affected by Marek’s disease. In layers it affects oviduct by causing tumours to ovary and depresses laying and hatch-ability.

Can humans get Marek's disease from chickens?

Humans can not catch Marek’s from chickens or poultry. Although it is caused by one of three types of herpes viruses, which are same family that causes chicken pox, cold sores and the STD in people, you cannot catch it from your chickens.

There is no zoonotic importance of Marek’s disease. It means this disease not transferred to humans and other mammals. Meat and egg from the infected chicken are not affected by the disease and safe to eat for humans. However, if a chicken is infected with the cutaneous form of Marek’s disease, it may have skin or internal tumours that can be unsightly.

How do you prevent Marek's disease in chickens?

You get rid of Marek's disease by a combined approach. Prevention and control includes Vaccination, Biosecurity, and genetic resistance.

Biosecurity
• It is basic to put day-old chicks in houses which have been completely disinfected, well ventilated to permit vaccinated flocks to create resistance.
• All-in-all-out system lesser the chances of the disease.
• Properly hygiene the shed before introducing a new flock.

Are there different types or Mareks disease?

Yes, there are different strains of the virus that is responsible for Marek's disease. They range from asymptomatic types which produce no observable effects in the flock to those strains which may be fatal to 60% of birds.

How long will a chicken live with Marek's?

Marek's disease progresses fast after the onset of symptoms. A chickens will generally either die within 24 to 72 hours or recover to some extent.

Marek's Disease can cause more signs similar to other diseases as it weakens the bird's immunity putting it more at risk of other infections.

The incubation period of Marek's varies considerable between 14 days and 12 weeks.

Yes, neurologic signs in Marek's disease may include torticollis, a condition in which the head becomes persistently turned to one side or twisted back over the body, is often associated with painful muscle spasms.

Paralysis in the legs, wings and neck are painful conditions.

Weight loss, collapsed crop and the inability to feed and drink are distressing for chickens.

How do you vaccinate for Marek's disease?

Marek’s vaccine should only be given to healthy one-day-old baby chicks and you may need to have it done by a vet or qualified practitioner.

The vaccine itself comes as a small pellet or wafer in a glass vial that you add a dilutant to. Once dissolved you use a needle and syringe to extract the vaccine and add it to the bottle of dilutant. That makes up 1000 doses.

This vaccination is 0.2ml, subcutaneous, That means under the skin. You do not want to put the vaccine into the muscles or veins of the chick. You also have only 120 minutes to use the contents or it becomes useless.

Is the Mareks Vaccine contagious?

If the Marek's vaccine is a live vaccine and it does make your bird a carrier of that strain which can infect other birds. This is not a problem as all it does in confer immunity to the other birds with a strain of the virus that has no detrimental effects to the chickens.

Should I vaccinate my chickens for Marek's disease?

Yes, Vaccinating your chicks will help eradicate this horrible disease. My avian vet say he sees Marek's all the time in small flocks and he highly recommends that you get chicks that have been vaccinated.

Can I vaccinate older chickens for Marek's?

You can vaccinate older birds, but the vaccination will have no effect if they've been exposed at all to the actual virus. If your chickens have reached 35 weeks of age then vaccinating is probably pointless.