What's going on behind the shell during the 21 days of incubation?

The egg is a unique method of reproduction, it provides all the nutrients and protects the embryo to allow it to develop. It is also a self contained study package being easy to get hold of and reliable in producing results.

Below: Video of an chicken embryo moving around inside the shell.

The ovum from the hen and the semen from the males are produced by a cell division process called Meiosis where each end up with half of the chromosomes needed to produce and offspring.

Below: Successful incubation starts with clean eggs from suitable parents.

During incubation, the embryo develops in a predictable manner with specific events occurring at specific times.

The yolk sac is a membrane that spreads over the yolk and transports food from the yolk to the embryo. The amnion is a fluid-filled sac that covers the embryo and protects it from physical shocks and injury.

The egg membranes have four functions:

The development of an embryo is a fragile process that is easy to disturb.

A list of common incubation problems and their causes is below - link - You can prevent many of these problems by maintaining proper temperature, humidity, ventilation, and by regular egg turning.

It is very important to remember that an embryo inside a shell may look quite different to what you see here. Bantams develop a little quicker and your eggs may look a day or two either side of what I describe.

Why have I included day zero? Well 4.5 % of the development of the embryo in a chicken happens before it is even laid.

After fertilisation, the embryo begins to grow by cell division (Mitosis) . By the time the egg is laid, the initial single cell has developed into 4,000 to 6,000 cells and looks like a small doughnut.

Once laid the embryo will remain at rest for a viable period, up to 14 days in chickens. Physiological zero is 68°F/20°C. Below this all development ceases. The ideal incubation temperature of the chicken is 99°F-100°F (37°C-38°C).

Under the right condition you can see the development of the embryo 24 hours after setting. It is a large circle with a dot in the middle and is more of a shadow than real definition. It is a larger version of what you see on an incubated egg.

Below: Day 1 and you can just begin to see development starting with a red dot and a few short spidery blood vessels.

An infertile germinal disc appears as an undefined mass. The alimentary tract appears after eighteen hours and the central brain crease an hour or two later.The head, brain and nervous system as well as the vertebral column appear before 24 hours is up. Blood islands appear and the beginning of formation of eyes.

By day 2 there is blood visible in tiny vessels and it is beginning to look like a spider. The limb buds are beginning to form.

Below: Day 2 of incubation and the ring clearly defined and blood beginning to show.

Great care should be taken if candling early, the embryo is easily damaged.

The yolk begin to spread out and the membranes stretch out. The yolk begins to look like a half empty sack. this has the advantage of increasing its surface area. The heartbeat is visible. Vascular system well developed.

Below: Day 3 and development is clear to see, the blood vessels are longer and thicker. 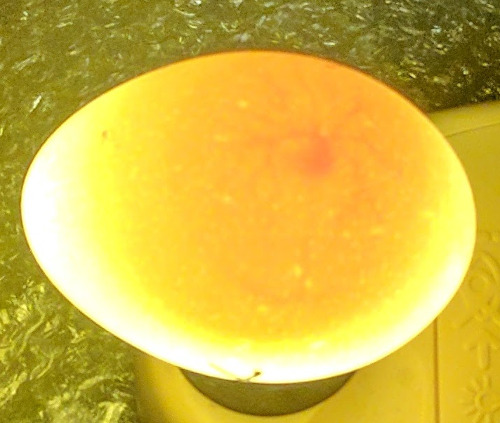 Left side of embryo on yolk. Wings and allantois form. Amnion surrounds embryo and leg and wing buds begin as swellings.

Movement can be seen from day 4 with the right shell and a bright enough light. The embryo itself is about the size of half a peanut. The limb buds have formed and the eyes are becoming pigmented. Increase in size of brain and heart. Limb buds approximately as long as they are wide. Legs longer.

Below: At day 4 you can just begin to see a black spot appear as the embryo grows in size.

On thing static pictures do not show is how much movement happens within the egg. And how important turning the eggs is to keep the membranes from sticking.

The beak is becoming visible and the embryo almost looks like a small chick. The limbs are now identifiable and the black dot is the eye. limb buds longer than wide. Allantois breaks through amnion.

Below: Day 5 in the incubator and blood vessels have spread over most of the membrane surfaces.

The black spot is a little bigger and the air space begins to get noticeably bigger.

Below: Day 6 and the eye dot is more defined.

The surface area of the yolk sac has increased to its fullest extent. Most nutrients are absorbed from the albumen but also from the yolk and shell. Gaseous exchange requires a large surface area. The comb begins to show.

Below: A chickens egg at day 7 of incubation.

You can see the yolk shadow swirling around inside the shell.

As the chick grows the veins become a bit washed out. and the shadows begin to get larger. The feather follicles show and down pins are visible. Feet and wings well developed, down formations starts, nictitating membrane starting to cover eye.

Below: You might not notice much change for a few days.

Below: Day 9 of incubation and the embryo is clearly visible.

As we approach half way point in the incubation cycle, the beak begins to harden. Comb appears as a prominent ridge.

Below: Day 10 and regular movement can be seen.

Below: Day 11 and the body begins to catch up with the out-sized head.

Below: The Embryo is becoming quite large.

Eyelids and eyes have formed including the nictitating membrane or third eyelid. Embryo turns toward the blunt end of the egg.

Below: Day 14 and the embryo is beginning to fill the space. you can also

see the air sac getting bigger.

By day 15 of incubation the development is more or less complete. the yolk almost surrounds the chick completely. The down is complete and the extremities formed . Small intestines taken into the abdomen. Embryo increases in size.

Below: the shadow almost fills the egg now and the large air space is clearly visible.

As the chick grows the yolk absorbs into the chick in preparation for hatching. The chick puts on about 2 grams a day in weight at this stage.

Below: The chick begins to move itself into the final hatching position and the blood vessels are not noticeable anymore.

There is only a little free space left in the egg, as seen near the air space. The embryo rotates to final hatching position with the head under the right wing pointing toward the air cell. Amniotic fluid absorbed.

By day 18, the embryo has developed into a chick and will take up most of the space in the egg. The chick is preparing to hatch and will have pipped internally into the air space that has been developing in the round end of the egg.

Below: A drawing of the chick at day 18. I have switched to drawings so as not to disturb the last 3 days of incubation.

Stop egg-turning at day 18 with the larger end of the egg facing up or the egg laying flat as it would do in the nest. At this point, the chick will position itself for hatching inside the egg.

Absorption of allantoic fluid completed, yolk sac about half enclosed by body.

Below: Day 19 and the chick has moved into position.

The yolk finished absorption into the chick. This is what makes it possible for hatchlings to be able to survive without food or water for several days.

Below: Egg pips externally as the chick pushes through the shell from the inside with the egg tooth on the end of its beak.

The egg tooth on the beak is poised to start pushing through the shell and, apart from the air cell, the embryo is completely filling the egg. The shape of the egg makes it strong from the outside but easy to get out of.

The egg tooth starts to penetrate the membrane, the lungs are working and breathe in that all-important air from the air cell.

It's at this point that you may start to see a hole in the shell as the chick begins to break through with its egg tooth - which will fall of a couple of days after hatching.

This is for the most part is hatch day and you should be going from pip to chick. If you have got your temperatures and timing correct the bulk of the chicks should hatch within the next 24 hours.

Below: Hatching. Day 21 and the incubation cycle is complete.

Some chicks hold on and don't hatch exactly on time and seem to spend ages wiggling their beak in the pip hole. Do not worry about this and best not to interfere and try to open the shell. Doing so before the yolk is completely absorbed will kill the embryo and result in a guilty mess in the incubator.

The blood from the vessels inside the eggshell withdraws into the chick and the final hatch begins when this is complete.

If all is going to plan, the chick now begins to breakthrough. It uses its wing as a guide and its legs to push it and works in a circular pattern to create a hole. This process is called unzipping and results in the eggs splitting into two.

It's a tiring process and there will be a lot of rest periods before it finally hatches. The average length of time between pipping and chick hatching is between twelve and eighteen hours - in some cases longer. It needs to spend a lot of time catching its breath and working its little lungs to build its strength.

How much does the chicken embryo weigh during incubation?

The developing chick gains weigh while consuming the nutrients from the egg contents. The actual weight will depend on the breed, the humidity and the size of the parents.

A table showing the average length and weight of a developing embryo inside the egg during incubation:

Growth is much faster in the middle of the cycle.

Weighing embryos can tell you when it died during the incubation process.