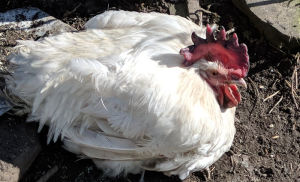 When a chicken suddenly dies it can be distressing for the keeper. Losing chickens is a fact of poultry keeping and my mentor used to say "you cant have livestock without having dead-stock!"

I recently had a chicken die during a dust-bath on a warm sunny afternoon, one minute is was happily throwing dust over its back and the next it was laid out on its side twitching and kicking. I have been keeping chickens for a few decades now and have found birds dead on the floor under the perch in the morning.

A chicken that dies suddenly will just collapse on to the ground and convulse or flap it wings and kick its legs out for a few seconds.

Chickens do occasionally just drop dead with very little or no warning at all. The saying "falling of the perch" comes from chicken keeping after all and means to die suddenly. Commercial chicken producers reckon on a 2.4% mortality rate per year.

Sudden death in chickens is a well known and studied syndrome with broilers or meat chickens but it does occur in laying hens as well. The chickens die quickly of a heart attack or heart failure, often in 30 seconds or less, with wing beating, kicking and convulsions.

There are other reasons that chickens die suddenly.

Do chickens feel pain when they die?

Chickens have a fully developed nervous system and can feel pain when they die. Strokes and heart attacks can be painful events and a chicken will feel the same as any other creature would.

Injuries are often painful, but as chickens are prey animals they are very good at hiding problems until it is too late.

Why are my chickens dying suddenly?

Sudden death is more common among hybrids and growing and younger chickens.

Broilers or meat birds have a much higher mortality rate as their systems can't keep up with the growth rate of modern meat chickens.

Heart attacks and strokes are vascular problems caused when a blood clot gets stuck in a small blood vessel and cuts of the blood supply to either parts of the heart or brain. The result is usually a quick death.

Below: A modern hybrid that died suddenly.

Predators can cause sudden death, not only for the obvious reasons but they can also kill a bird several hours later even if it has escaped from the initial attack.

Poison often works quietly in the background before the visible effects start to show themselves. If a chicken ingests rat poison for example it may appear to be fine for a day or two but it will be bleeding internally and then will suddenly die.

Shock can cause the heart to race which can lead to heart failure. Shock is often a result of conditions like egg binding. An Egg bound chicken will look quite healthy for a few hours until the condition becomes too serious and the chickens will succumb quickly after that.

Smothering happens when chickens are overcrowded or pile into corners and in these conditions they can die in as little as 30 seconds.

Fighting, especially amongst males, can lead to injuries or infections that might not be immediately apparent but can show up later or kill them overnight.

Accidents like a hard landing coming down off the perch in the morning can have similar effects.

Sudden death syndrome is most common in meat chickens and happens because the birds vascular and respiratory systems cannot keep up with the growth rate of the bird. A chicken that dies from SDS of sudden death syndrome will normally be found lying on its back. SDS effects between 1.41 and 2.46 % of meat chickens, which as they are only alive for 6 to 9 weeks is quite a substantial figure.

Do chickens grieve when flock-mates die?

Chickens do not grieve the loss of their flock-mates. When I found one dead on the floor of the coop last year all the other chickens were just wandering about ignoring it and none of the other chickens in that group never showed any grief at the loss.

The only exception to this rule is that if you only have three or fewer birds then they will feel lonely as they are social creatures that need company.

This article part 2 of a four part series:

Some ways to help prevent Sudden death in chickens: