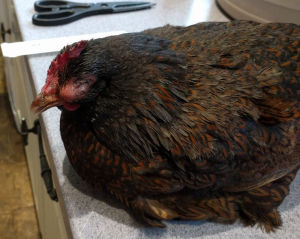 Over the years I have been keeping chickens I have seen many of the die. Sometimes it happens very suddenly, sometimes they die overnight and you find them on the coop floor in the morning and sometimes they fade away over the course of a few days.

Chickens that are about to die begin to behave in distinct ways. They often isolate themselves from the flock or refuse to come out of the coop and will stand around in an unusual manner. Dying hens will usually have soiled vent feathers and most chickens will stop eating and drinking as they die.

The signs or symptoms of a dying chickens are:

Below: You can tell if a chicken is dying. In this not very nice example below the bird is unable to move properly and is covered in dirt.

When chickens are in this sort of condition you should consider having the put to sleep or Euthanised at the vets.

What do chickens do when they are about to die?

Chickens behave in one of three ways when they are about to die.

Do chickens know when they are going to die?

Chickens do seem to know when they are about to die. They take themselves away from the rest of the flock and often hide away in bushes or undergrowth.

This is why you sometimes find a chicken tucked away in a corner of their run rather than back in the coop at night.

What do you feed a dying chicken?

A dying chicken will probably refuse all food but must still be given water and if it does not choose to drink you can assist with a dropper to give a few drops of warm water at a time.

You should never force a sick or dying chicken to eat as you may choke the bird by accident.

How long does it take for a chicken to die?

It normally takes 24 to 48 hours for a chicken to die. It can happen more quickly or drag on longer depending on the reason the chicken is dying.

Chickens which die suddenly at night seem to do so in a few minutes while they are sleeping with little suffering.

What do chickens usually die from?

The most common way chickens die is:

This article part 1 of a four part series: