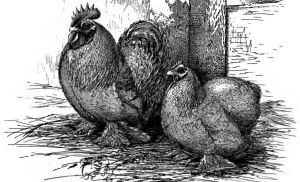 Where did Pekin chickens come from?

The Pekin, or what was formerly called the Cochin China Bantam, owing to the variety having originated from China. Pekin chicken is a bantam breed which originated from Peking (now known as Beijing) in China.

They are smaller in size and are true bantams. They have no large counterpart.

Below: The modern Pekin hen looks very similar to the first Chinese imports.

When did Pekins arrive?

The Pekin was originally known as the Cochin China Bantam. They came from Pekin, China, to England in 1860 towards the end of the Second Opium War.

The first that came were Buffs. For many years no other colour was known.

The original progenitors of this remarkable breed of Bantams were stolen from the Summer Palace at Pekin, during the Chinese war. They were first exhibited in 1863. In appearance they are diminutive Buff Cochins, possessing the solid figures, the buff plumage, the heavy leg-feathering, the dome-like saddle, of their larger prototypes.

The  Pekin Bantam is evidently of very ancient origin, and to the Chinese belongs the credit of their production, and cultivation, probably for many ages.

There is no Evidence to suggest that Queen Victoria was presented with or kept Pekin bantams although it is often quoted as such and she was an accomplished chicken breeder in her own right so it may be true. There is also no evidence to suggest they arrived in the UK before 1860.

It was in the year 1860 that the Emperor of China's Summer Palace in Peking, or Pekin, was captured by the allied British and French arms, and among the spoil then captured were some beautiful Buff Cochin Bantams, which were prized and cared for by a " British Fancier," who was an officer then faithfully serving his Queen and country in China.

This officer sent them home to a friend, who bred a few, and then let Mr. Kerrick, a gentleman residing near Dorking, have them. These birds were bred in-and-in for nearly twenty years, and for a dozen of which they seemed to show no marked ill effects from the mode of in-breeding. Gradually, however, the constitution became weakened, and sterility ensued.

Their first introduction into England was not until the year 1860, and previous to that, I believe no fancier in this country had ever heard of them. These were all Buffs — ^the cocks were rather a rich darkish cinnamon, and the hens some shades lighter.

By the year 1884, considerable progress in breeding down from the large Buff Cochins, and had quite a nice lot of Buffs between 2 and 3 lb. weight. They were fortunate in importing a dozen good Buffs, which reached the London docks in safety; and in January, 1885, The shipment was divided into two equal lots. Mr. E. Walton taking his choice and William F. Entwisle keeping the remainder.

This greatly improved the size and shape adding vigour and stamina.

In 1885, we became aware of the fact that a few Buff Pekins were bred in the U.S. America; and at considerable trouble and expense, we secured some of the best birds that could be sent from that country. These we found superior in colour to our pure Chinese, but deficient in foot and shank feather, and quite wrong in shape.

They were longer in neck and leg, and longer in back, and sloped from the shoulder down the back to the tail, which suddenly rose from a divided saddle. However, for the sake of the colour, we kept and bred from some of these Americans, and admit that they have been very helpful when bred with the better shaped and heavier cushioned birds we previously possessed.

Below: Well known breeder of bantams and publication editor from 1894.

In his book "Bantams" from 1894 William Entwisle noted that :

"Pekins are very short in wings and legs, and need to be kept on fine sand to preserve the leg and foot feathering."

"Pekins' eggs vary in size and colour, many being white, while others have the usual tint of the large Cochin eggs. Most of our Buffs lay tinted eggs — all our Partridge eggs are tinted ; many of the Blacks, Whites, and Cuckoos lay white eggs. The usual number laid is nine or ten, and then the hens want to sit and hatch. We usually, now, run five with each cock or cockerel for the first two seasons, but only two or three hens when breeding from a cock over three years old. We make their nests on the ground, and only raise the perches sufficiently high for the birds to walk underneath without touching them."

"One of our cock birds, a cup winner here, which we lent for the breeding season, 1890, to a well-known poultry judge in the U.S.A., after we had hatched thirty chickens from him, stood the voyage out well, had a successful season as a stock bird out
there, moulted well, and returned in time for our winter shows, looking none the worse for his twice voyaging across the Atlantic. He is breeding well this season, and walking his quartette of hens across the lawn in front of our window as we are now writing. This is more than we could reasonably expect of any of the imported Chinese birds."

Further colours of Pekin chicken were imported from China and bred locally over following years, these being black and cuckoos.

Pekin breeders make use Booted Bantams to create white Pekins and other colours.

They are rather round-shaped, and their carriage characteristictically tilts forward, with the head slightly closer to the ground than their elaborate tail feathers. The bird and the tail especially is abundantly feathered, and well rounded. The cockerels often have longer feathers that protrude outwards from their feet.

The range of Pekin colours is extensive, and the list is continually growing although not all are accepted in the breed standards.

If you research the history of the Pekin Bantam , you will read many stories about their origin. Some say that they were stolen in the 1800’s from a private collection of the Emperor of China, in Peking.

Others say that they were imported as a gift to Queen Victoria the early Victorian era. The birds from those bygone days were then bred, by keepers in the UK, crossed with other breeds of Bantams to create what we now know as the Pekin Bantam.

Some people say that Pekins are known around the world as Miniature Cochins or Cochin Bantams, but it is generally agreed in the UK, by fanciers and keepers, that they are in fact a true Bantam and are not related to or connected to Cochins.