Earthworms as food for poultry:

Picture the scene, your flock are scratching around the yard when one of your chickens, appears to be delighted when, after having scratched up the ground, she discovers an earthworm. She will pounce and devour it as she knows that her companions are as fond of worms as she is.

As most keepers will have seen with their flock, it frequently happens that as soon as they see a worm in her beak it will spark a game of chase until the worm is gone. It is common for my free range hens to find and eat earthworms and insects of all types.

It seems there is not any food of which poultry are so fond as of earthworms.

You should worm your chicken regularly according to the manufacturers instructions. Chickens can get intestinal parasites and gapeworm from insects so prevention is better than cure.

Below: A chicken eating an earthworm. 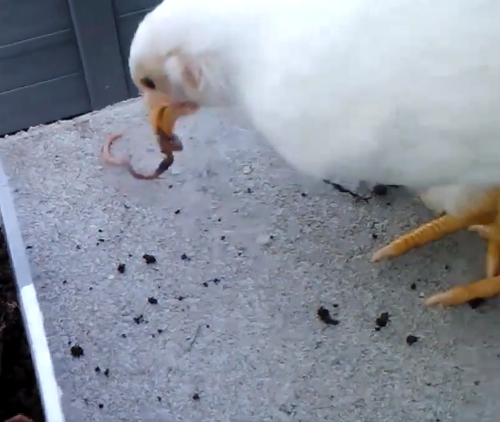 Earthworms make good food for chickens as they can be kept and stored alive and bred almost indefinitely as long as you have a some suitable container in a spot that isn't subject to freezing in winter and a food source.

Earthworms are a favourite food of chickens. Your flock can and will eat pretty much as many earthworms as they can find or you provide for them. Consuming natural insects and worms is good for the overall health of your birds.

If you have ever watched chickens scratching about in the dirt then you will know from the reaction when one of the hens find a worm that they really love them.

Chickens love earthworm and red roundworms. The bigger and more juicy the better.

The promise of insects is one of the reasons chickens spend so much time scratching around in the pasture.

You can try a little experiment, get a shovel an dig over some earth in your garden and watch your chickens all stand around like vultures waiting for an insect or worm to appear in the ground. Then watch how fast they wolf them down when they get hold of it.

What is the feed value of earthworms?

Earthworms are rich in proteins, minerals and fats which are good for chickens.

Some feeding trials were conducted with chickens from 1 day old to 8 weeks of age to evaluate the nutritional value of earthworms. The trial made 2 useful findings.

1. The growth rate of chickens fed on maize or a protein‐free diet supplemented with earthworms and vitamins was not significantly different from that of control birds fed on a complete grower diet (150 g protein/kg). This means that the diet of earthworms made little difference to a proper commercial diet.

Yes, chicks can eat worms from day one. Mother hens will show her babies how to find insects and worms.

Below: A chick eating a worm. 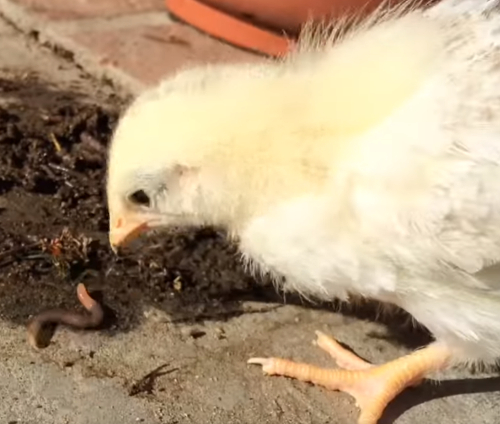 Just remember to worm your flock on a regular basis including the youngsters. Young birds are naturally  wary of some foods and it may take them some time to start eating them.

How many worms can a chicken eat in a day?

During the trial I mentioned above they were feeding around 50 earthworm equivalents a day. That means a full grown chickens would get 50 worms a day but as the trial started with chicks they got less.

If you want the tastiest meat and the best eggs from your poultry then a wide variety of foods is the best way forward.

Below: My hens would demolish these in a few seconds. 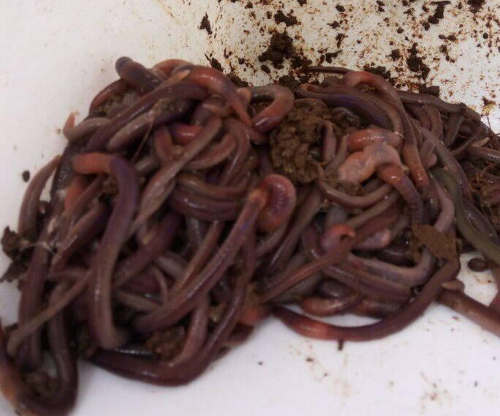 It would take around 50-150 worms, depending on their size, per bird per day, every day to give them enough protein on a worm only diet.

A free range chicken would do well to find 10 worms in a day while scratching around. If you have chickens and a compost pile you will know that your flock will dig through it quite quickly and eat all the insects they can find.

Can you feed chickens earthworms and other worms?

Chickens also eat earthworms, insects, and slugs of all kinds. Finally, they need to eat a little grit like sand and/or coarse dirt. They keep it in their gizzards to help them grind up the wild foods they forage. Once in a while, a rooster will catch a mouse and feed it to his hens.

Yes, feeding earth and red worms to chickens is an excellent idea. Mealworm are a different story, however.

Red Wiggler worms are not only good composting worms, but they can also be used as a protein rich, nutrient packed animal food (i.e., chicken feed).

Can chickens eat too many worms?

If your flock is free ranging and finding a few worms a day that will never do then any harm at all. If on the other hand you are raising worms to feed to chickens you can overdo it.

Chickens should never be fed just one type of food. They need variety in their diet.

What are the disadvantages of using worms for chicken feed?

Using worms for chicken feed is a good idea as long as it isn't taken to excess. Trying to feed your hens just on insects is a bad idea.

How do chickens get worms and insects?

Mostly through scratching in the ground. Chickens can dig quite big holes in the ground looking for tasty worms and insects.

They also seem to have an innate ability to find compost piles and if you have ever tried to do any gardening or digging with chickens around you will notice they all stand around like hawks waiting to pounce as you turn the earth over.

Can you raise earthworms for chickens?

So when I first started keeping chickens I learnt most of what I know from an ancient old keeper who had kept poultry for nearly 80 years. One of the things he had next to his hen house was a large wooden barrel kept about half full of compost. Every day he would add leaf litter and the veg scraps from his kitchen to the top.

A few times a week he would turn over the top and throw a handful of worms to his chickens. For him it was just one more way to supplement the hens diet with interesting nutritious food that was easy to produce for free.

To produce earthworms for chickens all you need is a container to hold your compost, worms, food scraps and some kind of bedding. The bedding can be shredded newspaper, composted manure, fallen leaves, or just about any organic, compostable material.

Try to avoid using too much highly acidic leaves like pine needles and oak leaves as the worms don't like them as much.

Why don't my chickens want to eat the earthworms I dig up for them?

Not all hens will eat earthworms and the reason is normally quite simple. Hatchery reared birds and started pullets will normally have been raised in huge commercial brooders and then finished in sheds before being sold and the reason is they never had a mother hen to show them what to eat and sometimes have never been outside to scratch in the ground and find any.

They have only ever eaten pellets or chick food and it may take some time for them to learn and some may never eat worms.

Its believed that earthworms often carry a series of other parasites inside of them that can be detrimental to the chickens' gut health. They instinctively know what is bad for them in many cases.

Chickens can and will eat almost anything, but it isn't usually a good idea to let them do so. Consuming earthworms can give chickens gape worms and intestinal parasites. Gapeworms are tiny parasites setting up shop in the trachea where they cause breathing difficulties and eventually death. Affected animals 'gape' for air when the load of worms in their throat gets too high and the windpipe ends up getting blocked.

All chickens should be wormed with a propriety product according to the manufactures instructions on a regular basis.

Where to find earthworms for chickens:

There are four methods of catching earthworms for chickens:

I have found that the best land with the greatest number of worms and the largest ones is not arable land but cool, moist pastures.

Worms also multiply in gardens as they seem to prefer the light dug soil.

By going out with a light at night, in damp, warm, calm and mild weather, the worms may be seen in multitudes all over the walks and grass-plots.

Build log and leaf litter piles with plenty of organic matter and harvest from them every few weeks.

Some birds like the lapwing and some others, stamp upon the ground with their feet, to cause the worms to come above ground. There are actually worm charming championships in the UK where the best charmers compete to get worms out of the ground just by tapping on the soil. It is supposed to mimic raindrops which bring the worms up.

Another method is, to go out at night with a light, particularly when there is dew or has been rain, and look for the worms that are then lying on the surface of the ground in the gardens.

These worms, however, are very easily alarmed and don't like light so soft shoes and soft light will make it more successful.

How to raise earthworms and red worms for chickens:

I have tried to produce large numbers of worms and it can be done but for me it was not worth the time and effort and it ended up almost costing the same in money terms. I live where there are cold winters and earthworms hibernate.

By far the easiest way to bring huge numbers of worms in is to create a compost pile. I have a few areas where I bury leaf litter and organic matter and leave covered for a few weeks. Then I simply uncover it and turn a few shovels of earth over and let the hens dig their way through it for a week or so. It keeps them entertained for ages and helps with the feed bill and it is free except for a bit of time. Then i refill it with organic material and compost and cover it back up for a month or two.

You should not try to make worms the staple food of your poultry. It won't be good for them in the long run and will start costing you time and money beyond a certain point.

Worms know how to dive very deep into the ground, in long droughts and cold weather,in order to shelter themselves from these changes.

Worms may be stored quite easily in barrels, casks or other suitable container filled about a third full with earth. There should be another third of lea litter or composting vegetable matter in which they will live quite well.

You should prevent the earth and compost in the wormery from becoming either too wet or too dry, by sprinkling at intervals with a little water and making sure any excess can drain easily out of the bottom of the wormery.

Worms like moisture but they are readily drowned when they have too much of it. It is consequently indispensable to cover the casks in rainy weather.

What other types of poultry eat earthworms?

All poultry eats earthworms. My guinea fowl also eat as many as they can find.

Below: Here is a duckling eating a worm. 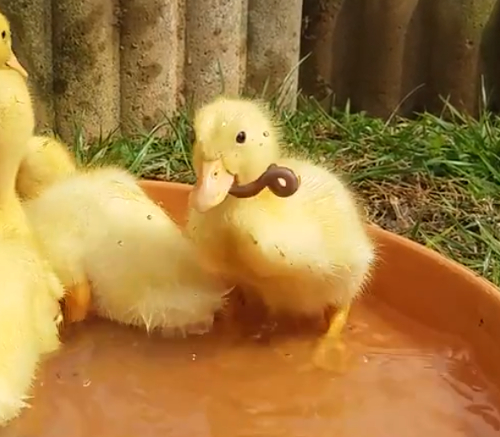 Below: Here is a turkey finding and earthworm. 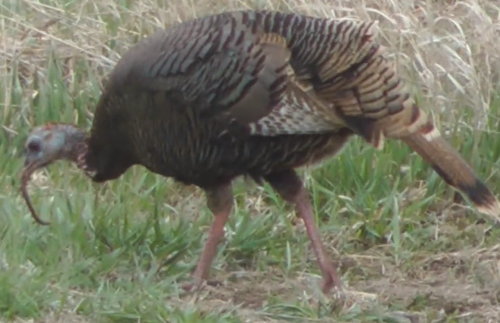 A full list of what chickens can and can not eat.