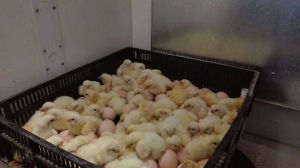 What does straight run mean?

With regards to poultry straight run means sold as hatched. Straight run chickens are nearly always less expensive since the hatchery does not have to pay anybody to do the demanding and dirty job of sexing chickens or ducks.

Straight run chickens are an as hatched selection and have not been seen by a professional chicken sexer.

If you were to order a dozen straight run chicks you may end up with 12 hens or 12 roosters or any mix in between.

Here is the thing, It will probably work our cheaper in the long run to buy sexed chicks than feed the unwanted males for weeks or months.

Below: A batch of white leghorns bought straight run.

When it comes to chickens another poultry the males are generally relatively useless because they don't lay eggs. There are many more backyard poultry keepers who keep chickens just for eggs and not meet.

One of the big problems with straight run chickens is the hatchery or breeder may remove those birds that they know to be female and include the surplus males in the straight run sales.

Straight run poultry has risks, mostly that you have no idea what the ratio of hens to roosters will be.

If I order " Straight Run Chicks" how many of each sex will I get?

One of the things I noticed while I was doing the research for this article was how variable the results were. I have to say from what I read most people were disappointed with their straight run purchase by roughly a two to one ratio.

If you were to order 100 straight run checks statistically you would get 50 males and 50 females.

This does not take into account a hatchery that fulfils its sex check orders first and it's straight run orders second. Under these circumstances you are much more likely to get more males than females.

On the two occasions I have ordered hatchery chicks I have got around 75% males.

What is the difference between stright run chickens and pulllets?

Should you buy straight run or sexed chicks ?

Is it better to buy straight run chicks or sexed. Well that depends on your situation and what you want from your birds. If you are buying meat birds then it makes little difference as they will all be processed the same way in 8 to 12 weeks or so.

You should only buy straight run poultry if you are happy dealing with surplus males. The reality of buying straight run chicks is that you are going to have to to deal with the extra boys one way or another.

Below: When buying rare breeds like these silver laced Pekins you often have to accept straight run or "as hatched".

You should also never buy a straight run chicks if you live in a zone where roosters are not allowed. Some boys start to crow quite early and you could find yourself having to deal with a load of teenage roosters.

If you plan to breed your chickens for show show or profit you should probably not buy a straight run chicks from hatchery but result to a proper breeder instead.

How much more expensive are sexed chicks?

So just what is the price difference between males, females and staright run. This table is a comparison of the prices from the 2019 season.

Price varies by breed. Most hatcheries include postage to mainland USfor a minimum order.

Where can you buy straight run chickens?

Most hatcheries and breeders sell them. It is the easiest way for the supplier to get rid of all his chickens.

The other reason is that it doesn't matter to you what the chickens will turn out to be if you put your surplus boys in the pot.

If you are buying broiler then it makes no difference what sex the birds are.

What are the ways to buy chicks?

From a hatchery you either need to purchase a certain number of males or females or as straight run with no choice.

All hatching eggs are straight run. There is no way to tell the sex of an egg you have to wait for incubation to finish and it to hatch. There is a company in Europe that has developed an artificial insemination process that uses something called sexed semen to make sure that the chicks that hatch are around 98% hens.

It will be a long time before it is available commercially everywhere.