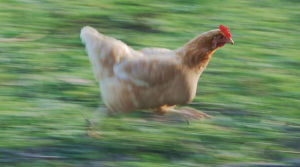 How quick are chickens?

As any keeper who has tried to catch their birds knows, chickens are not only quite fast but relatively agile on their feet.

My flock all run a slighly different speeds, in a little test I did last week I timed how long it took them to run down my 400 yard long field when I can to feed them.

They took between 20 and 30 seconds to get down the field which translates into a chicken speed of between 7 and 12 miles per hour.

My mixed flock of breeds and sizes runs at an average of 9 miles an hour on their short little legs, which is slower than your cat and potentially faster than your dog, depending on what breed of dog he is.

I have also noticed that some chickens do the comedy flapping run, a sort of half flying along. I'm not sure whether this makes them faster or not.

Below: Here is some of my flock running up the field with me.

Are roosters faster than hens?

In my experience roosters seem a little faster than hens. They normally get to me first when I arrive in the fields. It might be because they are on the lookout though.

This might be because they raise their hackles and charge about making themselves look more mean.

Despite their shorter legs my bantams keep up with the big hens.

As a rule chickens don't bother with the whole running unless there is something in it for them. Mine only run to escape, get food or try to steal treats or worms from other chickens.

Why do chickens run?

My chickens run to greet me when I come to feed them, getting to me first has it's advantages as I normally have some treats of some sort.

They also run to escape fighting and predators.

I often play a game with mine. I will collect  a few earthworms and then throw them top the hens one at a time. One hen will grab the worm anbd then follows quite an amusing game of chase the hen with the worm.