A question I get asked regularly is: Just what do show winning Barnevelders look like? It helps to have a profile of winning birds to work towards, an whilst I know what I do and how i select my birds, I don't show as much as I'd like to. Here is a collection of show winning birds from around the globe to inspire you.

This White Barnevelder Bantam with the rosettes and certificates is courtesy of Barend Bruinhorst, Barnevelder Club of the Netherlands. A great number of the birds you see on this page are shown under the Dutch breed standard.

Anybody can publish a breed standard,it is the interpretation that matters. I have several on this site, one is for La Bresse Gauloise and this is the breed standard. Just how the standard is interpreted by the judge at the show is always a matter for much speculation.

The easiest way to show you what the judges like in the show bird is to show you the winners. Below are pictures of birds from shows in Europe mostly and you should note that there are differences in what is allowed in different countries, the most notable of these is the difference in the pattern allowed on the chest of the male Barnevelder. The continental requires a solid black chest whilst the English allows for single lacing.

As we started with white Barnevelders here are a few more:

There are a few basic rules that are accepted everywhere, regardless of what you show and where.

Birds selected for showing should be symmetrical along the line down the body, twisted necks, deformed breastbones and wry tails should always be avoided.

Chickens for show should be in good health and condition. You will not be allowed to show a sick chicken. Please also observe bird flu restrictions and follow advice.

Birds should be acclimatised to the show environment and be used to being handled and seen by hundreds and sometimes thousands of people.

Know the rules and the club standards and requirements, infractions can see you disqualified and or banned.

All parts of the bird you are showing should conform to the standards, the comb on the Barnevelder is on the smaller side, or fine, and birds with a large or floppy comb should not be entered in the show. Photo above from Wim Meijer - Barnevelder Club of the Netherlands.

It is not just birds that are shown. Below is a selection of Barnevelder eggs in a show. These scooped a second prize. Notice the fabulous golden brown colour. The Barnevelder egg has never been very dark brown like that of the Welsummer!

Notice how calm the birds in the cages are. This Silver Laced hen is stood quietly waiting her turn. Notice the shape of her back and the full well rounded figure, the fine even comb, the orange eyes, yellow legs and excellent carriage.

On to some more genuinely stunning show Barnevelders.

Blue Laced Barnevelder male - above and hen below - Images courtesy of Marcel Eissens, Barnevelder club of the Netherlands

Below is a blue laced Bantam barnevelder - image from Thijs van Voorrthuizen.

This pair of standard double laced Barnevelders looks as if they have been polished for the show:

On to the Black Barnevelders:

Photo's above and below courtesy of Wim Meijer - Barnevelder Club of the Netherlands. Notice the stunning yellow legs charcteristic of the breed, the U shaped back and the beetle sheen.

The Silver Double Laced is possibly the most striking of the Barnevelders, and also possibly the most difficult to produce. The silver lacing shows up faults in the pattern of the feather and any red will leak into the colour giving a muddy appearance.

Producing birds as good as this takes many years of breeding.

People want to know for different reasons, some ask because they want to start showing birds and some just want the best they can get for their money. I hope you have enjoyed looking at these.

Lastly these are possibly my personal favourites:

The Double Silver Double Blue - Male at the top, hen below. 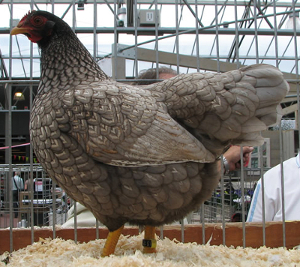 Here is a first prize winning Barnevelder from my recent trip to the Great Yorkshire Show in 2017. Large fowl soft feather.

Want to see whats it's like at a poultry show.

Do you have a show bird you would like to see here? Drop me an email.