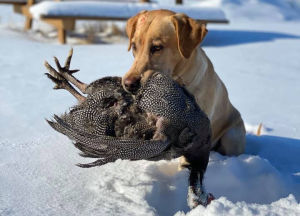 The Guinea fowl is a ground-nesting bird and spends much of its time scratching around on the ground in search for something to eat. Guinea fowl don’t particularly care for flying and prefer to run from a predator. When the vegetation is thick on the ground they are unable to run from their predator  and may get trapped and also may not see the predator in time to fly away.

Guineas can be kept safe by housing them in a predator proof coop and run and not allowing them to range too far. You can also help be removing cover predators might hide in and keeping grass short.

Guineas are unable to see in the dark and are easy pickings as a night time snack for predators on the prowl.

Below: Nobody wants to find this.

The Guinea fowl has numerous predators wherever it happens to be. Mammals including wildcats, dogs, wolves and humans and large reptiles such as snakes and crocodiles are the most common predators of the guinea fowl. It just depends where you live in the world.

During the Spring and Summer months Guinea fowl are more vulnerable because their predators are feeding their young and are more active in the day.

So although Guinea fowl can make good predator alerts they can also be vulnerable to attacks from foxes and other predators due to the time of year and the habitats in which the free range.

Anything that eats your chickens will kill and eat Guinea fowl.

From badgers to bears, if it is hungry it will have a go. Here in the UK foxes are probably the biggest threat. Elsewhere it is probably wild cats, snakes, members of the weasel family or whatever predators you happen to have about.

Below: A snake this size is never going to deterred by Guinea fowl.

They cannot out think a predator. A team of Guinea fowl is always better than having just a couple, but really if you free-range them, you can expect your flock numbers to decrease on a regular basis.

They are a great alarm system, and will immediately warn you of anything on your property such as the mail man, dogs, people, hawks, etc. This makes them a great asset. More on identification of predators.

I expect they can, I have seen a rat kill a fully grown chicken. It is not something I would worry to much about. If you are infested with rats you have other problems.

How to keep Guinea safe:

I have heard that Guinea fowl will chase and even attack foxes, wild cats and dogs.

If it is a very large flock or a very young wary fox, that may be the case but as a rule I would say they are not a defence against foxes, though they would probably raise an alarm. With Guinea fowl there is strength and courage in numbers.

They would charge at dogs being walked along the road outside our place, honking at the top of their little voices. I never saw a dog brave enough to jump the fence and have a go, but if they had the Guineas would have been easy pickings.

You really only have 2 good options, either remove the predators or tighten up security.