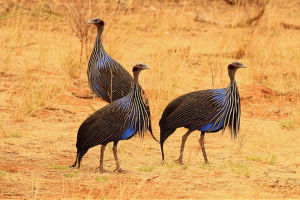 The vulturine guinea fowl (Acryllium vulturinum) is the largest existing species of Guinea fowl. Vulturine Guinea fowl are impressive bird.s and the brilliant blue colouring on this fowl is beautiful.

The Vulturine Guinea fowl got its name from its appearance. The bare skin of head and neck makes it very similar to vultures.

Below: Vulturine Guineas in the wild.

The vulturine Guinea is the largest (60 to 70cm) member of the family and the most striking by a country mile. It is sometimes refereed to as the Royal Guinea fowl, both because of it's colour, stature and amazing blue plumage.

It is a gregarious bird and forms flocks out of the breeding season finding protection in numbers. Like others is has a naked unfeathered head although it does have a crest of brown fluff. It has a longer neck and legs than the standard bird. The eyes are deep red. The legs are longer and the feet are dark grey.

It is a resident breeder in northeast Africa, from southern Ethiopia through Kenya and northern Tanzania.

The long neck projects into a cape of long, glossy, blue and white hackles. The breast is cobalt blue, a rare colour in the bird world and the rest of the body plumage is black, finely spangled with white. The wings are short and rounded, and the tail is longer than others in the family. It lays less eggs and has a smaller brood size than other guineas, usually 4 to 8 cream coloured eggs. Eggs take 24 days to hatch.

They have a call quite unlike the other Guineas, softer and more peaceful.

The sexes are similar with the female is slightly smaller than the male and with smaller tarsal spurs. Young birds are mainly grey-brown, with a duller blue breast and short hackles.

The vulturine Guinea fowl is a gregarious species. They flock together outside the breeding season in groups of around 25 birds. It makes loud chink chink chink calls.

It breeds in dry and open habitats with scattered bushes and trees, such as Savannah or grassland. It usually lays 4-8 cream-coloured eggs in a well-hidden grass-lined scrape.

They eat much the same as ordinary Guinea fowl, the food is seeds, leaves, berries, fruits, roots, bulbs, green shoots, small invertebrates and in some cases small mammals

This Guinea fowl is terrestrial and prefers to stay on the ground and will run rather than fly when alarmed. They can and do fly however but it is a second choice. They are fast and agile and prefer to stay hidden and keep to cover. Vulturine Guineas roost in trees.

The vulturines do not lay eggs until their second season and then lay in nests of 6 to 10 eggs at a time. To see if vulturine Guinea egg or keets are available to but take a loook in our for sale page.

How much does the Vulturine Guinea cost?

The Vulturine Guinea is a specialist fowl that may require permits, depending on where you live as well as special conditions.

This is the standard domesticated Guinea fowl found commonly in backyard flocks.

Below: The common helmeted Guinea fowl.

Domestic Guinea fowl, sometimes called pintades or gleanies, are poultry originating from Africa. They are the domesticated form of the helmeted Guinea fowl (Numida meleagris) and are related to other game birds such as the pheasants, turkeys and partridges.

The crested Guinea fowl is a similar size and shape to the standard bird and is found across most of sub-Saharan Africa.

It is bigger than domestic Guinea fowl and has a large crest on the top of its head instead of a helmet and black neck feathers.

Below: A crested Guinea fowl.

The white breasted Guinea is a medium sized bird up to 45 cm in length. It is the rarest Guinea and lives almost exclusively in forested areas.

Below: The white breasted Guinea fowl.

Below: The plumed Guinea fowl.

The least known of all the Guinea fowl family. It exists only in the tropical central lowlands of Africa. The Black Guinea is one of the smaller member of the family and has all black feathers and slate coloured legs. The face is bald and pink and a short crest of spiky feathers sits on top of the head.

The black Guinea fowl is most likely to be found in pairs and with their own young as a family group. It is a shy bird that is well hidden in the shadows of a forest and is rarely seen.

All of the wild Guineas are suffering from hunting and degraded habitat and numbers in the wild are falling.