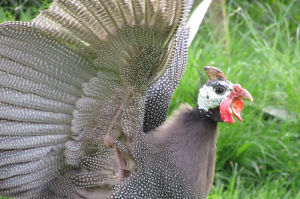 What is pinioning and should you do it?

To pinion involves permanently removing the primary and secondary feathers of one wing and removing the bony part of the wing as well. Pinioning is the act of surgically removing one pinion joint, the joint of a bird's wing farthest from the body, to prevent flight.

Pinioning is often done to waterfowl and poultry and prevents flight completely and the feathers never grow.

Below: A Guinea fowl in full flight.

Guinea fowl fly well and keepers spend a lot of time trying to get them to stay put.

What is wing clipping?

Wing clipping is the process of trimming a bird's primary wing feathers or remiges so that it is no longer capable of full flight. If performed correctly, it is a painless procedure and is quite distinct from pinioning, which is carried out by amputation of the wing at the carpal joint. The feathers will eventually grow back.

These procedures are used mostly by hatcheries who might be raising guinea fowl for meat or egg production.

Why clip the feathers or pinion the wing?

Pinioning - Removing the pinion joint of a bird stops the growth of the primary feathers, preventing the acceleration required for flight. The reduction in the size of wing makes flight impossible.

Pinioning may be done by a veterinarian or by a trained breeder, depending on the country in which the keeper is operating. I have bought Guinea keets that have been pinioned but have never done it myself.

In the UK is illegal for anyone other than a veterinarian to carry out the procedure. It is similar to other forms of modification of domestically raised animals, such as docking the tail of a dog.

Apart from the prevention of flight, there is commonly thought to be little long term negative effect from pinioning if performed correctly and at a young age

However, the animal welfare impact of pinioning is subject to increasing debate. For example, it is now known that the operation, which is often performed without pain relief, is just as painful in young birds as in mature birds, if not more so. Evidence also suggests that pinioning may cause a phantom limb syndrome similar to what is observed in human amputees. For these reasons this practice has been prohibited in certain regions and is subject to increasing scrutiny.

Pinioning is legally restricted in many countries. In England, if the bird is more than 10 days old its pinioning may only be performed using anesthetic and, regardless of the bird's age, the procedure is illegal unless performed by a veterinarian. It is also illegal to perform on farmed birds.

Day old keets will not bleed like older Guineas would, which is why this is done shortly after birth. Pinioning is a permanent one-time procedure used mostly by hatcheries to confine breeding stock.

Wing clipping - Wing clipping is usually performed by the birds' owners themselves. I do not pinion guinea fowl wings myself just clip one wings primary feathers. I usually clip in spring to keep the birds local during the laying season.

When egg season is done I leave the feathers grow back and that way they have 8-10 weeks to regrow before they stop laying in September. They can get off the ground and fly if they need to.

How do you clip a Guinea fowls wing feathers?

Techniques for clipping the wings of Guinea fowl vary primarily in the number of feathers cut and the amount of each feather left behind.

A mild clip on one wing only can impair a bird's flight greatly, as it renders the bird unbalanced in the air.

In most cases, it is only the primary flight feathers that are cut on one side causing the bird to become unbalanced in flight.

This clip is quick and simple to do, but leaves exposed cut ends that occasionally may cause a bird to chew on the cut feathers.

Another method of clipping involves cutting the flight feather above the level of the coverts, so almost the entire feather is removed.

This clip does not leave any exposed cut ends, but as more of each feather is removed, fewer feathers should be cut. However, these cut feather stumps are still present and may irritate the bird, causing significant discomfort.

In either case, clipping one wing will make the bird unbalanced so that it is not able to get over fencing. When on range, guinea fowl need to be able to fly up and away from predators if necessary so a trim to keep them flying too far may keep them safe but still allow short flights away from predators or up to roosts.

Is it cruel or painful to clip Guinea fowl wings?

If done correctly it is neither cruel or painful to clip a Guinea fowl wing. The feathers have no nerves and the bird will feel no pain when they are cut.

Guineas do not like being handled so you should be prepared to be kicked, scratched bitten and shrieked at all the while you are doing it.

Should you clip your Guineas wings?

This is a matter for much debate. Clipping the wings will impair or prevent flight which will stop the birds getting out of their pen and roosting in trees but not allow them to escape predators.

It also makes it more difficult for them to perch at night.

I have bought pinioned Guineas for my egg flock but I have fox proof enclosures. It doesn't seem to bother them.

How often do you clip a Guinea fowls wings?

You will need to re-clip the feathers on a Guineas wings every year after the moult.