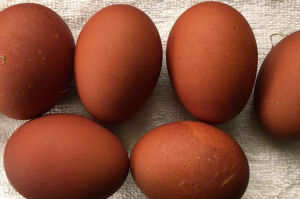 Where did the Barnevelder come from?

It is important to remember that the first Barnevelder was just a big brown egg layer from Barneveld. The only uniformity in the breed at the beginning came from the selection to produce the egg.

Around a hundred years ago in the neighbourhood of the village of Barneveld in the Gelderland Province, Holland, we are told that the fowls were of a very diversified nature as regards colour of plumage, and termed simply "farmers' fowls."

On a few farms Cochins were kept and their brown eggs were in great demand. It was the large brown eggs that drove the development of the breed much as it did with the welsummer, another famous brown egg breed from Holland.

In 1885 the crossed Cochins were mated with Brahmas and a few years later with Langshans.

By 1899 the chickens on the farms in the neighbourhood of Barneveld showed some uniformity, due it is said to the poultry-keepers buying sittings from those farmers who brought the finest brown eggs to the market.

Below: The original Barnevelders looked nothing like the modern standards.

In 1906 further crossing took place with the Buff Orpington making the birds a little more partridge-coloured.

It was in 1910 that steps began to be taken to obtain more uniformity in colour and type, and from this time dates the name Barnevelder. The introduction of the trap-nest followed, and in 1921 a Dutch association of Barnevelder breeders was formed and a standard for the breed fixed.

For this history is well documented and for this we are indebted to Messrs. Wijk and Ubbels, from the paper read by them at the World's Poultry Congress, 1930.

" The colour of the feathers shows some similarity to that of the Indian Game Cock, although this breed has not been used in the creation of the Barnevelder. The males, however, have a seamed neck. In breeding regard is paid, in the first place, to a large number of large brown eggs, and only in the second place to the colour of the feathers.

By its build the Barnevelder belongs to the so-called medium heavy breeds."

Cochins, Brahmas, Langshans and Orpingtons then are given by these Dutch authorities as the make-up of the Barnevelder, in conjunction with the local farm crosses. We can hardly follow the plumage colour from this combination. Maybe the partridge variety of Cochin was concerned in the first place, which would explain perhaps the black breast in the male and some of the pencilling on the females.

One might have thought that Buff Orpington introduction would have also brought along broodiness, yet it has been one of the most noticeable features in the breed since the importation. Barnevelder females seem to be completely or almost non-broody.

Many authorities apparently give credit to the Gold-laced Wyandotte and the Partridge Wyandotte as taking their places in the make-up of the breed.

Heavy breeds of yesterday for the most part laid brown eggs, and it has only been since such breeds were taken up for showing and record egg production that this shell colour has been lost.

Responsibility for this may perhaps be shared by breeders not selecting for shell colour, selecting for  greatly increased egg production, and the introduction of light-breed blood by utility breeders to heavy breeds, this latter being practised extensively at one time for test-winning and to reduce or even breed out broodiness. Many females in some strains of heavy breeds to-day lay almost white-shelled eggs.

That the Langshan played its part in the make-up of the breed is undoubtedly very true. This is the breed that in England at one time laid real coffee-coloured eggs.

The earlier specimens of Barnevelders arriving in this country manifested plain enough signs of Croad blood in their back-breeding, for feathered shanks, also feathers on hocks and between the toes, were most noticeable among the defects.

The Barnevelder in England:

English history may well date back to about 1921, when rumours were current that Barnevelders from Holland had been imported and that they would attract the British poultry public by their large brown eggs.

It was in that year that some of the first specimens of the breed were imported by aeroplane as day-old chicks from Holland.

In May, 1922, the British Barnevelder Club was formed, a standard drawn up and sub- mitted to The Poultry Club, and the first Club Show, with 187 entries in 7 classes (120 in 5 exhibition classes and 67 in the two for utility) was held at Olympia. In the same year a section for the breed was arranged at Harper Adams laying test, drawing twelve entries or pens.

It has been stated that the UK's first interest in the breed was aroused by The World's Poultry Congress held at The Hague, when English breeders visiting this exhibition were attracted by the very large rich-brown eggs produced by the Barnevelder and importations followed.

Prior to seeing specimens of the breed we were all more familiar with their eggs quoted on the London Egg- market as " Dutch all-browns," and which on their size and rich colour realised always so much per dozen more than even the best English products.

When the first specimens came to this country a Dutch standard of sorts duly accompanied them. Translation upon translation into English we personally obtained to secure as correct a reading as possible, but with the same confusing end.

One may therefore understand how confusing the Dutch standard for the breed appeared in the early days through being less defined. In their paper read at The World's Poultry Congress, 1930, Messrs. Wijk and Ubbels refer to the males as having a seamed neck.

That description would never remain acceptable in any English standard, or there would be half a dozen readings of it. The English fancier tries to secure one clear definition in order to obtain uniformity in breeding, showing and judging.

The Dutch description of the neck-hackle for males as black with red was equally unacceptable because it was not sufficiently definite. It could stand for too many variations such as a black feather laced with red or a red feather laced with black, black ending red, red ending black, and so on.

Most of the specimens first imported lacked the uniformity in type and colouring. Also at their extraordinary defects. The only outstanding feature was the large brown egg!

The majority possessed that asset without a doubt, and it was rare for pullets, no matter how reared or when hatched, to commence with an egg under 2oz. Some of the hens laid brown products of extra size.

The imported specimens seemed most lacking in this direction. We have never seen a breed with such low-grade head points. Light eyes, green and even white eyes, were common; lobes were often almost white; combs carried the very ugly double ends and sprigs; and the hens had that thick skull and coarseness so common to the lazy or sluggish type of bird.

Feathers between toes, stiff feathers on hocks and down the sides of the shanks were common defects. Wholly white feathers in wings and tail, also wholly white under-colour were among other general failings.

High saddles, wry and squirrel tails, with deformed or rounded backs were plentifully in evidence. Many then suggested that the Dutch breeders, not wishing us to break into their English all-brown egg markets, sent us their worst specimens.

Below: The modern Barnevelder is nothing like the original imports and the amazing large brown egg has mostly gone!

How could that be when these birds laid large brown products? It was probably, then, a matter of eggs first and selection of birds or breed second !

Taking most of the males, breast colour was black, but in some splashed or laced. Top-colour varied considerably as regards both hackles and wing-bows. Hardly a male displayed definite markings in neck and saddle hackles as we understand and have such to-day.

Black-with-red might or might not have covered a general description of hackles, because apart from the black the colouring varied from carrot-red, sandy, brick-red, etc., to bright yellow.

Taking the females, the neck hackle was in most specimens freely coloured, a kind of black feather laced with colour. The latter more often than not was a brilliant yellow, but on many specimens was " carroty," brick-red or sandy. In many the neck was black.

This colouring usually covered the hackle from top to base. Body colour varied, but for the most part the females were partridge marked (stippled or peppered), splashed or single laced.

The plumage colour was mainly black, but the centre of each feather was either splashed or shafted with colour, this latter varying from yellow to brick-red. By splashed or shafted I mean that a centre narrow stripe of colour ran down the shaft of each feather. Sometimes it kept to the quill of the feather, at others it was broader, and in a goodly number of specimens so large as to resemble a single laced variety.

This fact might well point to the use of gold-laced Wyandotte blood in the make-up of the breed, or at least in certain Dutch strains. Many looked like inferior farm-bred Golden Wyandottes with very heavy outer black lacing and narrow coloured centres.

The odd part was that the wing-bay (that part of wing seen when closed and in position) was in almost all cases stippled or peppered, or even pencilled — indicative of a partridge variety and not a laced — and in some specimens the feathers on wing-bows, back and saddle were stippled and peppered. The ground-colour of breast and wing-bows might be clean, but that on the back and saddle leathers was peppered.

It was from these first matings of the imported birds that the full blacks were found to be so prevalent and some bred the Barnevelder to this colour. Indeed it even had it's own club for a great many years.

The focus since has been not so much for the large brown eggs that the bird was originally famous for but for the shape and feather patterns.