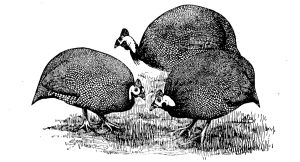 Where did Guinea fowl come from?

Guinea Fowl come from Africa and have been hunted and  bred for food in many countries for hundreds of years. There are even drawings of them on the walls of the pyramids.

The many different colours have been produced by cross-breeding over the years. The domesticated Guinea Fowl originated from one of several wild species on what used to be called the Guinea Coast, hence the name, of West Africa.

Guinea fowls, of which there are eight distinct species at present known to naturalists, are all natives of the African continent, or of the adjacent Island of Madagascar. The bird is found wild in Western Africa, extending from the Gambia southwards, through Ashanti to the Gabon and is also said to exist in the Cape Verde Islands.

In African countries Guinea Fowl are still seen in the wild, hunted in the same way as pheasant or partridge are in the UK. I have seen a flock of escapee Guinea near stock reservoir in the forest of Bowland in England so they are adaptable and will breed in the wild here if allowed to.

As the Guinea fowl was well known to the Romans, and bore a high value at the public and private feasts at the time when the luxury of the empire was at its greatest height.

The Romans held comparatively little to do with South Western Africa so it was probably trade that brought the guinea fowl to the empire. and most likely through Egypt, with which country they had constant trade.

We know the Ancient Egyptians kept fowl very similar to the modern day chickens and even mastered artificial incubation. A type of Guinea Fowl are said to have been held in domestication by the ancient Egyptians from around 1475 BC which spread to the Greeks in about 400 BC and later the Romans by AD 70. It is likely these died out with the empire and were reintroduced in the middle ages.

To date, guineas are ubiquitous and are found in pockets the the world over with the possible exception of South America. It is believed that they might be more popular were it not for their harsh and seemingly never-ending cry, and their flighty disposition.

Domestic Guinea fowl, sometimes called pintades or gleanies, are poultry originating from Africa. They are the domesticated form of the helmeted guinea fowl (Numida meleagris) and are related to other game birds such as the pheasants, turkeys and partridges.

Although the timing of their domestication is unknown, there is evidence that domestic guinea fowl were present in Greece by the 5th century BC.

Wild Guineas are strong flyers and domestic ones have not lost the ability. They have no trouble getting into the tops of tall trees

Some people raise them for their unique ornamental value. Of the three basic domestic varieties (the pearl, the white and the lavender),the purplish coloured pearl is the most common.

The largest member of the family is the 60 cm Vulturine guinea fowl, found in tropical East Africa. They are classified in the phylum Chordata, sub-phylum Vertebra, class Aves, order Galliformes and family Numididae.

Within the domesticated species, many color variations have been bred forth aside from the "pearl" or natural color of the helmeted guinea.

The Guinea-fowl was introduced into the warm and genial climate of Jamaica, which closely resembles its own, nearly 200 years ago where  it soon became naturalised and has been described as wild game for more than 150 years.

The 1912 Standard encyclopedia of Modern Agriculture noted that:

"The number of Guinea Fowl kept (in Great Britain) was comparatively small due to the demand for their meat being restricted to a few weeks very early in the year between the game and chicken seasons.”

and because "They had the reputation of being amongst the most ill-tempered of all poultry breeds, making them difficult to keep with other birds."

Missionaries introduced Guinea Fowl into New Zealand at the Bay of Islands from India in the early 1860s by the Canterbury Acclimatisation Society, some of which were sent on to Nelson in 1864.

Other introductions followed, and although most Guinea Fowl are kept under domestication, feral flocks have been reported in the North Island.