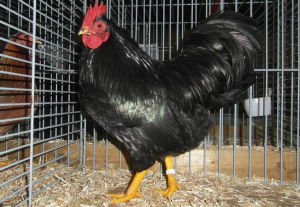 The black came originally as a sport from the main variety and was the first solid colour of Barnevelder to be produced. It was very common with the earliest imported Dutch stock to find they produced some black offspring.

Invariably these sports were bred together to establish the black as a separate variety.

Below: A black Barnevelder hen.

After all, these pullets were pure Barnevelders. No crosses were used to produce the large fowl, a percentage of the original stock produced completely black birds.

There is also a bantam black but I have never seen these in the UK, only at continental poultry shows.

Black Barnevelders should produce a large brown egg and have all the characteristics of the breed including a medium comb.

The feathers must have the beetle sheen with no white or other colours.

For a while the black was very popular and even had it's own distinct club separate from the main Barnevelder club.

Other types and colours of Barnevelders.