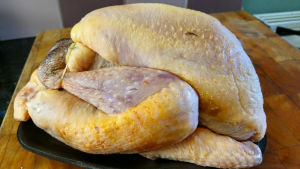 Below: A Guinea fowl trussed and ready for cooking.

In their native Africa, Guinea fowl have been used as domestic animals for hundreds of years as the large size of the guinea fowl means that just one bird can provide a great deal of food.

Today, Guinea fowl are farmed around the world for their meat, eggs and feathers. Guinea fowl have always been popular in France where some 54 million are produced annually for the table market.

The Guinea fowl may be considered as somewhat intermediate between the pheasant and turkey. After the pheasant season, young birds that have been hatched the same year are excellent substitutes for that fine game, and fetch a fair price.

They should never be fattened, but have a good supply of grain and meal for a week or two before being killed.

The Guinea fowl is about twenty-two inches long, and from standing high on its legs, and having loose, full plumage, appears to be larger than it really is, for when plucked it does not weigh more than an ordinary young heritage breed.

The flesh of the young bird is very delicate, juicy, and well-flavoured, but the old birds, even of the second year, are dry, tough, and tasteless.

What do you feed Guinea fowl being raised for meat?

They are either free range or housed and managed like meat chickens except for a more generous floor space of about 900 cm² per bird. They are ready to eat from 14 weeks, depending on how you like them, with a dressed weight of 800 g to well over 1kg and conversion of feed to gain is about 4:1.

If you are ranging your meat guineas then this is fed in addition to whatever they find and graze on.

They should be starved for 24 hours before killing.

Time to slaughter, how fast do Guinea fowl grow?

Guineas are not quick growing birds and it varies slightly. Never before 12 weeks, 14 to 16 weeks for small, young and tender and 20 to 16 weeks for full grown carcasses.

Anything older than 35 weeks will be like eating boot leather.

In France Standard Guinea fowl are usually slaughtered at 77 days, label rouge at 94 days, and certified at 82 days.

The meat is very lean and breast meat yield is about 25% of live weight. They have a high amount of meat to waste so you get a better yield with less wastage than with chicken.

It is common practice to raise the surplus males for eating.

When selecting Guineas for breeding for meat production the process of selection is the same as for ordinary Guinea fowl but with a bias towards size, weight and growth speed.

What is the best way to slaughter a Guinea fowl?

Any methods for killing a chicken can be used with Guinea fowl. Just make sure the animal does not suffer and that the process is quick and clean.

What does a Guinea fowl carcass weight at slaughter?

The body weight of 12-week-old males and females was between 1.2kg and 1.3kg rising by 150 grams a week until fully grown.

At 16 weeks of age, males and females had significantly higher body weights and carcass weights compared to birds at 12 weeks of age.

The carcasses of older birds contained as a percentage of the total, more breast muscles, leg muscles and skin with subcutaneous fat, and less wings weight, with a males weighting 3 to 5 % more.

French Vs other types of Guinea fowl:

French guineas produce fewer eggs than the common guinea fowl. They are often raised for meat because they grow faster and larger, as much as 2 pounds heavier than the common Helmeted Guinea Fowl as adults.

The French are coloured identical to the Pearl, black with white spots. It is very plump and well-proportioned.

Guinea fowl is very tasty, somewhat similar to pheasant. French birds have been selected to grow heavier than those reared in the UK and are quicker to mature.

Guinea meat is richer tasting than chicken meat with the added bonus of having less fat and fewer calories. The flesh of the young bird is very delicate, juicy, and well-flavoured, but the old birds, even of the second year, are dry, tough, and tasteless.

The pure White Guinea fowl are a little less gamy tasting and have a lighter colour to the meat. Closer to a free range chicken.

Because they are such active birds the leg meat need careful attention when cooking.

One blind taste test indicated very little difference between chicken meat and Guinea fowl meat. However, this may depend on the diet as there are reports of a ‘gamey’ flavour. Their meat is darker than chicken meat.

Commercially, many Guinea fowl in the UK are bred from imported French stock - they are apparently around 2lbs per bird heavier and grow twice as fast as the British strains.

In France, Guinea fowl appear in the supermarkets at the end of September in order to coincide with the shooting season -although they are not shot, they are still considered 'game' and are therefore a winter rather than summer feast.