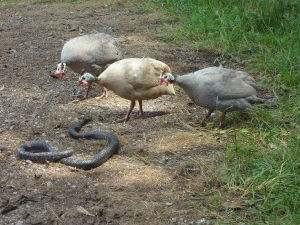 Free-ranging guineas spend most of their days foraging and will eat snakes if they will fit in their beaks. They wander as a group, marching around and devouring anything they come across as they move through the undergrowth.

Snakes dislike disturbance and noise and Guineas are both of those things. They may also peck at snakes and a well aimed blow on the head may kill young ones.

Below: Guinea fowl around a snake.

When they discover something, they close ranks, circle their prey, and move in for the kill. All the while, they keep up a steady stream of whistles, chirps, and clicks, a sort of running commentary on the day's hunt. All insects,mice, frogs, shrews will all be ripped to shreds or swallowed whole.

Will Guineas keep snakes away?

There is plenty of evidence to suggest that they will surround, harass, deter, and even kill small snakes, but it’s unlikely that they will eat snakes above a foot or so in length. It also depends on the size and ferocity of the snakes and whether it is there to feed on the Guineas or just passing through.

The ones I have seen dealing with snakes generally involve crowding around the snake and annoying it to death by honking.

Guinea fowl are great snake deterrent and do a great job of keeping the snake away, and the at the very least they will warn you that snakes are around.

Guinea fowl do sound the alarm when a stranger, intruder or predator invades their territory which can alert the land owner to the presence of predators or people in the vicinity which means that they can make good guard birds.