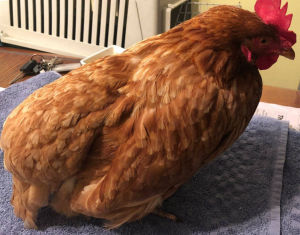 When your hens lay an egg, the left ovary (the right ovary is typically non-useful in most birds) will start delivering 'ova' or yolks into the infundibulum or oviduct which, in normal egg production, will 'catch' the yolks, to start shipping them through the remainder of the reproductive tract until they are eventually expelled as full-grown eggs.

Egg yolk peritonitis happens when a yolk misses the oviduct and ends up amongst the internal organs of the chicken. It is sometimes referred to as internal laying

Egg yolk peritonitis, sometimes referred to as egg peritonitis (EYP for short) is a disease condition commonly seen in the backyard hens of all ages but is more prevalent in production hybrids. It is characterized by the presence of albumin or fibrin like material with a cooked appearance among the abdominal viscera.

Egg peritonitis and egg binding may happen simultaneously, which can create confusion because of both outcomes in an obstructive mass within the oviduct. If the egg is not grossly visible, slicing through the mass in the oviduct and finding a shelled egg in the centre demonstrates egg binding.

What is EYP or Egg Yolk Peritonitis?

Egg yolk peritonitis is the inflammatory response caused by the presence of yolk material in the peritoneum (the thin layer of tissue covering the inside of the hen's abdomen and most of the organs) from a ruptured egg or a retained egg in the oviduct.

In chickens with blockage or damage to their oviducts, the egg does not form properly and the yolk is laid internally into the belly or abdomen. This is called internal laying.

The collection or aggregation of caseating exudate in the body cavity resembles coagulated yolk, which is the reason behind the common name egg peritonitis.

Egg yolk peritonitis is a mild to moderate diffuse peritonitis without exudate resembling a coagulated yolk that results from the free yolk in the body cavity.

Below: An Xray showing egg laid internally in the abdomen.

When your hens lay an egg, the left ovary (the right ovary is typically non-useful in most birds) will start delivering 'ova' (yolks). These are then passed to the infundibulum (oviduct) which, in normal egg production, will 'catch' the yolks, to start shipping them through the remainder of the reproductive tract until they are eventually expelled as finished eggs.

Why does EYP or egg yolk peritonitis happen?

In a chicken suffering from egg yolk peritonitis, the yolk is not caught by the infundibulum or oviduct, however, is instead discharged into the coelomic hole. Here, it gives the ideal development medium to bacterial development, with E. coli being the most isolated bacteria from affected chickens.

The yolk material itself may just cause a mild inflammatory reaction and be reabsorbed by the peritoneum.

Since egg yolk material is an excellent medium for bacterial contamination it may become infected. Escherichia coli is the most frequent bacteria isolated from the affected birds. Other common types of bacterial organisms that have been isolated include Klebsiella, Proteus, Staphylococcus, and Streptococcus.

Egg yolk peritonitis rarely occurs on it's own for no reason and is often the result of an underlying condition. It frequently happens as a secondary or concurrent event too many other reproductive conditions, including:

What are the signs and symptoms of Egg Yolk Peritonitis?

The clinical sign and symptoms that indicate the disease in chickens.

Although the signs recorded above will give a decent marker with regards to whether your chicken might be sick, Some or the entirety of the above might be shown by a hen suffering Egg Yolk Peritonitis.

All things considered, any ill chicken that has gone off the lay, possibly lost of muscle over her keel, or is looking in general in poor condition ought to be checked by a veterinary specialist.

Hens with egg yolk peritonitis, in combination with the signs referenced above, will normally have a swollen abdomen. This is because of the infection within the coelom causing fibrin deposition and fluid accumulation, and it is typically this that is a give-away sign that you have a bird that is in the more advanced phases of Egg Yolk Peritonitis.

Diagnosis of Egg Peritonitis is based on:

A chicken can survive egg yolk peritonitis and the earlier the condition is diagnosed and treated the better. Once infection sets in and the condition has reached the swollen and distended abdomen stage the prognosis is poor.

They never survive without treatment.

How long can a chicken live with egg yolk peritonitis?

Between 1 and 7 days depending on whether there is infection present of just the inflammation from the egg contents in the abdomen. It will result in death without treatment. The health and condition of the bird is a factor in survival but if an infection is present the chicken will succumb within a day or two.

As EYP is often associated with other conditions like egg binding, birds are often overcome in 24 hours.

How do you treat peritonitis in chickens?

Treatment for egg yolk peritonitis is either antibiotics or surgery with supportive care in both cases.

Surgery may be to remove the obstruction in the oviduct and empty out the contamination or to remove the ovary and spay the chicken. Hormones or implants may be used to stop laying.

Below: Radical surgery to remove the contaminents and the ovary.

Antibiotics to treat the infection. An under-dose may promote resistance and some infections are resistant to tetracycline and Sulphonamide, ampicillin and streptomycin. Mostly used antibiotics are Furazolidone, Chlortetracycline, Oxytetracycline.

Supportive care can include pain killers, prebiotic, probiotics, enzymes, digestive acidifies, Vitamins, immune enhancer and anti-inflammatory drugs. Some essential oils regularly have a significant inhibitory impact on E.coli, Oregano essential oil contains carvacrol which is known to be antibacterial at concentrations between 0.1 and 6.3%. Vitamin A & E supplementation are prophylactic and therapeutic care.

Can you prevent egg peritonitis?

Egg yolk peritonitis is not contagious at all and cannot be spread from one chicken to another. You don't have to worry as it won't spread in the flock.

More than one chicken in your flock may suffer from it as it may have a genetic susceptibility in poorly bred chickens.

Humans need not worry, although we can get peritonitis you won't get it from your chickens. It requires a very specific set of conditions. Egg yolk peritonitis is a internal laying condition first and that cannot be caught.

That said an infected chicken is a source of bacteria and normal hygiene procedures like hand washing and disinfection of work surfaces and carry crates should always be followed.

Is egg yolk peritonitis or internal laying painful for chickens?

Yes. Chickens with egg yolk peritonitis display all the classic symptoms of being in pain. There is the physical size of the yolks in amongst the organs, not to mention the inflammation that goes with it and the sometimes large quantities of fluid present in the abdomen.

Below: EYP is a painful and debilitating condition.

It can be distressing for chickens in other ways as the mass in their belly can unbalance them causing them to struggle and flop about.

You vet may prescribe a specialist painkiller for your chickens, you will be pleasantly surprised how many there are to choose from.

Is there any home, natural or homeopathic treatments for internal laying or egg yolk peritonitis?

No, there are no natural or home remedies for for EYP. Egg yolk peritonitis is a serious physical and rapidly moving condition that will kill a chicken unless treated radically with surgery and antibiotics.

Colloidal silver is often touted as a remedy but it isn't considered safe or effective for any of the health claims it makes. Silver has no known purpose in the body and not an essential mineral and none of the trial show any effect at all.

All home and herbal remedies can and should be given for supportive and palliative reasons to make the birds feel better and they may help with the chickens overall health but they won't cure the disease or speed recovery.