What can we learn from the way they keep chickens in other countries?

So can we decadent western poultry keepers learn anything from the scavenging subsistence flocks in rural India?

Quite a lot it seems. I have learned that they have:

Below: a subsistence flock in rural India. 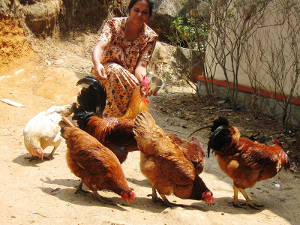 From the country that gave us Asil, Indian Game and Brahma’s most chickens kept in the average Indian backyard flock are not recognisable as a breed as such. Birds of mixed parentage are the preferred choice for smallholdings. Chickens are generally kept in the exact opposite way to what we do and are left to free range completely with no resort to drugs or chemicals.

Rural subsistence poultry keepers suffer from most, if not all of the same problems as we do in Europe or the Americas, hatching issues and the loss of birds of all ages to disease, predators and theft.

Birds in completely subsistence systems roost in trees and are expected to find a great portion of their own food.

If you think we have problems finding egg in undergrowth laid by wandering hens then imagine the issues in a semi tropical environment with birds allowed to range over an entire smallholding.

Broodiness is very much a positive character trait in rural where there is often no recourse to an incubator.

The rural poultry flock is much more of a tool in the subsistence agriculture system. Chickens and ducks are used to clear fields before planting and allowed to clean up after harvest to make sure nothing is missed. Both are practises we could make more of in the west.

They are genetically adapted to the heat and humidity, a selection practise we tend to ignore. I raise several breeds not really suited to the uplands of Yorkshire.

One of the most surprising things for me was finding out that the incidence of loss of chickens to accident is roughly the same in rural India as in the west, around 1.4% leading us to conclude that there is a subset of chickens that will find a way to wring their own necks regardless of where they are raised and how careful their owners are.

Chickens are much more savvy than we give them credit for and the rural chicken keeper has found a multitude of practical methods to keep their birds safe.

There are quite a few more predators in rural India than the home counties of England or urban US but the advice is the same and stands up quite well regardless.

Some sort of dense cover over at least part of the run will protect poultry from aerial predators like hawks and chicks from corvids. It also means birds have somewhere to escape to from ground predators.

Below: Chickens like trees and they provide cover from aerial predators and places to roost. 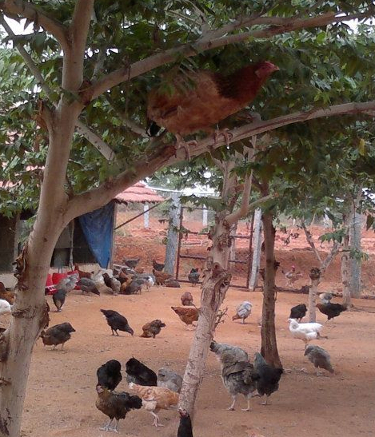 2. Remove cover from the margins of the range where predators would hide.

Open margins means little cover for ground based predators like foxes and cats that rely on a swift attack from under cover.

Fire ash and local remedies for parasites keeps them managed rather than getting rid of them altogether.

5. Keep birds adapted to your region.

My barnevelders probably wouldn’t last 5 minutes left to fend for themselves as they are large ladies that don’t really fly well and couldn’t cope with the heat.

Disease doesn't seem to be the problem you might think. Rural flocks are hardier than the stock we use in the west and there is relatively little mixing of birds from one area to the next. Also it would appear that natural selection has left them with stronger birds.

Good evidence if ever it was needed of the importance of selection of the strongest birds with desirable characteristics by breeders.