We all know the empty feeling of looking in vain into an empty coop in the morning. This article deals with the finding of open doors after the thief has been rather than piles of feathers left by predators.

During the course of my looking into poultry thefts I have discovered that:

In my experience chickens and poultry are stolen for one of three reasons:

The high price of quality and rare birds makes them a target and as they are often kept outdoors and away from the home they tend to be easier to steal.

I have had 2 birds killed out of spite by neighbours:

- one was beaten to death in a hedge whilst sat on a nest. This individual just didn’t like anybody having poultry. It is easy to steal a mother hen and chicks as she is vulnerable.

- we had a  friend whose neighbour actually put his Jack Russell in the run with their hens while she was out at work.

The important thing is to have accurate, close up and descriptive pictures of your poultry.  They should show any patterns, wing tabs, leg rings or other identifying marks or features. Make sure to include a scale to show their size.

Keep records of your chickens:

Show the police and to post on social media, there are plenty of Facebook groups for lost or stolen animals. And a few posters in the local community would help.

I had a considerable percentage of my breeding stock stolen recently. That is the reason for this article.

How to stop the thieves:

I decided to look into how to stop, or at least make it more difficult, thefts of poultry. There is more to do than you might think.

The first section deals with marking the chickens so that they are not able to be sold on and can be easily identified. The onus will be on you to prove ownership to an auction mart or authorities. To your average police officer one Rhode island red will look just like another.

Do not leave poultry crates or plastic totes or boxes lying around. You are just making the thief’s life easy.

Leg rings - Most casual thieves do not remove leg rings, especially metal type crimped ones. Make sure they are  the correct size and properly set. Wing tags may not even be noticed.

Tattooing - I have bought a cheap tattoo set from amazon.  I mark my birds under a wing with a series of coloured blocks. It would work just as well with your name. I can take a picture of them and pass to the authorities and publicise locally and on social media. This takes two people and there is a recovery time for the hens. It is genuinely permanent.

Smart water - Supplied by specialist company and used to mark items of value. I asked them if it could be used to mark chickens and there is no reason why not. It would need to be applied yearly after the moult to the primary wing feathers on the underside of the wings.

Painting the feathers like racing pigeons . Paint is sprayed through a stencil on the underside of the wing or permanent marker is used to write on the feathers. Do not forget to renew after the moult.

GPS trackers  and technology.  GPS transceivers are expensive but small enough to be hidden in the feathers of a bird. It's location can be passed on making it easy to follow and retrieve your stock.

Identity chipping Just like with cats and dogs. It might be expensive but if you are protecting valuable breeding stock it may be well worth the expense.

Poacher traps -  these are a tripwire based deterrent that sets of a blank shotgun cartridge. Or if allowed where you live pepper sprays or dye cartridges to mark the intruder with bright purple dye for easy identification.

Thief detection powders and dyes. These can be sprayed or blown over intruders for easy identification.

Some or other deterrents that may be illegal in your country.

Please do not confront thieves. They may be many of them and they may be armed. If you have just covered one in purple dye or frightened the living daylights out of him confronting him or them is unlikely to go well.

Do write a note like this one telling the prospective thieves what you are doing to protect your flock. You will be surprised how well it works. Make it a good size and place one or two copies where they will be seen. 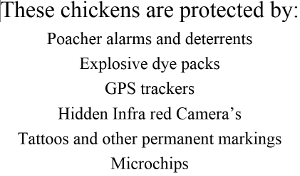 I have typed it up but after talking to a reformed burglar I was surprised to learn a hand written note would be more effective.

Air horns  - a 12v battery hooked up to a set of car air horns make enough noise to wake the dead.  I do not think a thief will stand by and listen to them. In fact I know this deterrent works brilliantly as I have used it successfully. It does however wake everyone up with a start and will annoy the neighbours.

Small deep pea gravel - is noisy to walk  on and known to not be liked by burglars. It crunches underfoot.

Good fences and locks. Sturdy fences and barbed wire , not necessarily to keep the thief out but to make sure they use the entry point that you have booby trapped. Locks will generally be smashed or prised off and fence panels ripped out if they can't get in. It is really quite simple to get them to trigger your deterrents. The object here is to have a fake entrance that look obviously like the real one.

In a similar vein, remove any surplus gates or entrances and try to cover your property from sight. Plant willow for cover and thorns for protection. Make sure gates cannot be lifted off their hinges.

The casual thief is unlikely to risk barbed wire unless they have cutters and that takes time.

Keep Guinea fowl. They make a ruckus whenever they are disturbed.

Make sure the coop is secured to the ground to prevent it being taken as well.

Trail camera's - get a good photo of the perpetrator for the police and to post on social media. In my experience the thieves do not travel that far for their chickens and someone in the local community is bound to know who the individuals are. Imagine the look on the thief's face when he turns up at the auction mart to find his picture on their notice board.

Have You found this useful? - Let me know. Have we missed anything?