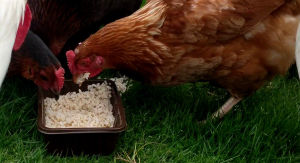 Rice is a type of grass and is the most widely produced and consumed cereal grain on the planet, but is it okay to feed to your hens and chickens? Well, mine love it and have had it both raw and cooked in small amounts and they do very well on it. You only need to look at the picture at the top of this page or the videos below to see how fast them eat it when it is available to them.

If you think about it logically the plants that humans selected to grow as rice would have been part of the natural diet of the chicken for many thousands of years and the systems of birds evolved to deal with grains very well.

As part of my research for this article I soaked some rice overnight and in waters of various temperatures to see how long it took to absorb water. Rice in cold water hardly absorbed any water at all and the figures were not much different for rice kept at 40C, just above the body temp of a chicken. The digestive process of chickens completes in 6 to 8 hours and the rice would be digested before it had the chance to absorb more the 5% of it's own weight in water.

Rice is almost pure carbohydrate and has only 4.4% protein which makes it a poor food for chickens but as a treat or if you are feeding a few spoonfuls of your leftovers to your flock it is excellent. I think cooked rice must make my chickens think they are maggots as they eat it fast.

Rice contains small amounts of calcium, iron and potassium and should be a small part of the diverse diet chickens can have.

Is rice healthy for chickens?

Chicken can both eat and digest rice and rice products much more easily than humans, their digestive system has many thousands of years head start over ours when it comes to whole grains.

Some experimental data from Japan shows that chickens that are fed large amounts of rice in their diet have much paler yolks than normal.

As far as it being a quality feed for chickens it is a little on the carbohydrate heavy side and too much of it in the diet can leave chickens with diarrhoea and messy vent feathers. It may also impact the egg production if you give more than 20% by weight of the diet as rice and don't free range.

When it comes to rice it is more a problem of what has been added to the rice than the rice itself.

Limit the quantities and you will be just fine.

Chicks and baby chickens up to the age of at least 8 weeks should receive the bulk of their feed as a specialist chick crumb produced for chicks or growing chickens. Baby and growing chickens can eat rice but this is one time I would suggest it should be cooked to make it easier to digest.

Chicks may not have the access to grit and shell to help the gizzard grind down the whole grains so it should be given as the more easily digestible cooked rice and never more than a few grains per chick.

Yes and they love it.

Below: Here is mine Getting it down their necks as fast as they can.

Cooked rice is an excellent treat for cold winter mornings as it can be served warm and is easily digestible and gets the hens of the perch and moving straight away.

I have seen rice listed as an ingredient on some chicken feeds.

There is a myth that people stopped throwing rice at wedding because birds and chickens were eating it and it was exploding their insides. I have several Chickens keeping colleges across the far east and one in the Caribbean and most of them feed their chickens quite a lot of raw uncooked rice.

Is raw rice bad for chickens? No, not at all. And it will neither swell inside their crops or do them any harm at all.

Below: Mine love all rice, whether it is cooked or not.

The rice will be ground up in the gizzard before being completely digested just like any other grain the chickens ate.

Brown rice: Brown rice is a little more nutritious than plain white rice and has more fibre but it will be digested by chickens just fine.

Wild rice: Wild rice is fine for chickens as it is close to grass seed which chickens eat all the time when they are free ranging

Arborio, risotto or short grain rice: These are the types of rice used to make risotto and are characterised by their sticky and starchy nature. Short grain rice is fine for chickens in small quantities but be wary if you have added salt during the cooking process. Too much is bad for chickens.

Basmati Rice: Basmati is a fragrant rice and I have heard it said that the taste of the basmati may come through in the eggs. Whether this is speculation or it actually happened is another thing. I may test this one day soon from an interest point of view.

Rice pudding: This has added sugar and so should be avoided in any sort of quantity. A few spoonfuls of pudding rice is more than enough for the average backyard flock.

Flavoured, spiced and pre-mixed rice: This stuff can be as much as 3% salt which is way too much sodium for chickens to deal with. It can lead to watery egg whites and other issues. Again if it is just a spoonful or so left over from your table then that is fine but be really careful.

Rice krispies and rice based cereals: There is an issue with rice krispies and popped rice cereals as a whole, I'm not going to pick on one brand, they are all as bad as each other when it comes to additives. They contain up to 2% salt which is way over the 1% max for chickens and cereals meant for human consumption are often fortified with vitamins and minerals which are of little use to chickens and could even be harmful in the sort of amount they add to human food.

Never give frosted or chocolate rice to chickens as this will be way to much sugar and chocolate is poisonous to chickens.

Rice cakes: Rice cakes are essentially a compressed puffed rice cake that is often sold as a low calories and filling snack for humans. They contain large amounts of salt and have little in the way of nutrition so if you have some going out of date in your cupboards then by all means toss one a day to the hens.

Chickens are hardy omnivores that have evolved to eat a wide variety of food depending on what was available during the year. Selective breeding for egg production means chickens need a wholesome balanced feed or their health and productivity may suffer.

For a list of all the foods chickens can and can't eat.