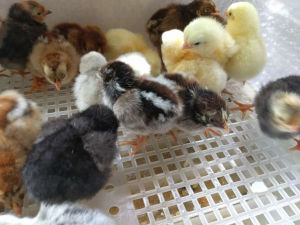 When should you move chicks to a brooder?

You should wait at least 12 to 24 hours after the last chick has hatched before moving the chicks to the brooder. After 24 hours have passed the chicks should be dry and fluffy and you can move them to a ready warmed brooder.

When they first hatch they are wet and there are periods of deep sleep where consciousness seems to come and go. You must leave them until they are up and about and dry.

Below: Some just hatched Barnevelder chicks sleeping in the brooder.

Pipping, unzipping and hatching takes an enormous amount of energy and chicks should be allowed some time to sleep and rest as they dry out properly.

Drying and transferring to the brooder:

How long the chick should stay in the incubator is a matter of personal judgement. I leave mine a full 24 hours after hatching. I also do not help chicks to hatch.

Below: These chicks are dry and ready to be moved from the incubator to the brooder.

These chicks that hatched at the same time were more than happy to rest and sleep.

There is enough resources in the yolk to sustain a chick for 72 hours at least so do not worry, a night in the incubator will not do them any harm.

So resist the temptation to open the incubator too soon. The chicks will be fine in there for 24 hours and even 36 hours if they need to be.

When chicks emerge they stumble around the incubator not able to keep control of their legs. They knock into other eggs which have not yet finished hatching. There is evidence that hatchlings encourage the rest to hatch, in particular with their peeping.

After chicks hatch in incubator you should open all the vents and allow the humidity to fall as far as it can to facilitate the drying of the baby chicks.

How long can a chick live in an incubator?

A chick can stay in the incubator for up to 36 hours.

You can't use an incubator as a brooder, Keeping chicks in the incubator for more than 24 hours will make a huge mess. The chicks will begin to poop and their fluff will gum up the working apart of the machine in no time at all.

After 24 hours they will need food and water and chicks are messy as they learn to eat and drink.

Below: once they are dry, chicks should be moved to the brooder straight away.

It takes 12 to 24 hours for the chicks to dry properly after hatching and they should be left in the incubator to dry off and fluff up. Newly hatched chicks are sustained by the yolk and can survive without food or drink for as much as 72 hours after emerging from the shell.