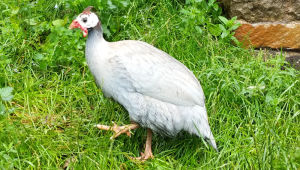 Catching Guineas is difficult and you generally only get one chance, after this panic sets in and birds charge around screeching.

How do you catch a Guinea fowl?

Guineas as a rule don't particularly like being caught, held or touched. There are always exceptions and I have seem some really friendly ones but it is rare.

It's good to have a helper to help hold the bird once you get the bird into a well lit room. Beware of the claws and beak as they can hurt you badly.

A blanket method never really works for me, the birds just scatter and panic.

If I need to check a bird out I try to catch it at night, in the dark, and grab them with both hands around the wings and body I pluck the bird right off their perches and hold on tight, then tuck it under my arm like a football with the head facing to the back.

Below: By far the easiest way to catch Guinea fowl is early in the morning when they are asleep on the perches.

You can grab hold of them one at a time and they are still asleep on the perches.

If I need to do daytime catches I use as a catch cage. I have a medium sized wire pet crate works well enough as a trap. Then I can reach in and grab the bird or birds I was originally after. They still freak out, but not nearly as bad.

The cage need to be sited where you can shuffle them into it and you need some sort of funnel to channel them all in the right direction.

Sometimes I can get away with tossing some scratch in the cage and they just run right in for me. The  cage method works best for me, less stress on the birds and I get kicked and pecked less. And it works any time of the day.

I also have a catch net, but that causes a lot of panic too, especially if you don't have much practice on your catch technique. You need to get them the first time, or it gets crazy on the 2nd try, and only worse after that.