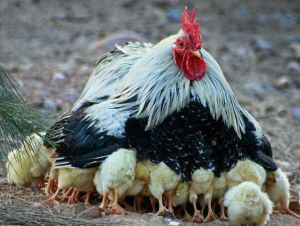 Roosters can and do brood chicks to warm them up but they will never sit on a clutch of eggs to hatch them. In my experience it is conditional and breed dependant.

I first saw this a great many years ago with my Barnevelders, a large soft feather chicken breed known for being good natured and docile. After I had let them out one morning I was treated to the sight of my large rooster stood still with 14 chicks under his wings.

The hen was busy feeding and her chicks just wandered underneath him. He didn't show the same dedication a mother hen would though.

This is a limited behaviour meaning it doesn't happen often and is entirely down to whether or no the rooster feels like standing still for a bit. I have roosters that will happily spend the better part of the day helping a hen with her chicks, he is there for protection after all.

Below: This roosters fame has spread far and wide after he assumed the role of mother hen in raising the brood of chicks she hatched.

Mother hen was taken by an eagle leaving her fluffy babes without a mum.

Now this rooster dedicates his entire life to their care. He shows them how to find food, when to seek shelter and he keeps them warm under his wings. Admittedly, he's sometimes a little clumsy. But his compassion and patience more than make up for his lack of elegance and grace.

In the good old days Surplus roosters being raised for meat would be caponised. This is a somewhat barbaric practice that has been banned in many parts of the world but is still occasionally practised.

Also they will not crow or grow large combs and wattles or indulge in any male chicken behaviours like wing beating or titbitting.

It was done because a Capon will grow to almost 3 times the weight of a hen and the meat will be more tender as there are no male hormones.

Having Capons around in the flock meant that they didn't fight like intact males would do and you had a helping hand incubating, hatching and brooding while the hens were still laying eggs.

Can a rooster go broody?

No. I have never seen or heard of a broody cockerel or rooster sitting on eggs to hatch them.

It does happen that male chickens with damaged or removed testicles start to behave like hens but they are no longer true roosters.

Some rooster do have the odd habit of sticking their heads into the nest boxes and clucking at the hens. I have also seen roosters settling in nest boxes and I wonder if it is this that has led to reports of broody roosters.

Can baby chicks be with a rooster?

For the most part yes, baby chicks can be with and get on just fine with the roosters and cockerels.

It depends of the temperament of the male and there is two real exceptions to this rule. Firstly if you have more than 1 male in the flock or if you have young "teenage" cockerels about.

Below: Some Cockerels are just better at the whole dad thing than others.

The fighting or even just friendly sparring between males can easily kill chicks.

I have had roosters and cockerels that I would not trust with anything but you know your birds and the average keeper with a male and six to twelve hens will never have any trouble at all.

Will a rooster harm chicks?

They can do but as a rule no. They are there to procreate after all. It does happen by accident occasionally.

Even a hen bullying a chick can kill it so this is not a problem specific to the male of the species.