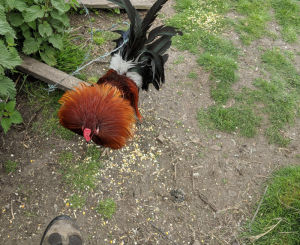 I breed chickens and currently have around 36 roosters and some are easier to manage than others.

Chickens can produce eggs without a rooster and can do so almost daily. These unfertilised eggs are consumed or sold. However, a rooster must be present for a hen's egg to be fertilised and produce chicks.

Egg production in chickens is not dependent on having a cockerel in the flock. This is true for many species, human female ovulate whether they have a partner or not.

Below: This selection of eggs was produced by my dedicated egg flock and they have never been with a rooster.

There is an argument that says hens without rooster in the flock are happier because they are nor being pestered all the time and having there neck feathers pulled by amorous males. Adding a rooster to your flock comes with benefits but it will not make any difference to your egg production in any way at all, either for the better or worse.

Can hens produce eggs without a cockerel around?

During ovulation, hens release an egg from the ovary. If a rooster is present, the egg can then become fertilised and produce adorably fluffy chicks but the hens' eggs do not need to require fertilisation to be produced by the hen.

The eggs you buy at the grocery store are likely unfertilised, so they will never hatch because commercially it makes no sense to feed roosters just to have them around.

Egg production happens whether a rooster is present or not.

Hens only have one ovary, which looks similar to a cluster of grapes. The groups are called follicles, which are the egg's yellow yolk when laid. The follicle, or mature ovum, is then released from the ovary, which is the process of ovulation.

The follicle then travels down the hen's oviduct, a long tube. During this time, the albumen, or egg white, is formed around the follicle, or egg yolk. A shell membrane and the shell them form around the egg white.

At this point, you would be able to recognise the egg, as well, an egg. The yolk and egg white, along with the shell, are completely formed.

The hen then lays the egg and the entire process takes approximately 27 hours. Farmers bred chickens so that they produce eggs daily, while wild birds lay eggs much more infrequently.

Eggs laid without a rooster present are unfertilised, so they will not become chicks and the same is true of most wild birds. I have found nest before with eggs in that were clearly not fertilised.

Benefits of Having Roosters:

Make sure there are no local ordinances that prohibit you from keeping a rooster on your property. If you are within city limits, likely, you are not allowed to have a rooster.

You can hatch your own chicks: You need a rooster around to have sweet, adorable chicks running around and chicks can bring in extra income and maintain your flock population.

Flock protection: A rooster will watch over his hens and let them know if a predator is lurking and his alarm call will gather up all of his hens and herd them to safety.

Eye candy: Most pure breed rooster are good to look at.

Drawbacks of Having Roosters:

Besides being noisy little fellows, what are some of the drawbacks of life with a rooster?

Roosters make for tired and bald hens: While a rooster may be protective of his flock, he can also be a bit, well, eager. Roosters are known to want to mate a lot, like dozens of times a day.

This can become not only tiresome for the hens but cause feather loss as well. One solution is to have your hens wear a vest, or chicken saddle, to stop her feathers from falling out.

Roosters crow: Roosters are known as "nature's alarm clock," but do not be fooled. Roosters do crow in the morning, helping you rise and shine, but they also crow all day long. ALL DAY LONG!

If you have Neighbours, or just like peace and quiet, a rooster might become a big issue.

Roosters can be mean: While roosters have a protective and loving side, they also have quite the mean streak. Roosters are dominant, aggressive, and have spurs that can be painful, both to you and the hens.

Hens do not need roosters to lay eggs so if you are in the business of keeping hens around solely for their company and their eggs, a rooster isn't needed.

However, if you want protection for your flock or fertilised eggs that will bring sweet little chicks to life, then you need a rooster.