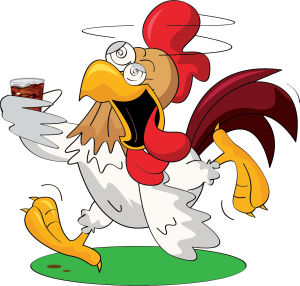 There have been several mass bird deaths attributed to alcohol consumption, usually the left overs from wine making, and a conversation with my vet revealed that the worst drinking offenders are actually parrots, although he has dealt with a few chickens over the years that have consumed alcohol of some sort and the result was almost universally bad news for the chickens.

You should never feed your chickens any form of alcohol, even beer. Alcohol is toxic to some animals and they do not have the benefit of tolerance like humans do.

I have had to deal with a blind drunk cockerel and it wasn't fun. He had a few sips of rum at a party one weekend and then spent 4 hours laid flat out on his side making funny noises and occasionally kicking a foot

Can a chicken get drunk?

Chickens can easily get drunk, just a few sips of just about any alcoholic beverage is enough to get the feeling the effects of ethanol.

Below: Chickens can get drunk easily.

They will also have a bad hangover that may last longer.

Ethanol is absorbed quickly by the body and will enter the bloodstream in a few minutes.

Why does my chicken seem drunk?

Sweet fruit and raisins can ferment into alcohol. Raisins are 14% sugar and will ferment quickly.

My granddad told me of an old trick that poultry showers used, by soaking whole wheat in strong whisky and giving it to an opponents birds in show cages. This had the effect of making the birds drowsy and sleepy and would get them disqualified.

Does your neighbour not like your chickens, they could be soaking raisins in booze and feeding them to your chickens.

Antifreeze is a additive that prevents the radiator in vehicles from freezing or overheating and is often referred to as an engine coolant.

While antifreeze is water-based, it also includes liquid alcohols such as ethylene glycol, propylene glycol, and methanol.

If consumed it will intoxicate animals, followed by drowsiness or coma, similar to ethanol. Ethylene glycol poisoning happens predominantly because of the products produced by metabolism in the body.

If you feed fermented feed and get it wrong you could be giving your chickens quite a lot of alcohol. You could effectively be making beer for your chickens.

How do you know if your chicken is drunk?

A drunk chicken will exhibit similar symptoms to humans when inebriated, it will stagger around, droop it's head or may fall over. Chickens are unable to vomit up the contents of their stomach so if they ingest a fatal dose it will kill them.

The one I had to deal with flopped down on its side, unable to stand, and occasionally flapped a wing or kicked out with a leg. The head gets pulled backwards over the shoulders and the eyes stay open and staring.

Below: One hammered rooster laid out on his side after a sip too much rum.

They then sleep a lot for a day or two.

Is alcohol bad for chickens?

Yes, alcohol is bad for chickens and all poultry. A chicken that has been allowed to get drunk on beer, cider, wine or spirits may end up with the following injuries or problems:

Also bear in mind that birds have no built up tolerance to alcohol like humans have.

Quite a few drinks, especially spirits with mixers contain massive amounts of sugar which is not good for chickens.

The lethal dose of alcohol in birds is between 2g/kg and 3g/kg. So if your chickens weighs 3kg the just 4g of pure ethanol will kill it. Depending on your brand and the strength, this translates to around 60ml of beer, 45ml of cider, 25ml of wine or 10ml of spirits.

Chickens do like beer and will drink it. I used to run a Public house and bar and we kept chickens out the back and they became quite a problem trying to get into customers drinks. From my experience chickens seem to like beer and once they have had a taste for it they will seek it out again.

Below: Chickens should never be allowed booze!

Drinks are often sweet and sugar is addictive to chickens, all the more reason not to get them started on bad habits.

How to treat a drunk chicken:

If you catch it in the act you can turn it upside down quickly and massage the crop to make the chicken return the watery contents.

You can take them to a vet but the likelihood is that by the time you get there any alcohol consumed will have been absorbed already and the damage done.

Otherwise any other treatment is supportive. Isolate in a box with a towel and some water and leave for an hour or two to see how it gets on.