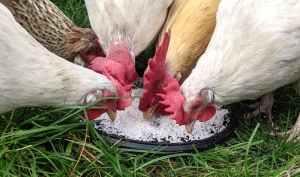 Chickens love coconut and you can feed it fresh or dried. You can use it to make homemade peck blocks to keep your chickens happy - Recipe and guide below.

Below: My hens eating desiccated coconut. You can see how much they like it.

Coconut is safe for chickens as long as it has not been sweetened. The extra sugar is bad for hens and will disrupt the balance of nutrients in their feed.

You can feed your chickens fresh coconut, coconut water , coconut milk and dried or desiccated coconut without any problems at all. Coconut oil is a saturated fat and should be used sparingly in chicken feed.

Coconut meal is the dried byproduct of coconut oil production and is often used in animal feeds.

Coconut meat is the whole white inside and is fine for chickens. It is hard work for them to peck at and makes a good hanging treat to keep the amused in a run.
Can chicken drink coconut milk?

Coconut water is good for chickens and has the added benefit of being completely sterile when straight from a fresh coconut. Coconut water can be used a tonic for chickens recovering from illness or needing support.

Coconut milk is fine for chickens as long as it has not been sweetened.

Coconut cream is fine as long as it has not been sweetened.

Coconut husk is indigestible and should never be fed to chickens.

Coconut flour can be fed to chickens. I use it in my peck block recipe below.

Is coconut good for chicken?

In one 168 day long trial, 240 leghorns were studied to assess the effect of both coconut meal and coconut oil into the diet of laying hens.

The study found that a diet with 10% coconut oil increases the weight of the chickens and was counterproductive.

Fresh coconut is a little low in protein to be an excellent feed for chickens but it is rich in minerals and trace elements. Dried coconut or coconut meal has a better nutrient profile and is often used in poultry feeds.

Below: My chickens waste no time when eating coconut.

You can feed coconut to chicks and baby chickens as well in very small amounts.

Coconut also contain Manganese, Copper, Selenium,  Magnesium, Phosphorus, Iron and Potassium. Recommended daily amounts are for human consumption and not chickens so they are really irrelevant.

What does coconut oil do for chickens?

Coconut oil is good for chickens and is very useful. You can use it to make tasty treats for chickens and also as a treatment for scaly leg mites and as a barrier dressing for minor skin wounds.

Much of the fat in coconut is in the form of medium-chain triglycerides (MCTs) which are metabolised differently in the body to other types of fats. They are absorbed directly from your small intestine and rapidly used for energy.

Here is the recipe for a coconut oil based pecking block for your chickens:

Coconut oil is liquid above 78 F or 25 C so these blocks are best for cooler times of the year.

Below: The finished peck block looks like this. You can halve the ingredients for smaller flocks.

Below: The ingredients for the treat block.

It is especially good as the winter approaches and the chickens begin to moult as it provides extra energy just as they are growing new feathers.