Is it OK to feed bananas to chickens?

The answer is yes, you can feed bananas and plantains to chickens but ideally only in small amounts.  Chickens love banana and they are rich in potassium, minerals and some vitamins.

Below: A video of my egg flock demolishing a banana in a few seconds.

Unfortunately they are also rich in sugar which is bad for chickens in large quantities and being a soft fruit poultry may have crop problems from eating bananas.

Below. A chicken eating a banana. 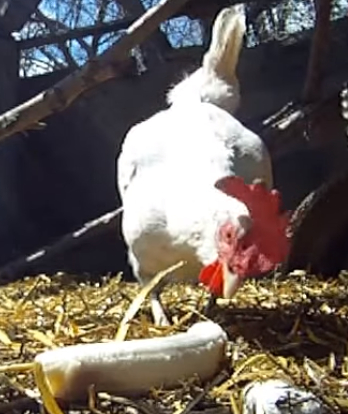 One banana contains about 400mg potassium, humans need more than ten times that every day, or 4,800mg, to stay healthy. It is physically impossible to eat enough bananas to kill you and the same is true for chickens. A single chicken would need to consume more than 20 bananas in a session to get enough potassium to kill it.

How do you feed chickens a banana?

Probably best to split it open or peel it for them. Only chickens with advanced skills can peel bananas. It can also be sliced into rounds.

Below: The best way to feed bananas to chickens is hang them up. 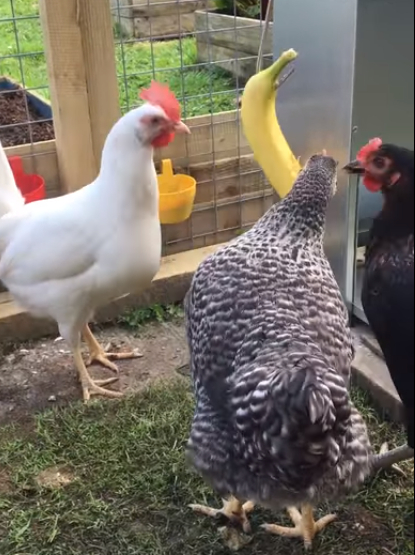 My favourite way is to hang them up one at a time up in the run for them to peck at as this helps keep your flock amused. This also has the benefit of keeping the feed off the floor.

How much banana should you give a chicken?

One fifth to one sixth of a banana is the most you should give a chicken in any one day. Much more and you risk upsetting the balance of their feed.

Should you give chickens ripe or unripe bananas?

From a certain viewpoint unripe fruit is a little better, it is firmer and has less sugar.

As bananas ripen they get sweeter and softer, both of which things are best avoided in poultry diets but chickens can eat over-ripe bananas in small amounts with no problems.

Is it safe to feed bananas to chickens?

I have seen it said on both forums and websites that bananas are not good for chickens.

As an occasional treat there is nothing wrong with feeding your poultry the odd banana. They can be frozen if needed to save them for later.

Below: Chickens certainly think bananas are safe for chickens: 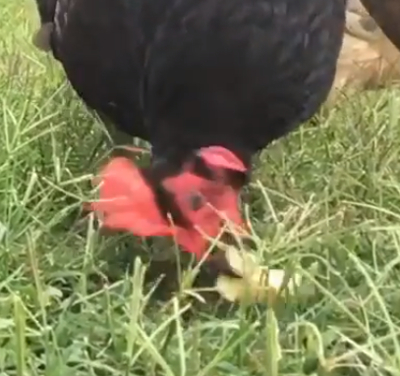 If you were to give them every day and upset the balance of their feed then you will likely suffer problems with your birds at some stage.

How to feed bananas to chickens:

In small amounts and not every day. One banana is enough for 6 chickens.

Can you feed chickens banana peels?

I have seen chickens eating banana peel. They won't eat whole ones and they have to be chopped up into little pieces.

I have never seen mine eat the skin, they just get inside and eat the fruit and leave the skins.

I would not bother purposely making a point of feeding you backyard flock banana peel for 2 reasons.

Mine never ate the skin but quite happy to demolish the insides, just crack them open and let them demolish the fruit.

Are there problems with giving bananas to chickens?

They do flick it everywhere though and get sticky feathers, or maybe that was just mine.

Too much soft food is a problem for chickens and can lead to crop problems.

The sugar in fruit can give chickens sour crop.

You will see chickens wiping their beaks on the ground after eating bananas, this is because they don't like having stuff stuck to their beaks . A common problem when eating mushy feed like soft fruits.

For a full A to Z list of suitable chicken foods.