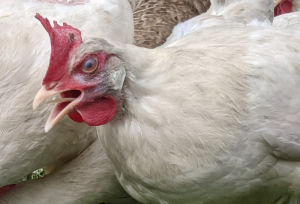 Aspergillosis is also called brooder pneumonia because young birds catch it from damp litter in the brood chamber.

Aspergillosis is not a contagious disease in chickens.

Aspergillosis in chickens is caused by inhalation of the spores of a fungus, Aspergillus fumigatus although other species of the fungus may be involved.

The spores are highly resistant to disinfectant.

The incubation period for Aspergillus is of 2-5 days.

The most severe outbreaks usually occur in birds 7–40 days old.

How do chickens catch Aspergillosis?

Chickens usually become infected with Aspergillosis by inhaling dust-laden air containing spores or by ingesting spores. Small number of spores can be tolerated by the body, but large numbers can cause disease.

A minimum of five million inhaled spores may be necessary to produce fatal infection in day old chicks and at least 17 million spores are necessary for an adult bird to become infected.

The inhaled or ingested spore’s lodges in the air sac or digestive tract and begin to develop.

Once the Aspergillus fumigatus infection has become established, the fungus produces poisonous substances or toxins which may damage various tissues. The toxin is hemotoxic (destroys blood cells), neurotoxic ( nerve cells), and histotoxic (interferes with the bodies ability to use oxygen).

Acute Aspergillosis is less common and is typically seen in young, immune compromised birds. In acute cases, generally the trachea and air sac are affected. The lungs may also be involved.

If the large air sac is involved, the wall become thickened and pneumonia develops. If the small air sacs of the bones are involved, osteoarthritis will result.

Chronic Aspergillosis is more common, it remains asymptomatic until the disease has progressed well. White nodules appear in the respiratory system and ultimately erode through the tissue, and large number of spores enter the bloodstream.

The spores then travel throughout the body, infecting multiple organs including kidneys, skin, muscle, gastrointestinal tract, liver, eyes, and brain.

Aspergillus does not normally cause a problem in healthy birds. Predisposing factors allow its development.

Aspergillus grows and sporulates readily in warm and moist environments.

Any age may be affected but there is high mortality in young chicks (in brooding). In adults, a few birds are affected at a time.

Prolonged use of antibiotics or corticosteroids.

What are the symptoms of Aspergillosis in chickens?

Signs may be respiratory, digestive, or nervous and depending on the severity of the infection may follow an acute or chronic course.

General symptoms of Apergillosis in chickens include:

Morbidity may reach 10 % of the flock. Severe outbreaks associated with water contamination may result in up to 15 % chick mortality during the first two weeks.

Diagnosis of Aspergillosis in chickens:

Lesions, especially in the lungs are characteristic. The fungus grows readily on Sabouraud’s dextrose agar and can be cultured for identification. The colonies are green to bluish green at first darken with age to appear almost black.

The internal nares and sinuses may fill with a yellow cheesy nodular mass.

Lungs show acute diffuse pneumonia (Brooder Pneumonia). The nodules vary from pin’s head to pea size (1-3 mm) and consistency and mycelial masses may be seen in air passage and bronchi.

The air sacs are thickened and grey and the walls of the air sacs may be covered with a fur like growth of green mould.

Firm caseated nodules, so called buttons attached to the walls.

A necrotic masses may be present under the nictitating membranes.

Demonstration of mycelial elements in the lesions. Remove small pieces of the colony from air sac lesions for direct mount. Crush a piece of nodule, tissue, or scrapings in 10 % potassium hydroxide between a cover glass and a slide. Stain with lactophenol cotton blue. Mycelia structures seen.

How do you treat Aspergillosis in chickens?

As a rule Aspergillosis is not treatable and sick birds are normally slaughtered.

Treatment for Aspergillosis include:

Can Aspergillosis be cured?

The prognosis for Aspergillosis varies significantly depending on the severity of the disease.

Cases are mostly sporadic rather than a flock problem. Treatment is normally useless and the affected birds are slaughtered and the fungus infection sources are removed.

Anti-fungal drugs are administered orally, topically, by injection, or nebulising, depending on the drugs and organ involved.

How do you control Aspergillosis?

Prevention and control of Aspergillosis:

Aspergillosis can effect humans but is not considered to be a contagious disease. The backyard keeper may inhale or ingest aspergillus spores from the bird’s environment. This is a particular hazard for pigeon fanciers.

Birds with aspergillosis would not be considered edible due to the extremely poor condition.