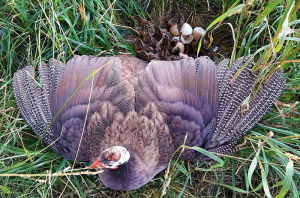 Guinea fowl are different to chickens and are not social creatures in the same way hens are. The rule for the majority with Guinea fowl id the males are the aggressive ones and the hens are more placid. The exception to this is if a Guinea hen has baby keets, she may attack anything she sees as a threat to her.

Guinea fowl can become aggressive of food, a mate, water and territory so if you have a mixed poultry flock you should make sure they have enough space and have two sources of feed and water placed a good distance apart from each other.

Another exception to this rule is lonely Guineas. If you have a flock of Guineas and now you have only one or two left they can become aggressive through fear. They are used to the protection of a flock.

One common reason for Guinea fowl aggression is a nesting Guinea hen. Males will protect the hen and the nest and will tip their wings up and chase anything that gets too close.

As a rule Guineas will not kill chickens but that doesn't mean it can't or will never happen.

I have a lot of Guinea fowl and chickens and my flocks get along just fine. However this is not everyone experience and I have 27 Guinea hens in my eggs flock with no males.

Below: Guinea fowl and hens get along just fine most of the time, it's the boys that complicate issues.

With my Guinea colours the males sometimes chase the chickens and will occasionally run into them but they have never injured or killed other or even had a fight like some of my roosters have had in the past.

Young Guineas choosing a mate can be aggressive but this usually settles down after a few weeks.

How to deal with aggressive Guinea fowl:

Aggression in Guinea fowl is an instinctive behaviour and there is little you can do about it. There are a few things you can do to help keep the peace in your flock.

An aggressive Guinea will tip it's wings up and spread them slightly to make itself look much bigger and then it will charge. They kick, bite , scratch and just plain bulldoze into you and can be quite intimidating.

Are Guinea hens aggressive towards chickens?

Guinea hens are not generally aggressive to chickens or other poultry types. Again the exception is if she has baby keets in her care she may attack anything that comes near them.

Guinea fowl are the most aggressive to other flocks of Guinea fowl. In the wild they rarely live in flocks of more than 30 and I have found if you exceed this number then aggression is more likely. In the wild this would split a family group into two or three parts that spread out and find new territory but this can't happen in the backyard.

I have been charged at by a Guinea hen with young keets and have been attacked by a male Guinea fowl so yes, Guineas will happily attack humans. They have no concept of their own size and will go after humans, turkeys, ducks and chickens if the fancy takes them.

Guinea fowl are not really domesticated like chickens, ducks and turkeys are and are much more instinctive in their behaviour.

Guineas fowl males are by far the more aggressive of the species although a hen with keets will come a close second. More on Guinea males.